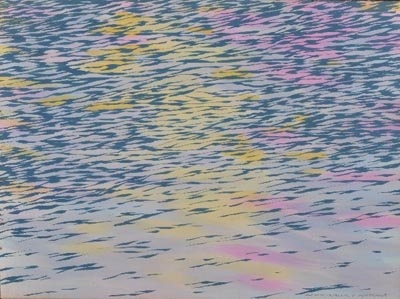 Nigel Waymouth was born in India. His early childhood was spent in Argentina until he moved to England in 1953. He was educated at St Lawrence School and at Harrow Weald County Grammar School, under the tutelage of the future Home Secretary, Merlyn Rees. He graduated in economic history at University College London.
Following this, he attended art courses at various London art colleges. On leaving University college he also spent eighteen months working as a free-lance journalist, writing features on social issues for medical journals and editing an employment magazine. In January 1966 he and two partners, Sheila Cohen and John Pearse, opened the original rock-chic fashion boutique, Granny Takes a Trip.
Waymouth was responsible for the constantly changing shop fronts; he also designed the interior decor and many of the early clothes. While still involved in Granny Takes a Trip, in 1967 he teamed up with fellow artist, Michael English, and began designing many of the quintessential British pop posters of that era with.
Their partnership lasted nearly two years under the name, Hapshash and the Coloured Coat. Most of the originals of these graphic designs and some of the clothes are now in the permanent collection of the Victoria and Albert Museum. In the fall of 2000, the museum held a large retrospective of the Hapshash and the Coloured Coat work. The Tate Gallery in Liverpool also included many of these designs in the "Summer of Love Psychedelic Art, 1967" exhibition in 2005, which traveled to Brooklyn in the summer of 2007.
Since 1970, Waymouth has pursued a career as a painter, and portraitist. His work has been exhibited in Fischer Fine Art, London (1977, 1978, 1979); Alex Reid & Lefevre, London (1984), Jonathan Clark Fine Art, London (1988), Keller & Greene, Los Angeles (2005), Jonathan Cooper Park Walk Gallery, London (2006).
He has been included in the Royal Society of Portrait Painters group show. His works have been commissioned and collected by Mr. and Mrs. Rupert Murdoch, The Duchess of York, The Duke of Devonshire, Mr. and Mrs. Tom Hanks, Mr. Dominick Dunne, Dame Diana Rigg, Mr. Peter Morton, Mr. & Mrs. Eric Idle, Dr. & Mrs. Mortimer Sackler.
Nigel Waymouth lives, and works in Los Angeles. He is married to the Pulitzer prize winning photographer Marissa Roth. He has two sons by a previous marriage, the actor, Louis Waymouth and sculptor, Adam Waymouth.