Antique CHARLES CAMERON BAILLIE OIL PAINTING ON BOARD OF SOUTH PACIFIC NATIVE ISLANDERS IN A BOAT WHICH ONCE HUNG IN A LUXURY LINERS SMOKE ROOM & PRESENTED IN THE ORIGINAL SATINBIRCH VENEERED FRAME 56 X 29 INS | ANTIQUES.CO.UK | 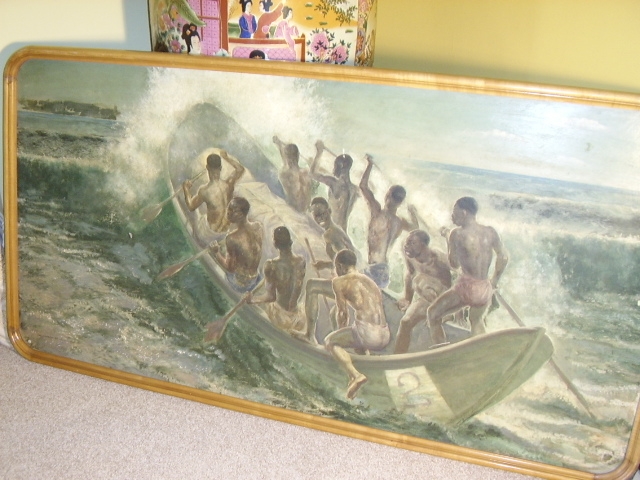 DESCRIPTION
Charles Cameron Baillie - South Pacific Native Islanders in a Boat taking out provisions to the liner on the horizon in the far distance.

Inscribed on the back "smoke room"
This painting could well have been painted for one of the Staterooms on an interwar liner or cruise ship possibly like the one to be seen in the top left corner.ABOUT THE ARTIST (LAST IMAGE SHOWS SELF PORTRAIT) Charles Cameron Baillie 1901-1960--- a painting of a South Sea Islander by Baillie is in the collection of the Hunterian Art Gallery in GlasgowCharles Cameron Baillie was an artist and designer who contributed to the decoration of the Royal Automobile Club in Glasgow as well as to the renowned Glasgow fish restaurant called Rogano's.PROVENANCECharles Cameron Baillie also contributed his works to the staterooms on the well known Queen Mary Liner as well as others constructed on the Clyde,and it is believed that this example of South Pacific Islanders was hung in the liners smoke room(as per inscription verso stating "smoke room / ship room no.655").HISTORY OF THE QUEEN MARY LINER.RMS Queen Mary is a retired ocean liner that sailed primarily in the North Atlantic Ocean from 1936 to 1967 for the Cunard Line (known as Cunard-White Star when the vessel entered service). Built by John Brown & Company in Clydebank, Scotland,After several years of decreased profits for Cunard Line, Queen Mary was officially retired from service in 1967. She left Southampton for the last time on 31 October 1967 and sailed to the port of Long Beach, California, United States, where she remains permanently moored. Much of the machinery including two of the four steam turbines, three of the four propellers, and all of the boilers and fixtures and fittings were removed.The ship now serves as a tourist attraction featuring restaurants, a museum, and hotel. The ship is listed on the National Register of Historic Places.CONDITION
There has been some careful re-touching to minute paint losses around area of signature and right hand margin edge,which now looks absolutely fine. The painting has the oroginal solid marine ply backing and is in nice dry condition. MEASUREMENTS
Height 29 Inches (74cm)
Width 56 Inches (143cm)
Depth 1.75 Inches (4cm)TELEPHONE ENQUIRIES: 07765 856171
HOURS 10AM-10PM 7 DAYS A WEEK BY APPOINTMENT ONLY.DELIVERY UK MAINLAND & WORLDWIDE
QUOTES AVAILABLE ON REQUESTOUR REF 0501