bust of churchill - by stephen kettle 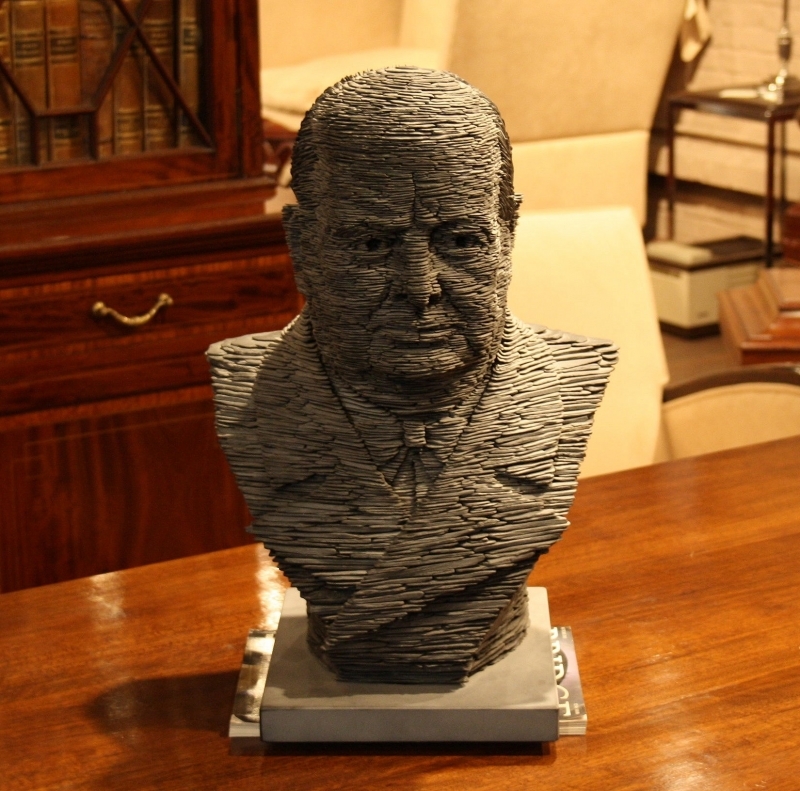 Loveday Antiques has 36 antiques for sale.
click here to see them all

This work is an original sculpture of Winston Churchill by well known British artist Stephen Kettle, comprised of over 27,000 pieces of Welsh slate on a stone base. Stephen Kettle was born in Castle Bromwich, Birmingham in 1966. After leaving school, Kettle served seven years with the Royal Navy, eventually leaving service in 1989 to work in his father’s construction business. During the 15 years that followed, Kettle perfected the skills that he now employs in his sculptures, using techniques passed to him from his father and fellow craftsmen. Stone, particularly the use of Welsh slate, is the core of Kettle’s identity. Each slate piece touches its neighbouring slate on all sides, which is then held together with an invisible adhesive. Kettle’s work ranges from miniature to monumental; with both figurative and abstract pieces currently on exhibition in Museums and private collections. Over three million people view Kettle’s incredible artwork in public exhibition spaces each year. Demand for Kettle’s work in both the public and private sector is ever increasing. His most iconic creations to date are the statues of R.J. Mitchell (Spitfire designer) which is owned by the London Science Museum and Alan Turing, (mathematician, wartime code breaker and intellectual parent of the computer) which is permanently housed at Bletchley Park, along with a bust of Winston Churchill.

Now in the second generation, Loveday antiques is run by Alexander Loveday. The name Loveday has been synonymous throughout the Antiques Trade, Interior Designers and the general public for over 40 years. Alexander Loveday's passion for antiques was founded from an early age, his father David Loveday was one of the first Antique Dealers in the Antiques quarters of Islington, London. From achieving success and a good reputation within the industry, he founded a second showroom in the Kings Road Chelsea. This led Alexander, working alongside his father, to start his own business at the age of 20 and to bring his own personal style and attention to quality into the collection we have today. The stock represents an interesting and stylish mix of not only Antique furniture but Art Deco and contemporary 1970's furniture from around the world infused with some exquisite pieces of British Modern Artwork which gives the showroom a distinct and very unique feel.

Other antiques available from loveday antiques

Loveday Antiques has 36 antiques for sale.
click here to see them all