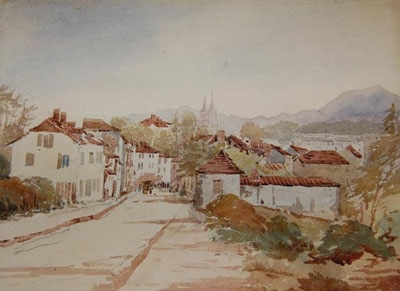 inscribed on the reverse " Bayonne - / May 3 1869"
Bayonne is a city and commune in south-western France at the confluence of the Nive and Adour rivers, in the Pyr?n?es-Atlantiques department, of which it is a sub-prefecture. In the 3rd century AD, the area was the site of a Roman castrum, named Lapurdum. It was a military site, but not a port. In 840, the Vikings appeared before Lapurdum. In 842, with their chieftain Bj?rn Ironside they launched a large-scale inland offensive and settled outside the city on the river bank. Lapurdum was an oppidum and they needed a port. Bayonne (from Basque ibai, "river") became a key place on the route between the Adour and Ebro Rivers, which served as a kind of link between the Atlantic Ocean and the Mediterranean Sea.[citation needed] This commercial route was the main goal of Danish invaders in France. By this route, they could easily reach Muslim-controlled Tortosa, which was the main marketplace in Europe dealing with slaves.
By the 12th century, the city was an important port, with a mixed Basque and Gascon population. As part of Aquitaine, it was ruled by England between 1151 to 1452 and was a key commercial centre at the southern end of the English kingdom. Its importance waned somewhat when the French king, Charles VII, took the city at the end of the Hundred Years'' War and the Adour changed course shortly afterwards, leaving Bayonne without its access to the sea. The French, however, realised Bayonne''s strategic site near the Spanish border and in 1578 dug a canal to redirect the river through the city once again. Bayonne endured numerous sieges from Plantagenet times until the end of the First French Empire in 1814. In the 17th century, Vauban built large fortifications and the Citadelle in and around the city. These proved crucial in 1813 and 1814, when Arthur Wellesley, 1st Duke of Wellington''s army besieged the city in the Napoleonic Wars, only taking it when they used a bridge of ships across the Adour to position artillery around the city.
Bayonne''s location close to the border, but also within the Basque Country straddling both France and Spain, gave it an often privileged position in commerce. Basque sailors travelled the world, bringing back products such as cinnamon and riches from piracy and the whaling and cod trades. An armaments industry developed, giving the world the "bayonet". Jewish refugees from the Spanish Inquisition from 1560 brought new trades, most notably chocolate-making, which is still important in Bayonne. Spanish Basques also sought refuge in Bayonne in the 20th century during Francisco Franco''s repression, with Petit Bayonne still a centre of Basque nationalism. Bayonne. View from the other sideBy the mid-19th century, Bayonne had declined somewhat with the centralisation of power to Paris and to the new d?partement capital, non-Basque Pau, after the 1789 French Revolution, and with Wellington''s bombardment. However, rail links with Paris from 1854 and the growing touristic importance of nearby Biarritz brought industrialisation and development. Bayonne is now part of ''BAB'' (Bayonne-Anglet-Biarritz), a metropolitan area of almost 200,000 people.