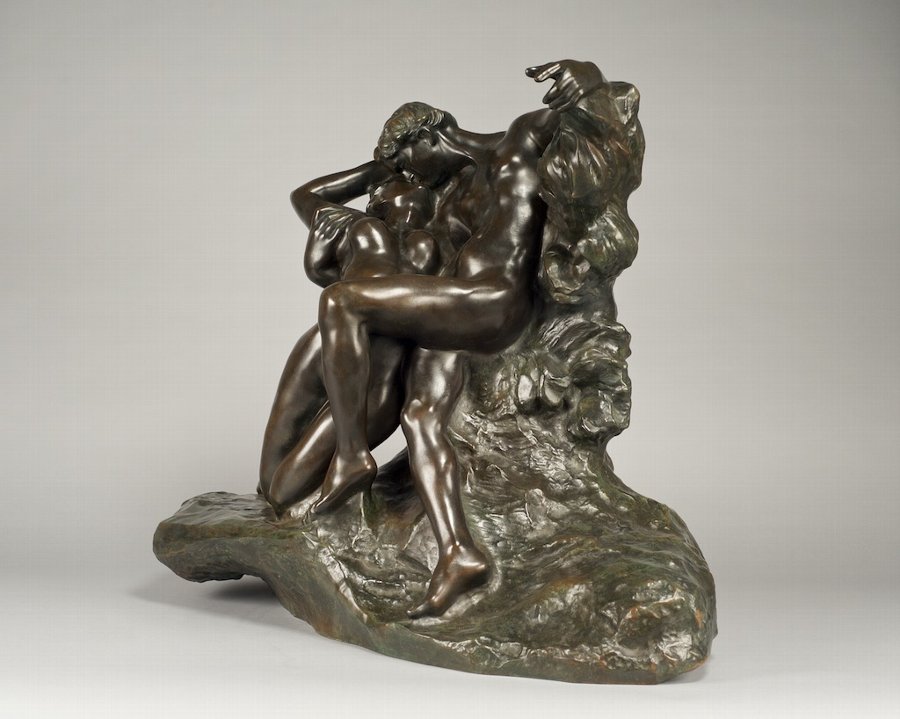 Le Baiser (The Kiss), 4th Reduction
Auguste Rodin
(French, 1840-1917)
Signed Rodin
Inscribed F. Barbedienne Foundeur
Bronze with a rich brown patina
Height:10" (25.2 cm) Conceived in 1886. This examples was cast in May 1914
The Comité Rodin states that between 93 and 103 examples were cast from 1898 and 1918
Conceived in 1886, this reduction conceived 1898. This example cast during the artist’s lifetime. The Barbedienne foundry cast between ninety three and one hundred and three casts of this model in this size between 1898 and 1918. Rodin agreed a ten year contract for the Barbedienne foundry to produce an unlimited edition of the model in 1898. The foundry produced four sizes of this model, 72cm, 60cm, 40cm and 25cm.The Kiss is one of Auguste Rodin’s most famous sculptures. It was originally conceived as part of The Gates of Hell and first exhibited as an independent group in 1887 in both Paris and Brussels. In 1898 Rodin exhibited a lifesize marble at the Salon de la Société National des Beaux-Arts.The Kiss was initially intended to represent the tragic love story of Paolo and Francesca. Dante’s Inferno tells the passionate tale of the young lovers Paolo and Francesca da Rimini who were tragically condemned to hell for their illicit love. Francesca, daughter of an important citizen of Polenta, had been forced to marry Gianciotto, the deformed son of the Lord of Rimini. It was a loveless marriage and before long the young bride fell desperately in love with Gianciotto’s younger brother, Paolo. They became lovers, but tragedy struck when Francesca’s husband discovered them and immediately stabbed the pair to death. The pair descended to hell, eternally damned.Rodin’s depiction of the embracing lovers met with a mixed reception during his lifetime. Five years before it was rapturously received at the Salon de la Société National des Beaux- Arts, the sculpture was selected to be part of the 1893 Chicago World’s Fair. On arrival, the work was relegated to an inner chamber at the fair as it was considered unsuitable for general display and only a select few were admitted to view it. Eleven years later, the life-size marble, now in the collection of the Tate Gallery, was loaned for public display to a town hall in Sussex. Local residents quickly covered it in drapes concerned that it would encourage the ardour of soldiers billeted in the town.Today, with its blend of eroticism and idealism, The Kiss is considered an iconic image of love and passion and is one of the world’s most recognisable sculptures.

Other antiques available from auguste rodin