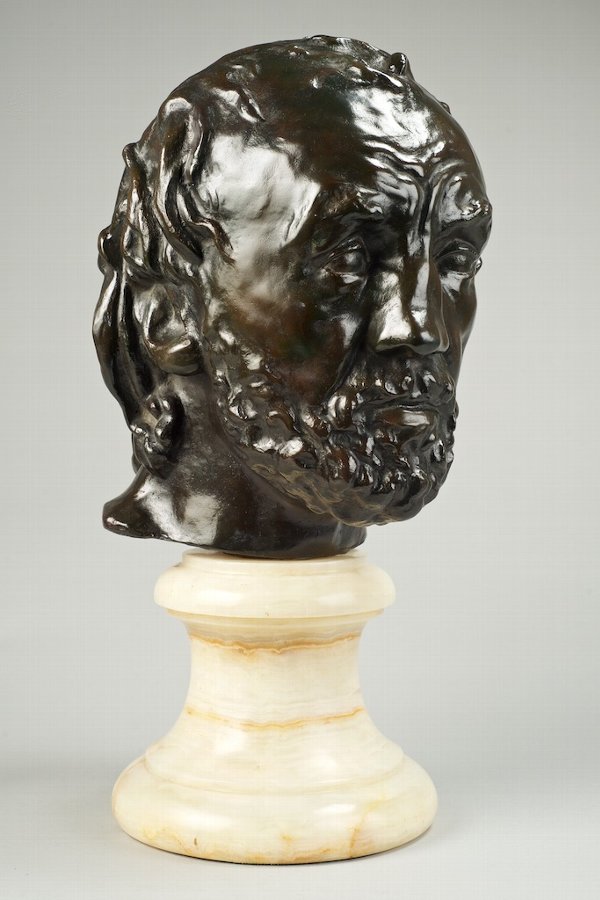 Masque de l'Homme au Nez Cassé (Mask of A Man With A Broken Nose)
Auguste Rodin
(French, 1840-1917)
Signed A Rodin with repeat raised interior signature
Inscribed Alexis Rudier Fondeur Paris
Bronze with a brown patination
Height: 10" (25.5 cm)Conceived between 1863-1864, this example cast between 1919-1923
Originally conceived between 1863 and 1864, this variant was conceived in 1903. The present example was cast between 1919 and 1923. According to the Comité Rodin due to the number of variations of the present work it is impossible to know the exact number of casts that were made.Rodin considered this portrait to be his earliest major work and described it as his first exceptional piece of modeling. He began the portrait in 1863 intending to submit it to the Paris Salon as his debut sculpture. The following year, The Man with the Broken Nose became The Mask of the Man with the Broken Nose when the cold conditions in Rodin’s studio caused the back of the head to freeze and break off. Rodin, favoring the element of chance, wanted to exhibit the portrait bust as it was. He continued to work on it for over a year before submitting it to the Salon. Much to his disappointment, the Salon rejected the work in 1864 and again in 1865, unable to accept what they considered to be a fragmentary model by an unknown sculptor.Rodin however persisted and in 1874 he commissioned Léon Fourquet to carve a marble of the model. By this point Rodin had extended the work down to the shoulders and replaced the back of the head, which had frozen off ten years previously. The work was finally accepted to the Salon and was Rodin’s first work to be exhibited there. Soon after, Rodin had the mask cast in bronze and this earlier version was finally exhibited at the Salon in 1878.The model’s debt to classical antiquity is clear and the blank eyes and thick strands of hair allude to the busts of ancient Greece or Rome, an effect that would not have been lost on its contemporary audience. Nevertheless, Rodin’s approach was revolutionary in that he combined this element of classicism with an expressive naturalism, the portrait being clearly modelled from life.The work was based on a local handyman nicknamed Bibi, who modelled for Rodin in the Saint-Marcel district outside Paris. Rodin depicted Bibi without flattery, broken nose and all, beginning what would become an ongoing exploration of unconventional beauty. Indeed, Rodin was fascinated by the inevitable decline of the human body, a process that he thought imbued personality, rather than ugliness.She Who Was Once The Helmet Maker’s Beautiful Wife, Bronze, Metropolitan MuseumMan With a Broken Nose (Complete Head), George Rudier cast, Robert Bowman Gallery