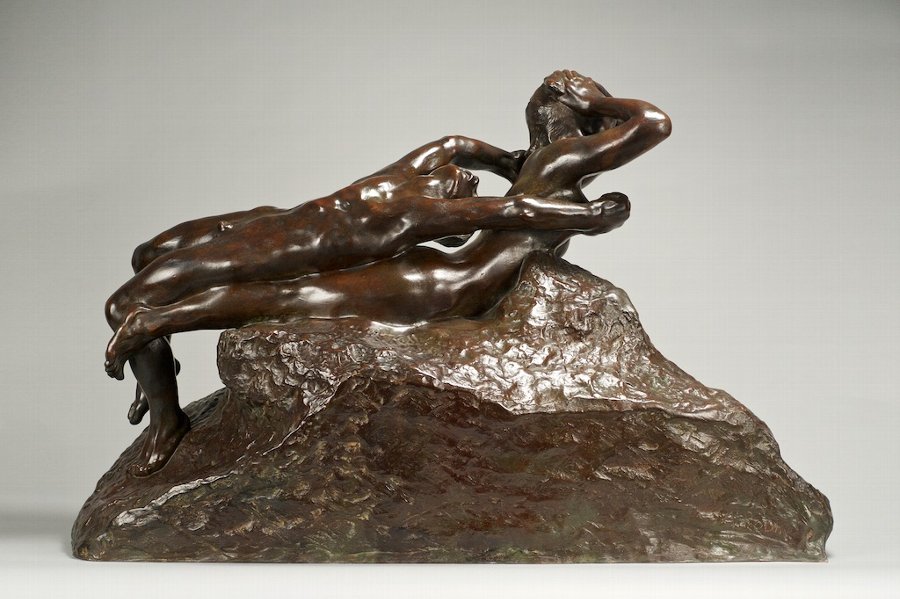 Fugit Amor, Large Model, Second Version
Auguste Rodin
(French, 1840-1917)
Signed A. Rodin with repeat raised interior signature
Inscribed Alexis Rudier Fondeur Paris, and numbered 1
Bronze with rich mid and dark brown patination
Height: 21" (53.1 cm) Conceived in 1887, this example cast between 1944 and 1945
The Comité Rodin records 6 examples in total
Conceived in 1887, this version conceived in marble between 1894 and 1895. This cast executed between 1944 and 1945. Four casts of this model, with varying bases corresponding to different marbles, were cast during Rodin’s lifetime. Two bronzes were then cast for the Musée Rodin by the Alexis Rudier foundry in 1944 (numbered 1) and 1945 (numbered 2).Originally conceived as part of The Gates of Hell, the two figures known as Fugit Amor can be seen twice on the right hand door of the great portal. A vertical configuration leaping from the surface of the gates is coupled with a second horizontal composition that appears alongside The Awakening. It was common in Rodin’s practice to reuse his figures, the male figure in the present model was original conceived for one of the children in his group Ugolino. The same figure would later be used in Prodigal Son.Inspired by the story of Paolo and Francesca from Dante’s Inferno, the sculpture was known by several different names, including, The Sphinx, The Dream, The Memory and The Evening, before finally being titled Fugit Amor.The work was first conceived in 1887. Between 1894 and 1895 Rodin had an enlargement carved in marble, which he considered to be one of his most important works. Rodin later exhibited this marble in his 1900 solo exhibition at Place de l’Alma before selling it to the collector Albert Kahn.After this original marble enlargement, Rodin ordered three further marbles, each of which differed slightly around the base. Two of these marbles are now in the collection of the Musée Rodin, Paris and the third is in the collection of the Museum of Art, Shizuoka, Japan. Rodin had four bronzes cast after these marbles using the foundry Gruet Fils.Two further bronzes, including the present example, were cast for the Musée Rodin by the Alexis Rudier foundry from a plaster taken from the original Albert Kahn marble. The present example is the only bronze still in private hands.Fugit Amor, marble, Musée RodinDetails of the Gates of Hell showing Fugit Amor emerging from the right hand door