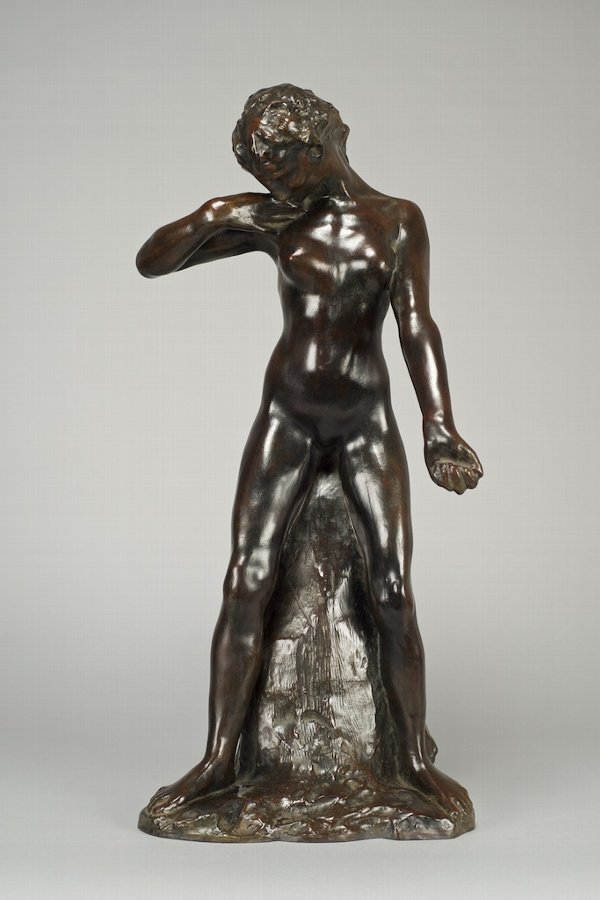 Faunesse Debout (Standing Faunesse), version with simple rock
Auguste Rodin
(French, 1840-1917)
Signed A Rodin with repeat raised interior signature
Inscribed Alexis Rudier Fondeur Paris
Bronze with dark brown patina
Height: 23 1/4" (59.1 cm)Conceived in 1884. This examples cast between 1935 and 1945
The Comité Rodin records 21 examples in total
Conceived in 1884, this cast was executed between 1935 and 1945. This model was cast eight times during Rodin’s lifetime. The Alexis Rudier foundry made five casts for the Musée Rodin between 1927 and 1945 and the Georges Rudier foundry produced eight casts after 1952.The figure of the fauness, or female faun, can be traced back to the mythology of ancient Rome where the creatures were normally depicted as half woman and half goat. Here Rodin’s Fauness appears almost entirely human and it is only the somewhat otherworldly facial features that subtly allude to her mythical nature.In ancient mythology, both fauns and faunesses were known for their love of music and wine as well as their lustful nature. Much like the sculptor’s other models depicting Faunesses, here the veiled eroticism of the model and its allusion to female sexuality would not have been lost on his contemporary audience.Rodin conceived the present model for The Gates of Hell. Another similar model, Kneeling Fauness, which itself was a variation on The Awakening, was also conceived for Rodin’s great portal and displays a similar figure in a kneeling position. Rodin included the model in The Gates of Hell before 1887, where it appeared to the right of the Thinker and next to Meditation. In this configuration it acted as the centrepiece of a group of figures known as The Judgement in the left part of the tympanum.The Standing Fauness was first exhibited as an independent work in 1899, when a plaster version was shown in both Belgium and the Netherlands. The work received a rapturous response and the critic Ray Nyst described the model as a ‘charming little standing Fauness, stretching her flesh and looking at her body.... She is life like a fresh morning rain’.