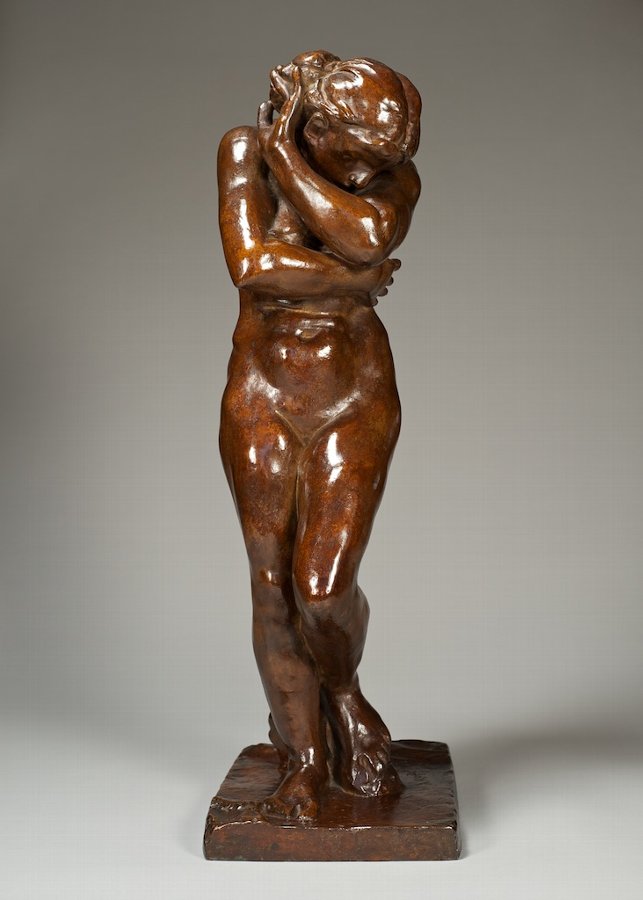 Eve, Small Model - Model with a Square Base and Flat Feet
Auguste Rodin
(French, 1840-1917)
Signed A. Rodin with repeat raised interior signature
Inscribed Alexis Rudier Fondeur Paris
Bronze with a light brown patination
height: 29 7/8" (76 cm)Conceived in 1881, this example cast in April 1947P.O.A
Conceived in 1881, this example was cast in April 1947. The small version of Eve with a square base and flat feet was immensely popular during Rodin’s lifetime. According to the Comité Rodin, it is impossible to know the exact number of casts that were made. However, the Comité estimate that around forty casts were ordered by Rodin and then the Musée Rodin by the following foundries; Froincoise Rudier, Griffoul & Lorge, Perzinka, Alexis Rudier and Georges Rudier. The last cast was made in 1967.Eve is one of Rodin’s most well-known and celebrated sculptures. He began working on a life size study in 1881, later claiming that he was forced to rework the pelvis of the figure each day, only finally becoming aware that the model was in fact pregnant. According to the sculptor, the model eventually became too tired to pose for long periods in the studio and Rodin abandoned the work, originally perceiving it as unfinished.Here we see the figure of Eve after her temptation by the Devil, turning inwards to protect her body, aware of her own sin and nudity. The work contrasted with other contemporary depictions of Eve, which tended towards representations of a figure in all of her innocent beauty and before her fall from grace.After abandoning the life size model in 1881, Rodin began work on a smaller version of the sculpture. This version, which he modelled both with a round base and square base, differed from the life size version in the hair, position of the hands and feet. A clay model of this reduction was exhibited in 1883, first in Paris and then London. The work was incredibly well received and Rodin began to commission a series of marbles to be carved. These marbles incorporated minor variations, including the addition of a rocky structure behind Eve.Following the enthusiasm for the model, Rodin returned to his original life size plaster in 1899 and exhibited this without any amendments in Belgium and the Netherlands. The same year a life size bronze cast of this plaster was displayed at the Paris Salon. Between 1901 and 1906 the sculptor commissioned Antoine Bourdelle to carve a colossal stone version of Eve, which was later bought by Carl Jacobsen.