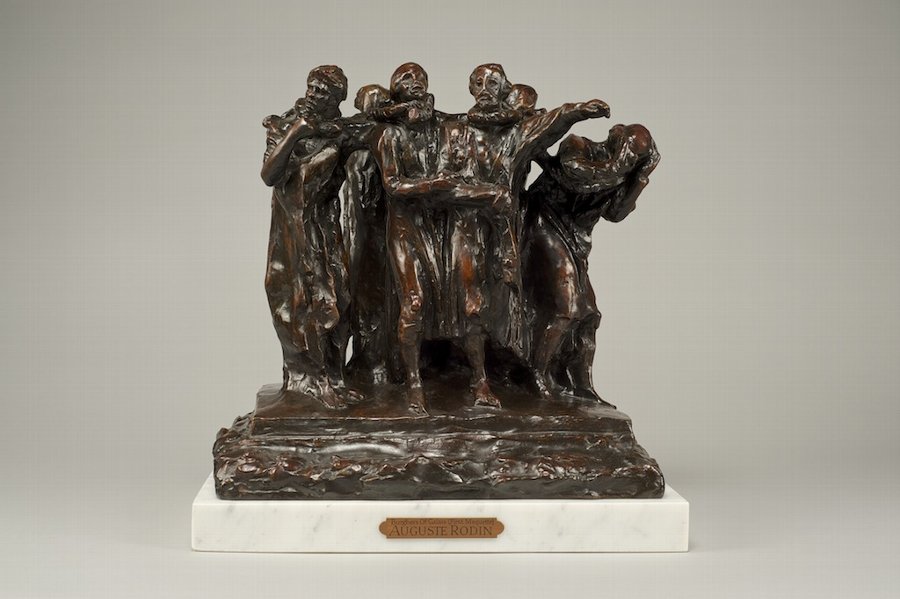 Maquette for the Burghers of Calais
Auguste Rodin
(French, 1840-1917)
Signed A. Rodin
Inscribed E. Godard Fond Paris and Â© by Musée Rodin 1975
Numbered 11
Bronze with a rich dark brown patination
Height: 13" (33 cm)Conceived in 1884. This example cast in 1975
Conceived in 1884, this example was cast in 1975. The model was never cast during Rodin’s lifetime. In total nine casts of this variation without the pedestal were cast for the Musée Rodin between 1971 and 1976 by the Godard foundry.The present work is the first maquette for Rodin’s iconic monument The Burghers of Calais. The monument was conceived as homage to the brave citizens of Calais who sacrificed themselves to the invading English forces during the 100-year war.According to the legend, detailed in Jean Froissart’s Chronicles (1360–65), the King of England Edward III laid siege to Calais during 1346. After 11 months, as starvation gripped the inhabitants of the surrounded city, Edward commanded that they send out six men holding the keys to the city as an acknowledgement of defeat. These men, all of who held high ranking positions, were then to be executed in order to save the other citizens. Although the burghers were eventually spared, after Philippa of Hainault, the Queen of England, asked her husband to pardon them, it was the original heroism of the act that so moved Rodin.Rodin began work on an initial model for the monument in 1884, before the commission was even fully confirmed. Over the next 5 years he reworked the model a number of times, executing the figures both independently and as a full group of 6. The monument, eventually completed in 1889, represented a radical departure from traditional works of this nature. Rodin was particularly concerned with illustrating the humanity of the figures, rather than simply portraying them as exalted heroes. Even in this early study, it is clear that the sculptor has begun to conceive not only the burgher’s relationships with one another, but also the different ways in which they approached what appeared to be their impending doom.‘I did not group them together in a triumphant apophasis: for such a glorification of their heroism would not in any way have corresponded to reality…. With the uncertain outcome of their final inner struggle being waged between their devotion to the city and their fear of dying, it is as if each of them has to face their conscience alone.’The Burghers of Calais, Musée Rodin