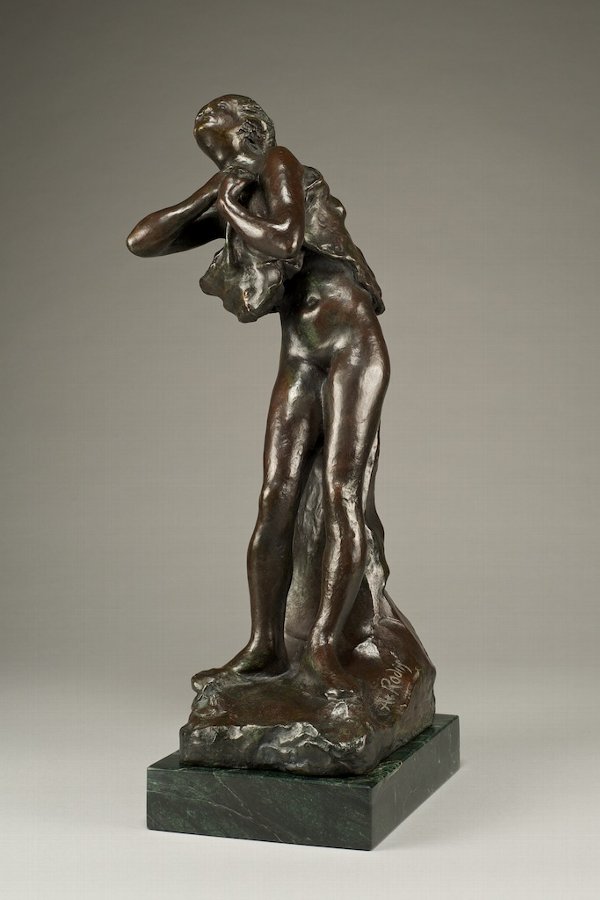 Bather with Sandals
Auguste Rodin
(French, 1840-1917)
Signed A. Rodin with repeat raised interior signature
Inscribed George Rudier Fondeur Paris and Â© by Musée Rodin 1968
Bronze with a rich dark green and brown patination
Height: 16 1/2" (42 cm)Conceived in 1898. This example cast in 1968
Conceived in 1898, the present example was cast in 1968. A single lifetime cast was made by the Griffoul foundry in 1898. In total of twelve casts were made for the Musée Rodin. The first three casts by the Alexis Rudier foundry between 1931 and 1954 and then a further nine casts by the Georges Rudier foundry between 1965 and 1981.In 1898 Rodin sculpted four terracotta female bathers to decorate the niches around the indoor swimming pool at Maurice Fenaille’s villa in Neuilly. A pioneer in the oil industry, Fenaille was also an avid collector and a member of the Académie des Beaux-Arts.After meeting Rodin in 1885, Fenaille became one of the sculptors most supportive patrons and in addition to the four finished works, Rodin also gave Fenaille the study for Bather with a Tripod. The present work is a study for one of the finished terracottas that later adorned the niches around Fenaille’s pool.The four of the large terracottas, now in the collection of the Musée Rodin, form part of a series of bathers that begins with the Zoubaloff Bather. This much earlier work, modelled before 1888, shows a seated female nude, having apparently just emerged from the water.In Baigneuse aux Sandales Rodin captures the bather wearing sandals, drying herself, after swimming. Much like his other bathers, each of which has a different pose, this loosely modelled work not only highlights the soft sensuality of the female form, but also perfectly captures the movement of the model.Zoubaloff Bather, Bronze, Cast before 1888Bust of Madame Fenaille, Circa 1900