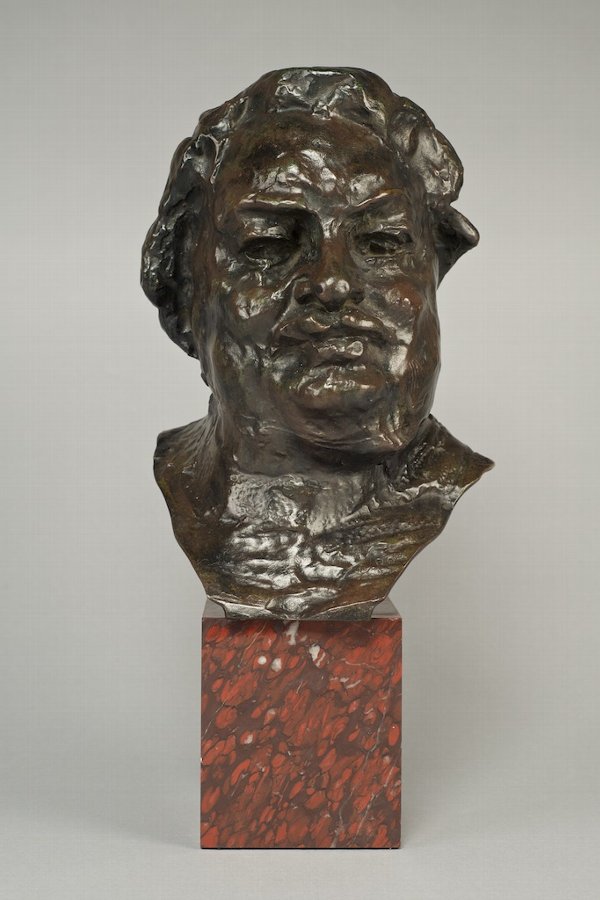 Balzac, étude type c (buste) 3ème version, grand modèle
Auguste Rodin
(French, 1840-1917)
Signed A. Rodin
Inscribed Alexis Rudier Fondeur Paris
Bronze with a dark brown and black patination
Height 10 1/8" (26.2 cm)Conceived in 1892. This example cast between 1918 and 1927The Monument to Balzac was the most controversial sculpture of the 19th century. There were four attempts to raise a subscription to create a monument to the great novelist and playwright; the third attempt was by Emile Zola in 1880 but this did not gather any support until 1883 when the Société des Gens de Lettres opened a subscription for a monument to their former president. The state made a gift of the money and the City of Paris designated a site but there was a further 5 year delay until the sculptor Henri Chapu was chosen for the task. In 1891 Chapu died with the work almost finished. Falguiere, Mercie and Dubois all voted that the work should be executed by a practicien, from the model, but were over ruled by Emile Zola, who was by this time the President of the Society. So finally in July of 1891 in a heavily disgruntled and disputed atmosphere Rodin was given the project.Rodin took to the project with great enthusiasm and made an intensive study of Balzac iconography and literature before producing over fifty different studies of the bust alone. The present model is one such study and is known as the 3rd Version of the Type C study, Large Model.After seven years of working on the model, Rodin exhibited his final study at the Salon of 1898. In a century accustomed to scandals and public outcries the reception of the work was unparalleled in its violence. The work was rejected by the Société des Gens de Lettres, and Rodin withdrew the work from the Salon. The strength of opinion on the work was such that it divided France into pro- and anti Rodin members.The commission was given instead to Jean Joseph Falguiere. Rodin’s Balzac remained at his studio in Meudon until 1930 when it was cast for the Koninklijk Museum in Antwerp. Then finally in 1939 the Société des Gens de Lettres relented and had the work cast and erected on the corner of the Boulevards Raspail and Montparnasse in Paris. It remains one of the most iconic sculptural monuments ever made.