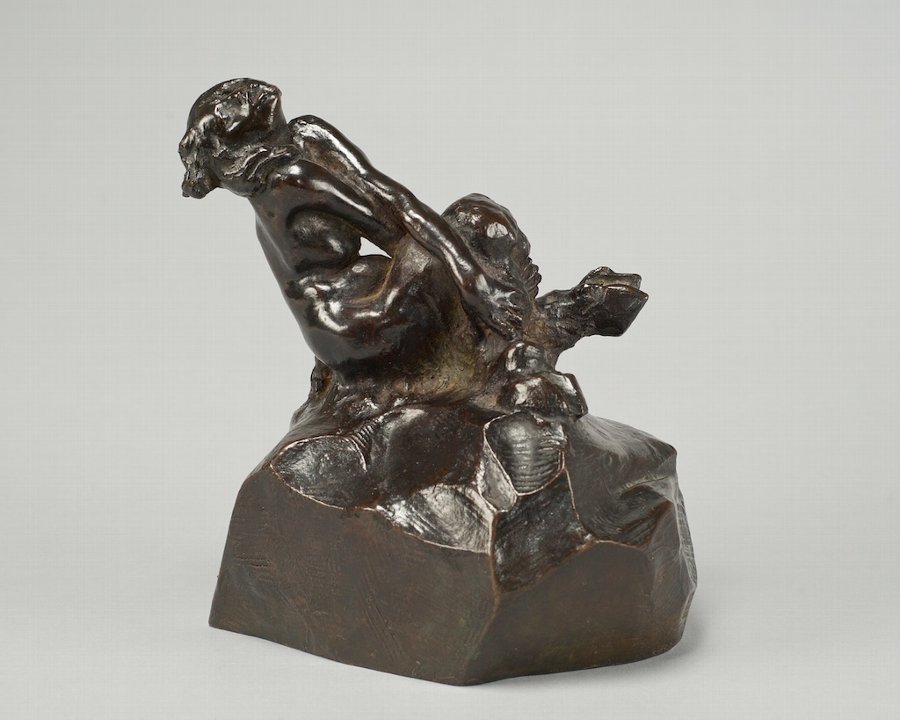 Conceived in 1885. This example cast before 1914. Three other examples were cast in bronze before 1914 by Antoni Roux. Three further casts made by Alexis Rudier foundry between 1928 and 1944.
Conceived in 1885. This example cast before 1914. Three other examples were cast in bronze before 1914 by Anthony Roux. Three further casts by made by the Alexis Rudier foundry between 1928 and 1944.
The figure of the faunesse, or female faun, can be traced back to the mythology of ancient Greece where the creatures were normally depicted as half woman and half goat, as is the case with this particular sculpture.
In ancient mythology, both fauns and faunesses were known for their love of music and wine as well as their lustful nature. Much like the sculptor’s other models depicting Faunesses, here the veiled eroticism of the model and its allusion to female sexuality would not have been lost on his contemporary audience. The composition of this specific work is that of a female bathing figure and combines it with the lower half of a faun – with furred legs and hooves, and therefore much more animalistic than other Rodin’s faunneses, including Standing Faunesse, or Kneeling Faunesse.
The Faunesse Zoubaloff is named after the famed industrialist and collector Jacques Zoubaloff, who purchased the original plaster, and subsequently the bronze from the Antoni Roux sales at the George Petit Galerie in 1914. Rodin had given Roux a number of the plasters on the subject in the 1888’s giving him the right to have them cast. In turn, the Musée Rodin bought back the plaster in Zubladoff’s sale in 1927 – after which they had three further casts made in bronze between 1928 and 1944. Jacques Zoubaloff's collection was one of the most famous in Paris in the day - including works by Barye, Maillol, Rodin, Braque, Dufy, Gris, Laurencin, Matisse, Monet, Picasso, and Renoir, and much of the collection was donated to the Lourve.
Bronze versions of the Faunesse Zoubaloff in the Philadelphia Museum of Art (bequest of Jules E. Mastbaum, 1929); the Kunstinstitut, Frankfurt; and Gezira Center for Modern Art, Cairo.