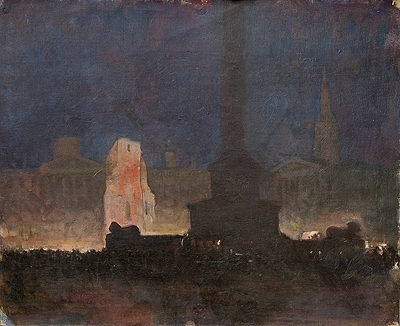 At 11 am on the 11th day of the 11th month the armistice was signed ending 4 years of bloodhed across europea and ending WWI. News of the armistice brought cheering that exceeded that at the beginning of the war. People in England stopped work. Crowds there surged through the streets. Sirens screamed, church bells rang, factories blew their whistles, and those few with cars honked their horns. In Trafalgar Square a vast bonfire of celebration was lit. Pearson lived nearby in Fitzroy square and he worked in Westminster as a civil servant specilizing as an architect for new hospitals for the health service.

Pearson studied at the RA, schools in the early 1890''s. He moved to Holland before WWI and joined an artist colony . He returned to London and started to work as a commercial artist, working for companies such as Doulton, Birds, Collamns and others. His work also appeard in "Womens Pictorial", "The illustrated London News", "Homes and Gardens", "Colour Magzine" often gaining front cover exposure. He exhibited at the Royal Society of British Artists and later he became President of the Langham Sketch Club thus acknowledging his capacity to create highly competent, fluid sketches in a very short time. He developed a reputation as a children''s portrait painter as well as portraits of society women. He contributed to Queen Mary''s famous dolls house.