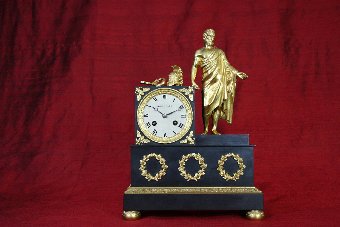 This fine Empire Bronze and Gilded Mantle Clock depicts "Aristides the Just". He was thus named because he was populary reconized as never seeking personal glory or financial gain in his public service to the people of Athens. As a result, during his adult life, Aristides was asked to arbitate difficult private and public issues. He was also a Athenian soldier and statsman. He was one of the 10 commanders in the Battle of Marathon.

THE MOVEMENTThe movement is of 8 day duration, Anchor escapment with silk suspension. Countwheel striking on a bell. Seiral no. 3294. Made and signed by Henry of Paris. Silvered dial and Moon steel blued hands. circa 1805