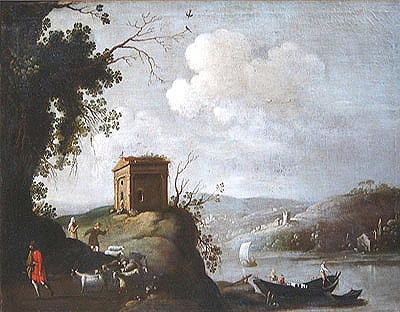 He began his career in Naples (1600-1613) and moved to Rome (1614-1617), where he appears to have encountered and felt influenced by the successful Flemish landscape painters such as Paul Bril, Goffredo Wals, and Adam Elsheimer.In 1617 Cosimo II de? Medici summoned him to Florence, where he worked closely with Jacques Callot. From notebooks, Filippo is known to have made hundreds of sketches of Tuscan landscapes and towns.Starting in 1620 he reproduced in etchings part of his collection of animal skeletons owned by Johann Faber, a Bavarian physician-naturalist residing in Rome and a member of the scientific Accademia dei Lincei. In 1622, Napoletano published twelve etchings of caprices (capprici) and military uniforms (which he signed as signed Teodor Filippo de Liagno).He is described by Baglione as possessing a collection, a ''Wunderkammer of bellisime bizzerrie (beautiful bizarre objects), including among the objects exotic weaponry; fossilized plants; tiger, lion, and turtle skulls; oriental porcelain and sculpted crockery; a vest made of human skin; a harness for dragging whales on ice; a three-legged flea, Persian uniforms, and antiquities such as Roman coins, bronze lamps, and a few statuettes. After Napoletano?s death, bidding for such material was made by collectors such as Cardinal Ippolito Aldobrandini (future Clement VIII) and Cassiano dal Pozzo.