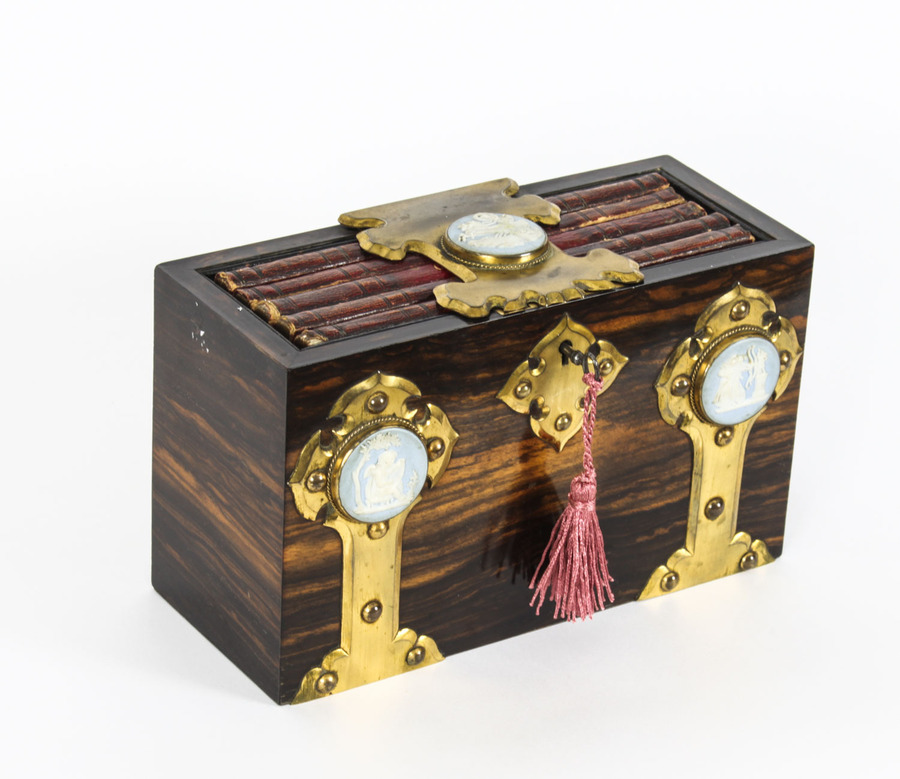 The rectangular box featuresgothic revival brass strap work mounts set with Wedgwood jasper plaques depicting classical figures with a similar hinge which unlocks with a spring mechanism to reveal five gilt morocco bound notebooks titled Personal Expenses, Visits & Addresses, Memoranda, Daily Journal and Cash Account.They miraculously have never been used and all the pages remain blank.There is no mistaking its unique quality and design, which is sure to make it a treasured piece by any discerning collector.Coromandel, also known as Calamander wood, is a highly prized and valuable exotic wood from India and Sri Lanka and was only used in top quality pieces.Complete with working lock and original key.
Condition: In excellent condition having been beautifully cleaned and polished in our workshops, please see photos for confirmation.Dimensions in cm:Height 13 x Width 21 x Depth 9Dimensions in inches:Height 5 inches x Width 8 inches x Depth 3 inches
Our reference: A1826
Betjemann & SonsIn 1812 George Betjemann started apprenticing as a cabinet maker with his uncle, Gilbert Slater at his premises on Carthusian Street, London. In 1834, George then joined his father-in-law, William Merrick's cabinet making business on Red Lion Street, Clerkenwell, London. George brought his sons, George William Betjemann and John Betjemann to apprentice with him from 1848. He began his own business at 6 Upper Ashby Street, Clerkenwell, London, and with his two sons having completed their apprenticeships in 1855, expanded to 7 Upper Ashby Street shortly after.In 1859, George moved into 36 Pentonville Road, London where he continued his business, now called George Betjemann & Sons, alongside his two sons. George William never married but instead was ‘married' to his work, being a true artist and perfectionist. Their work was on display at the International Exhibition of 1862, and the International Exposition of 1867 in Paris. They took the art of cabinet, box and book slide making to new heights. They specialised in designs for operating the way that different compartments in vanity boxes opened and also the sprung system for book slides.By 1871, they had expanded their residence to incorporate 38 Pentonville Road and were employing 119 people. Records show that by 1875 a further incorporation of 40 Pentonville Road was undertaken. George died in 1886 at the age of 88 and George William and John ran George Betjemann & Sons in partnership until John's death in 1893. George William then established a business partnership with John's sons, John George Betjemann and Ernest Edward Betjemann. Around 1896, John George and Ernest Edward established an offshoot company called Betjemann Brothers, based at 2 Newcastle Place, Clerkenwell, London. This company ran alongside George Betjemann & Sons until they were merged in 1903, following the death of George William. In 1909, they became a limited company, known as George Betjemann & Sons Ltd.With Ernest's son John (the future poet Sir John Betjeman) having no interest in carrying on the family business, George Betjemann & Sons Ltd finally wound up in 1939.
Coromandelwoodor Calamanderwood
is a valuable wood fromIndia,Sri Lankaand South East Asia. It is of a hazel-brown color, with black stripes (or the other way about), very heavy and hard. It is also known asMacassarEbonyorvariegated ebonyand is closely related to genuineebony, but is obtained from different species in the same genus; one of these isDiospyrosquaesitaThwaites, from Sri Lanka. The nameCalamandercomes from the localsinhalesename, 'kalu-medhiriya', which means dark chamber; referring to the characteristic ebony black wood.Coromandelwood has been logged to extinction over the last 2 to 3 hundred years and is no longer available for new work in any quantity. Furniture incoromandelis so expensive and so well looked after that even recycling it is an unlikely source. A substitute,MacassarEbony, has similar characteristics and to the untrained eye is nearly the same but it lacks the depth ofcolourseen in genuineCoromandel.