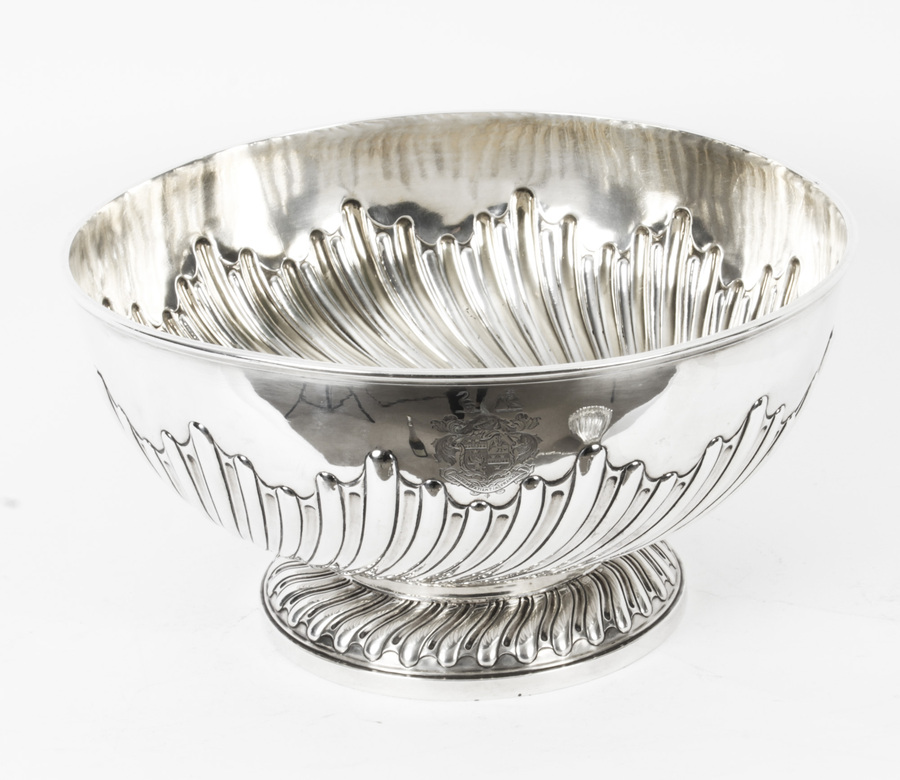 This is a large gorgeous antique Victorian sterling silver punch bowl bearing the makers mark of the renowned silversmith Walter Barnard with hallmarks forLondon 1892 and retailed by Gibson & Co, Belfast.

This exquisite punch bowl is also ideal as a champagne cooler and it has beautiful and incredibly detailed embossed half fluted decoration and is raised on a pedestal foot.It bears a fabulous heraldic crest for the Sharman-Crawford family with the latin motto "Durum Patientia Frango" which translates to "By patience I break what is hard"
The SHARMAN-CRAWFORD combined Coat of ArmsBorn at Moira Castle, at the age of 25 on 5 December 1805, as William SHARMAN, he married at Bangor, Mabel Fridiswid CRAWFORD and had with her eleven children. They lived together at Crawford House, Crawford's Burn, Co. Down, Northern Ireland.Just before his death in 1827, William's brother-in-law Arthur Crawfordin a pact with his father, agreed to break the entail on the estate in favour of his sister Mabel Fridiswid CRAWFORD, and William SHARMAN was authorised, by Royal Licence to assume the surname of CRAWFORD in addition to, and after SHARMAN, and to bear the arms of Crawford quarterly with those of Sharman, thus beginning the SHARMAN-CRAWFORD line.
This is truly a special item and it will attract the maximum amount of attention, the quality and craftsmanship are undeniable.
Condition:In excellent condition with clear hallmarks and no dings, dents or signs of repair. Please see photos for confirmation.Dimensions in cm:Height 19 x Width 35 x Depth 35Dimensions in inches:Height 7 inches x Width 1 foot, 2 inches x Depth 1 foot, 2 inches
Our reference: A2521
Walter Barnard (1868 - 1903) was part of possibly the oldest manufacturing silversmith in the world, the origin of this business having been established by Anthony Nelme c. 1680. Francis Nelme inherited the business on the death of his father in 1722 and continued until 1739 when Thomas Whipham took over the business. On his death in 1756, his son Thomas Whipham Jr. took into partnership Charles Wright. Thomas retired in 1775 and the business was continued by Charles Wright. The business was amalgamated by Henry Chawner in 1786 and the latter son of Edward Barnard (I) became the foreman of the firm. Chawner was master to the first Edward Barnard (I) so that the connection of the Barnard family can be traced from 1773. In 1796, he took into partnership John Emes that became the owner after the retirement of Chawner, maintaining Edward Barnard (I) as manager. Emes died in 1808 and his widow Rebecca took as partner Edward Barnard (I). Rebecca Emes withdrew in 1829 and Edward Barnard (I) became the proprietor with his son Edward Barnard (II), John Barnard and William Barnard, trading under the style Edward Barnard & Sons. After the retirement of Edward Barnard (I) the firm was continued by Edward Barnard (II) (1846 - 1851), John Barnard (I) (1846 - 1868), William Barnard (1846), Edward Barnard (III) (1868), Walter Barnard (1868 - 1903), John Barnard (II) (1868 - 1903), Michael Barnard (1896 - 1903), Stanley Barnard (1896 - 1903) and Robert Dubcock (1896). The firm was converted into a limited liability company in 1910 under the style Edward Barnard & Sons Ltd. In 1977, Edward Barnard & Sons Limited became a subsidiary of Padgett & Braham Ltd.