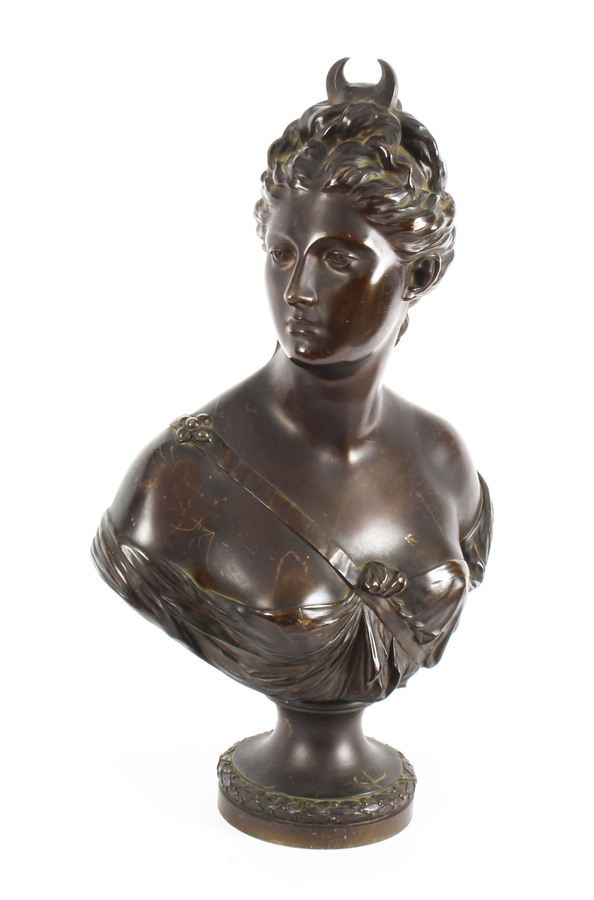 A beautifully sculpted patinated bronze bust of the Roman goddessDiana, after Jean Antoine Houdon (1740-1828), and dating from Circa 1880.

The finely sculpted depiction of Diana wearing a classical flowing gown with an interesting crown on her head, is raised on a brass revolving socle base so that it can be viewed from all angles.It bears the replica signature of Jean Houdon on the rear, and the foundry mark of the renowned Susse Freres Foundry in Paris, with the letter D..
Add this very fine example of Diana to your collection.
Condition:In excellent condition, please see photos for confirmation.Dimensions in cm:Height 61 x Width 36 x Depth 20Dimensions in inches:Height 2 foot x Width 1 foot, 2 inches x Depth 8 inches
Our reference: A1494
Susse Freres Foundry
started casting bronze in 1839 under the direction of Michel Victor Susse and Amedee Susse who were brothers. The foundry published a six page catalogue of sculpture in that year. They produced ornaments for furniture and clocks as well as statues. In 1847 They obtained the permission to use the Sauvage procedure of reduction which was similar to the one invented by Achille Collas, cofounder of the Barbedienne foundry. In the years following Susse Freres contracted with several French sculptors including Jacquemart, Duret, and Moigniez to produce their editions.Michel Victor Susse died in 1860 leaving Amedee as the sole director of the foundry until 1880 when Albert Susse became the director. The Susse Freres foundry purchased the models of Pierre Jules Mene and Auguste Cain in 1895 after Cain's death and also contracted with Pierre Nicholas Tourgeneff to produce his editions.At the turn of the century Susse Freres opened a large new retail shop at 13 Boulevard de Madeleine to sell their items which had expanded to include inkwells, candelabras and clocks, as well as sculptures. The company continued to be run after Albert Susse's death by his son Jacques Susse and then by Albert's grandson Andre Susse. Andre Susse died in 1961 and his widow continues to run the business using both the sand cast and lost wax method of foundry casting until the mid 1970's.
Diana
was the Roman name for the Grecian goddess Artemis. She is often represented as a huntress with bow and quiver on her shoulder and dog or deer at her side. The Greeks worshiped Artemis as the goddess of chastity and the guardian of youths and maidens. She also came to be looked upon as the moon-goddess, just as her twin brother Apollo was viewed as the sun-god. Probably the finest representation of her handsome features was in this statue which was found in the villa of the EmperorHadrianat Tivoli near Rome. it is now in the museum of the Louvre.