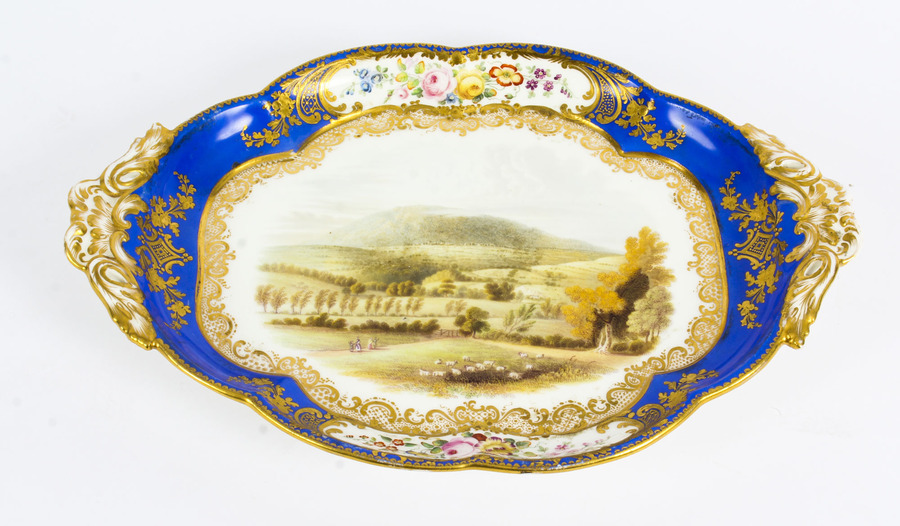 This is a fine and unique antique Royal Worcester porcelain landscape dish, circa 1840 in date.

The Worcester Royal Blue oval shaped dish is beautifully painted with a view of The Wrekin in Shropshire in the centre and framed with a royal blue rim which features two cartouches of summer flowers with gilt highlights.
Add this beautiful dish to your collection with this rare and unique piece.
Condition:In excellent condition with no chips, cracks or signs of repair, please see photos for confirmation of condition.Dimensions in cm:Height 5 x Width 32 x Depth 22Dimensions in inches:Height 2 inches x Width 1 foot, 1 inch x Depth 9 inches
Our reference: 09394
Royal Worcesteris believed to be the oldest and second oldest remaining Englishporcelainbrand still in existence today (disputed byRoyal Crown Derby1750 year of establishment).
It all started with Dr John Wall, a physician, and William Davis, anapothecary, who developed a unique method for producing porcelain and, in 1751, persuaded a group of 13 businessmen to invest in a new factory at Warmstry House,Worcester, England, on the banks of theRiver Severn. Dr Wall secured the sum of £4500 from the partners to establish the factory, known then as "The Worcester Tonquin Manufactory"; the original partnership deeds are still housed in the Museum of Worcester Porcelain.In 1783, the factory was purchased by Thomas Flight—the former London sales agent for the concern—for £3,000. He let his two sons run the concern, with John Flight taking the lead role till his death in 1791. In 1788George III, following a visit to the company, granted it aroyal warrant, and it became known as the "Royal Porcelain Works".Knowledge of this period is largely a result of the excellent diary that John Flight kept from 1785–1791. This is discussed in detail in Appendix III ofFlight & Barr Worcester PorcelainbyHenry Sandon.
During this period, the factory was in poor repair. Production was limited to low-end patterns of mostly Blue and White porcelains afterChinese porcelaindesigns of the period. It was also pressured by competition from inexpensive Chinese export porcelains, and from Thomas Turner's Caughley (pronounced "Calf-ley") Factory.
Martin Barr joined the firm as a partner in 1792; porcelains of this period are often identified by an incised capital "B" and, later, by more elaborate printed and impressed marks.Thomas Flight died in 1800, leaving the factory in the hands of his son Joseph Flight and Martin Barr. Barr's sons Martin Barr Jr. and George Barr were being prepared at that time to run the factory.
In addition to the warrant granted by George III, Royal Warrants were also issued by thePrince of Wales, in 1807,and thePrincess of Wales, in 1808.The factory's former site includes the independentMuseum of Royal Worcester(formerly known as theDyson Perrins Museum'and 'Worcester Porcelain Museum') owned by the Dyson Perrins Museum Trust.The Museum houses the world's largest collection of Worcester porcelain. The collections date back to 1751 and theVictoriangallery, the ceramic collections, archives and records of factory production, form the primary resource for the study of Worcester porcelain and its history.After the 1976mergerwithSpodeand due to heavy competition from overseas, the production was switched to factories in Stoke and abroad. 100 staff were made redundant in 2003 and another 100 went in 2005. Fifteen porcelain painters left the Severn Street factory on Friday 29 September 2006, together with 100 other workers.The last trading date for Royal Worcester was 14 June 2009.
The company went into administration on 6 November 2008 and on 23 April 2009 the brand name and intellectual property were acquired byPortmeirion PotteryGroup – a pottery and homewares company based inStoke-on-Trent. As Portmeirion Group has a factory in Stoke-on-Trent, the purchase did not include Royal Worcester andSpodemanufacturing facilities.