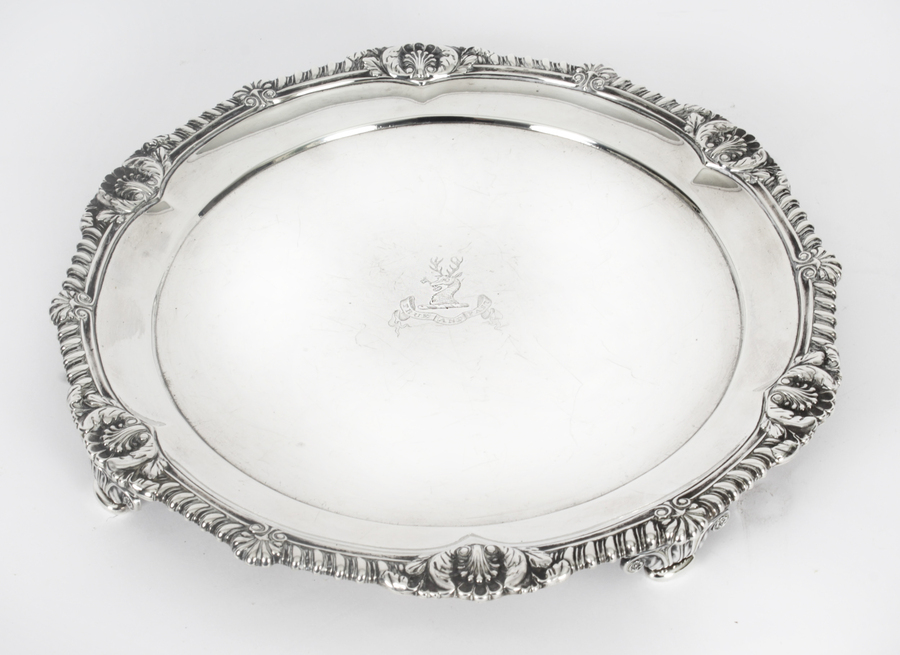 It has clear hallmarks for London 1811 and the makers mark of Paul Storr.It is typical of his work with the raised gadrooned rim with anthemion on shells and with anthemion at intervals, on four fabulous foliate bracket feet. The salver is engraved with a crest and motto and the underside is later engraved
Charlotte J. Parke from C. J. Parke, March 1893'The centre is engraved with a crest above amotto 'True and Fast' and I have researched this crest:The Crest of ParkeThe crest as engraved upon this George III English Sterling Silver Footed Salver by Paul Storr hallmarked London 1811 is that of the family of Parke. It may be blazoned as follows:Crest: A stag's head couped sable holding in the mouth a key orMotto: True and fastThe family of Parke originally hailed from the County of Cumberland in the northeast of England1 later settling in the County of Dorset at Henbury House, Sturminster Marshal, near Wimborne. Given the evidence of the inscription found on the underside of the salver ‘Charlotte J. Parke from C. J. Parke, March 1893' it was undoubtedly at one time in the possession of Charles Joseph Parke (died 9th March 1893) of Henbury House aforesaid and gifted to Charlotte Josephine Parke (baptised 4th January 1857 died 2nd January 1941) his third daughter by his wife, Ellen Mary Ethelston. I would venture the following hypothesis that the salver was bequeathed to Charlotte in her father's will that was granted probate at London on the 20th May 1893. The ‘March 1893' of the inscription acts as a remembrance of the month of the death of her father. It wasnoted that Charlotte's father left an estate worth some £66,892, 19 shillings and one pence, a very considerable sum in the last decade of the 19th Century and even thereafter. Charlotte never married and was living at the time of her death at The Coppice, Sixpenny Handley in the County of Dorset. Her will was proved for probate at Llandudno on the 25th March 1941. She left an estate worth £18,866, 10 shillings and 4 pence. Again, a comfortable sum in 1941.See the photo ofHenbury House, Sturminster Marshal, near Wimborne, Co. Dorset. The former seat of the Parke family. The house was destroyed by fire, the remains of which were demolished in the 1990's.There is no mistaking its unique quality and design, which is sure to make it a treasured piece by any discerning collector.Condition:In excellent condition with clear hallmarks and no dings, dents or signs of repair. Please see photos for confirmation. Dimensions in cm:Height 2 x Width 26.5 x Depth 26.5Weight 0.69 kgDimensions in inches:Height 1 inch x Width 10 inches x Depth 10 inchesWeight 1.5 lbs
Our reference: A2383a
PaulStorr
born in London England in 1771, was to become one of the most talented silversmiths of the nineteenth century. Today his legacy of exceptionally well crafted silver, found worldwide in museums and private collections, leaves one in awe when compared to that of his contemporaries.After having served a seven year apprenticeship from the age of 14, he began his career in 1792 when he went into a brief partnership with William Frisbee. This did not last and in 1793 a new mark, (his initials ‘P S') was entered. By the beginning of the nineteenth century he had established himself as one of London's top silversmiths producing, amongst others, commissions for Royalty.In 1801 he married Elizabeth Susanna Beyer with whom he was to have ten children. In 1807 PaulStorrentered into a working relationship with PhilipRundelland by 1811 was a partner, and managing the workshops forRundell, Bridge &Rundell.During this period he kept his own marks and separate workshop. However it was throughRundell, Bridge &Rundellwho were appointed Goldsmith in Ordinary to George III in 1804 that his reputation as a master silversmith grew. His talents lay in being able to transform ideas and designs fromRundell, Bridge &Rundell'sdesigners, WilliamTheedII, the chiefmodellerand head of the design department, and later JohnFlaxmanII who succeeded him in 1817. During this periodRundell, Bridge &Rundell'sreputation grew due to the patronage of the Prince Regent (later George IV).