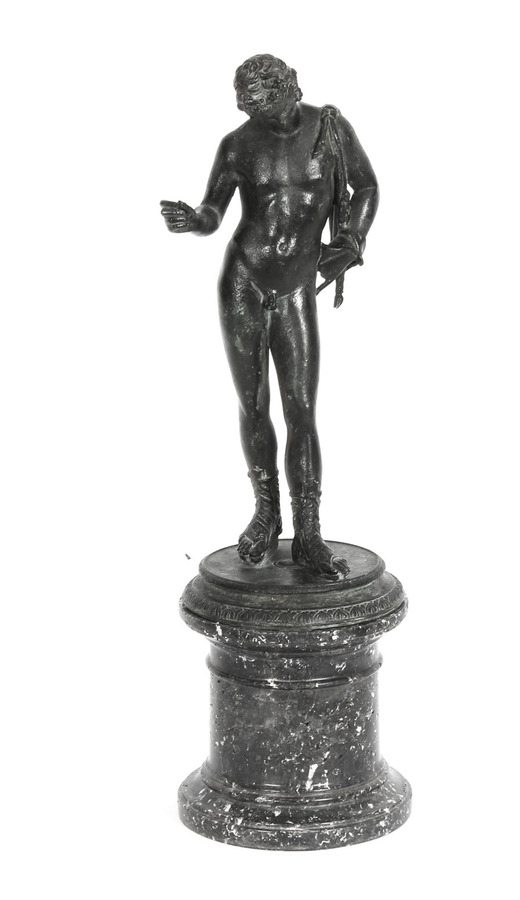 This is a superb antique Grand Tour patinated bronze figure of Narcissus, dating from the last quarter of the 19th Century.

Narcissus was a hunter in Greek mythology and hewas distinguished for his beauty.
This stunning patinated bronze classical figure is after the original antique bronze which was found in Pompeii in 1862. It features Narcissus standing tall with his head slightly looking downward and is mounted on a marble turned plinth base.
This high-quality hot cast solid bronze was produced by using the traditional "lost wax" process, otherwise known as the "cire perdue" method.The craftsmanship is second to none throughout all aspects of this bronze which is sure to add an unparalleled touch of class to your home.Condition:In excellent condition, please see photos for confirmation.Dimensions in cm:Height 53 x Width 18 x Depth 18Dimensions in inches:Height 1 foot, 9 inches x Width 7 inches x Depth 7 inches
Our reference: 09438
Narcissus was a hunter in Greek mythology, son of the river god Cephissus and the nymph Liriope. He was a very beautiful young man, and many fell in love with him. However, he only showed them disdain and contempt. One day, while he was hunting in the woods, the Oread nymph Echo spotted him and immediately fell for him. When Narcissus sensed that someone was following him, Echo eventually revealed herself and tried to hug him. However, he pushed her off and told her not to disturb him. Echo, in despair, roamed around the woods for the rest of her life, and wilted away until all it remained of her was an echo sound.Nemesis, the goddess of retribution and revenge, learned what had happened and decided to punish Narcissus for his behaviour. She led him to a pool; there, the man saw his reflection in the water and fell in love with it. Although he did not realise in the beginning that it was just a reflection, when he understood it, he fell in despair that his love could not materialise and committed suicide.The Grand Tour was the traditional trip of Europe undertaken by mainly upper-class European young men of means. The custom flourished from about 1660 until the advent of large-scale rail transit in the 1840s, and was associated with a standard itinerary.It served as an educational rite of passage. Though primarily associated with the British nobility and wealthy landed gentry, similar trips were made by wealthy young men of Protestant Northern European nations on the Continent, and from the second half of the 18th century some South American, U.S., and other overseas youth joined in. The tradition was extended to include more of the middle class after rail and steamship travel made the journey less of a burden.The primary value of the Grand Tour, it was believed, lay in the exposure both to the cultural legacy ofclassical antiquityand theRenaissance, and to the aristocratic and fashionably polite society of theEuropeancontinent. In addition, it provided the only opportunity to view specific works of art, and possibly the only chance to hear certain music. A grand tour could last from several months to several years. It was commonly undertaken in the company of a knowledgeableguideortutor.The Grand Tour not only provided aliberal educationbut allowed those who could afford it the opportunity to buy things otherwise unavailable at home, and it thus increased participants' prestige and standing. Grand Tourists would return with crates of art, books, pictures, sculpture, and items of culture, which would be displayed in libraries,cabinets, gardens, anddrawing rooms, as well as the galleries built purposely for their display; The Grand Tour became a symbol of wealth and freedom.Lost Wax Method
sometimes called by the French name of cire perdue or the Latin, cera perduta is the process by which a bronze or brass is cast from an artists sculpture.In industrial uses, the modern process is called investment casting. An ancient practice, the process today varies from foundry to foundry, but the steps which are usually used in casting small bronze sculptures in a modern bronze foundry are generally quite standardised.