an ancient fortified meditteranean harbour with fisherfolk in the foreground an 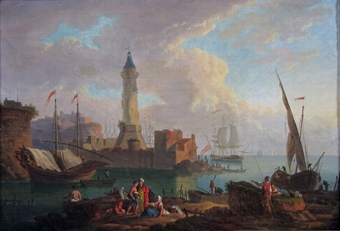 Lacroix de Marseille enjoyed great popularity with both Italian and French clients, yet surprisingly, little is known about his life. He is thought to have been born in Marseilles circa 1700 and a pair of Italian seaports exhibited at the Heim Gallery in Paris in 1956 are said to be signed and dated 1743. Otherwise nothing is known of his first fifty years. The first documentary reference to the artist dates from 1750 when the marquis de Vandi?res, travelling with Soufflot and Cochin, met Lacroix in Rome. Indeed his Seaport, now in the Toledo Museum of Art, Ohio and included in the exhibition, France in the Eighteenth Century (London, Royal Academy, 6 January 1968-3 March 1969, no. 358) is signed and dated ?Grenier. De La.Crois, fecit Rom 1750?. From the clear stylistic links between the two artists it has been assumed that Lacroix was a pupil of Claude-Joseph Vernet and they were evidently working side by side in Rome in 1751 when Lacroix executed four copies, now at Uppark, Sussex, of four works by Vernet painted in that year, also at Uppark. Lacroix?s copies are almost indistinguishable from Vernet?s prototypes, which may help to explain why he only emerges from obscurity after his and Vernet?s paths separated in 1753, Vernet returning to France leaving Lacroix in Rome. Lacroix was in Naples in 1757 and may have spent a number of years there, although he was clearly back in Rome in 1759, as the inscription on the Colnaghi picture shows. He later returned to France, where he is recorded in 1776 and 1780. He died in 1782, in Berlin according to Pahin de la Blancherie.