a young girl with her dog in a interior 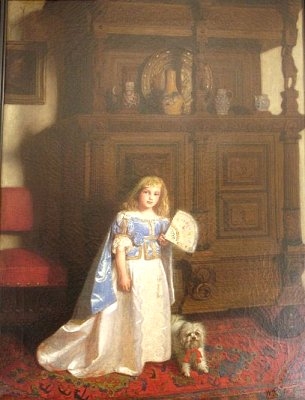 Born and raised in Dundee, William Baxter Collier Fyfe trained at the Royal Scottiish Academy and later, in the second half of the 1850s, in Paris. His reputation as a painter of historical subjects was established by the the painting "The Abdication of Mary Queen of Scots", which was much admired and talked about when it appeared at the exhibition of the Royal Scottiish Academy in 1861. On this occasion, the Art Journal described The Abdication of Mary Queen of Scots as `one of the most ambitious paintings in the rooms ... by Mr Fyfe - a name new to us.'' The reviewer seems to have known that the painting had been the result of a commission, and regarded this as a professional benefit which should offer `encouragement for others to leave their ``bits'' and betake themselves to pictures.'' (Art Journal, 1861, p.86)

Fyfe was to become a regular contributor to the Royal Scottish Academy exhibitions, although never elected as a member of that institution. He also sent to the London Royal Academy, and seems to have maintained a studio in London. After his death, a memorial exhibition was held at the McManus Gallery in Dundee. W.B.C. Fyfe was a close friend of John Faed.