Antique A large pair of portraits of a ship's captain and his wife | ANTIQUES.CO.UK | 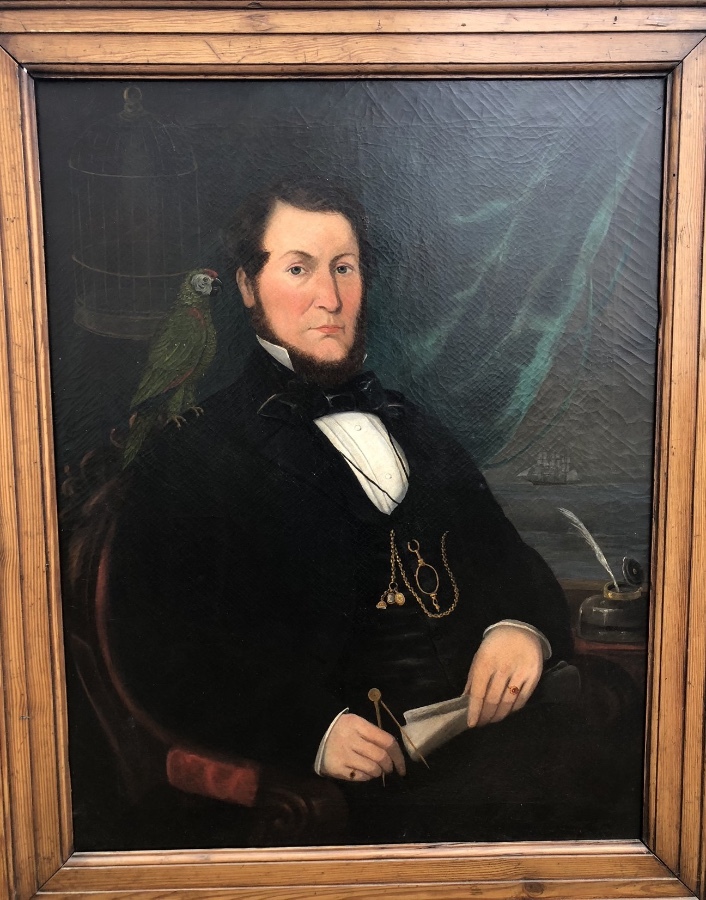 Rob Hall Antiques has 9 antiques for sale.
click here to see them all

Over the years we have sold a good number of portraits of 18th and 19th century ship's captains, often with the ship in the background. Occasionally we have found these in pairs, where the captain's wife has stayed together with her husband over the years. But we have never found one where the wife has a ship in the background, aswell as her husband, as a sign of his trade. Nor have we ever seen a ship's captain's portrait where he has a parrot on his shoulder making this a truly rare pair of portraits. These are a large and impressive pair of portraits.

The captain holds a compass and charts in his hands, and inkwell and quill sits in the background. To the subject's left is a cage, and its occupant, a green parrot, sits on the captain's shoulder. He probably acquired the bird on on his sea voyages. His ship is depicted in the background.The captain's wife sits with her cat her knee, her husband's ship in the background, with lace in her left hand.Pine frames. Not relined. Canvas supplied by Lechertier Barbe & Co in Regent Quadrant, later Regent Street, dating the typically mid 19th century portraits to post 1859, when they added the '& co' to the company name.Measuring (frame) 96 cm x 114 cm (canvas) 90 cm x 110cmc. 1860

Rob Hall Antiques has 9 antiques for sale.
click here to see them all