a an orientalist battle scene 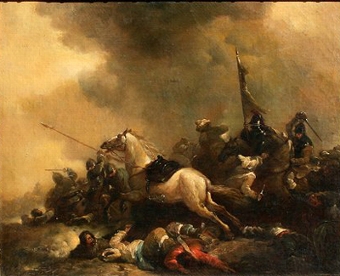 Italian painter. His date of birth is recorded in the register of the baptistery at Parma (no. 246), so correcting that (1689) given in all the earliest sources. He trained under Pier Ilario Spolverini (1657-1734) in his home town and became a successful painter of battle scenes. It is probable that the young painter soon moved to Florence, where he studied the paintings of Jacques Courtois and copied 24 of his battle scenes. Later it is said that Simonini visited Rome. He certainly worked in Bologna, where he was documented as the ''painter of the most eminent Cardinal Ruffo, Papal ambassador in Bologna'', a post the Cardinal held from August 1721 to August 1727.