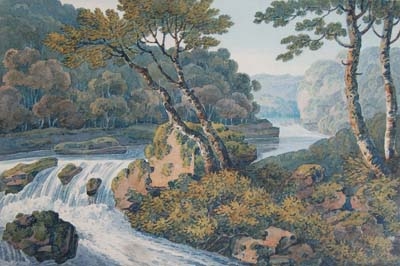 The River Torridge is a river in Devon in England. It was the home of Tarka the Otter in Henry Williamson''s book. The Torridge local government district is named after the river.
The river rises close to the border with Cornwall (north of the source of the River Tamar. It flows generally east, passing between East Putford and West Putford, and near Bradford it is joined by the River Waldon, then heads east past Black Torrington and Sheepwash. It is joined by the River Lew near Hatherleigh, and then by the River Okement near Meeth.
It then flows northwards, picking up the River Mere south of Beaford. After this it makes tight bends, and goes past Little Torrington and Great Torrington heading generally north-west. It is joined by the River Yeo at Pillmouth, and then becomes estuarine by Bideford. Between Appledore and Instow it joins the estuary of the River Taw.
The Tarka Trail walking and cycle route partly follows the course of the North Devon Railway, which, for a considerable distance, closely followed the line of the river. Around Bideford the railway crossed from one bank to the other, and the Trail provides a good vantage point for viewing the river.