a troubadour resting with his capuchin monkey, 19th century 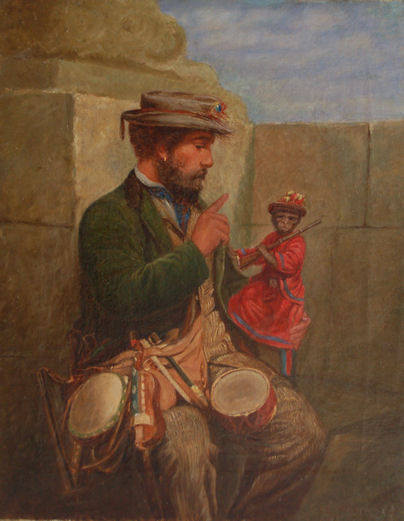 There have been performances in public places for gratuities in every major culture in the world, dating back to antiquity. This art form was the most common means of employment for entertainers before the advent of recording and personal electronics. Prior to that, a person had to produce any music or entertainment, save for a few mechanical devices such as the barrel organ, the music box, and the piano roll. Organ grinders were commonly found busking in the old days. The term "busking" was first noted in the English language around the middle 1860s in Great Britain. Up until the 20th century buskers were commonly called minstrels in America, Europe and other English-speaking lands.
The word "busk" comes from the Spanish root word "buscar", meaning "to seek" ? buskers are literally seeking fame and fortune. Busking is common among some Gypsies, also known as the Romani people. Romantic mention of Gypsy music, dancers and fortune tellers are found in all forms of song poetry, prose and lore. The Roma brought the word busking to England by way of their travels along the Mediterranean coast to Spain and the Atlantic ocean and then up north to England and the rest of Europe. In medieval France buskers were known by the terms troubadours and jongleurs. In northern France they were known as trouveres. In old German buskers were known as Minnesingers and Spielleute. In obsolete French it evolved to busquer for "seek, prowl" and was generally used to describe prostitutes. In Italian it evolved to buscare which meant "procure, gain" and in Italy buskers are called buscarsi or, more simply, Buskers (see loan word). In Russia buskers are called skomorokh and their first recorded history appears around the 11th century.Mariachis are Mexican street bands that play a specific style of music by the same name.] Mariachis frequently wear ornate costumes with intricate embroidery and beaded designs, large brimmed sombreros and the short charro jackets. Mariachi groups busk when they perform while traveling through streets and plazas, as well as in restaurants and bars.Around the middle 19th century Japanese Chindonya started to be seen using their skills for advertising, and these street performers are still occasionally seen in Japan.In the US, medicine shows proliferated in the 19th century. They were traveling vendors selling elixirs and potions to improve the health. They would often employ entertainment acts as a way of making the clients feel better. The people would often associate this feeling of well-being with the products sold. After these performances they would "pass the hat".

Easily recognized as the "organ grinder" or "greyhound jockey" monkeys, capuchins are sometimes kept as exotic pets. Sometimes they plunder fields and crops and are seen as troublesome by nearby human populations. In some regions they have become rare due to the destruction of their habitat. They are also used as service animals, sometimes being called "nature''s butlers". Some organizations have been training capuchin monkeys to assist quadriplegics as monkey helpers in a manner similar to mobility assistance dogs. After being socialized in a human home as infants, the monkeys undergo extensive training before being placed with a quadriplegic. Around the house, the monkeys help out by doing tasks including microwaving food, washing the quadriplegic''s face, and opening drink bottles. Capuchin monkeys are featured in the movies Pirates of the Caribbean: The Curse of the Black Pearl (and its sequels), The New Adventures of Pippi Longstocking (and its sequels), Night at the Museum (and its sequel), Anacondas: The Hunt for the Blood Orchid, Ace Ventura When Nature Calls, and Monkey Shines. Ross Gellar(David Schwimmer) on the NBC sitcom Friends had a capuchin monkey named Marcel.