a stag hunt by moonlight 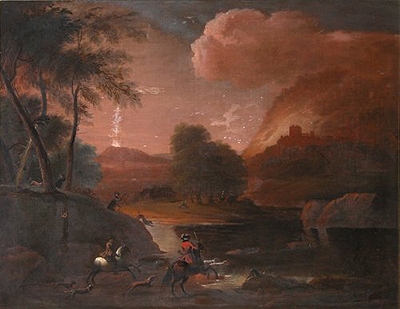 Born in France, by his twenties Loutherbourg was a successful and prolific land and seascape painter. In 1766 he was elected to the French Royal Academy. Five years later he settled in England where he also worked at the Drury Lane Theatre, designing stage sets for David Garrick. He was elected to the Royal Academy in 1781 and in 1805 published The Romantic and Picturesque Scenery of England and Wales.

Philip James de Loutherbourg, also seen as Philippe-Jacques and Philipp Jakob and with the appellation the Younger (31 October 1740 ? 11 March 1812) was an English artist of French origin.He was born in Strasbourg, where his father, the representative of a Polish family, practised miniature painting; but he spent the greater part of his life in London, where he was naturalized, and exerted a considerable influence on the scenery of the English stage, as well as on the artists of the following generation. De Loutherbourg was intended for the Lutheran ministry, and was educated at the University of Strasbourg.As the calling, however, was foreign to his nature, he insisted on being a painter, and placed himself under Charles-Andr? van Loo in Paris. The result was an immediate and precocious development of his powers, and he became a figure in the fashionable society of that day. In 1767 he was elected into the French Academy below the age required by the law of the institution, and painted landscapes, sea storms, battles, all of which had a celebrity above those of the specialists then working in Paris. His debut was made by the exhibition of twelve pictures, including Storm at Sunset, Night, Morning after Rain.He was made a member of the Royal Academy, in addition to other distinctions, in 1781, shortly after which date we find an entirely new mental impulse taking possession of him. He joined Balsarno, comte de Cagliostro, and travelled about with this extraordinary person leaving him, however, before his condemnation to death. We do not hear that Mesmer had attracted De Loutherbourg, nor do we find an exact record of his connection with Cagliostro. A pamphlet published in 1789, A List of a few Cures performed by Mr and Mrs De Loutherbourg without Medicine, shows that he had taken up faith healing, and there is a story that a successful projection of the philosopher''s stone was only spoiled by the breaking of the crucible by a relative. He died in 1812.Loutherbourg invented the Eidophusikon - a way of presenting ?images of nature? on stage, using lights and transparent gauzes to simulate different weather conditions and times of day.