Antique A Punch and Judy Show at a coastal village | ANTIQUES.CO.UK |

a punch and judy show at a coastal village 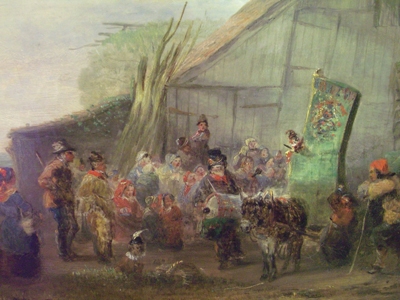 The tale of Punch and Judy varies from puppeteer to puppeteer and has changed over time, but the outline of early 19th-century shows is usually still recognizable. It typically involves Punch behaving outrageously, struggling with his wife Judy and the Baby, and then triumphing in a series of encounters with the forces of law and order (and often the supernatural). The classic ending of the show has him upending the Devil himself, exclaiming "Huzzah huzzah, I''ve killed the Devil!".