a pastoral scene with travellers at a water trough 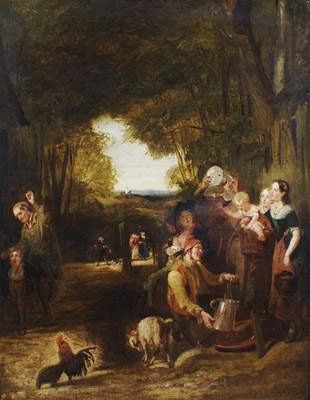 Knight, John Prescott 1803-1881, portrait-painter, son of Edward Knight [q.v.] the comedian, was born at Stafford in 1803. He began life in the office of a West India merchant in Mark Lane, London, who soon afterwards failed. He then took to drawing, according to his own statement, out of sheer idleness, and after a time his father, who had artistic tastes, consented to place him for six months with Henry Sass to correct his drawing, and for another six months with George Clint to improve his colouring. In 1823 he became a student of the Royal Academy, and in 1824 he contributed to its exhibition portraits of his father and of Alfred Bunn [q.v.], the manager of Drury Lane Theatre. The death of his father in 1826 left him early to depend on his own exertions, and for some time he continued to paint theatrical portraits, although sometimes producing pictures of a more fanciful character. His first appearance at the British Institution was in 1828, when he sent ?The Whist Party? and ?List, ye landsmen all, to me!? These were followed in 1829 by ?Auld Robin Gray;? in 1830 by ?Smugglers alarmed;? in 1831 by ?The Auld Friends? and ?The Pedlar;? in 1832 by ?A Bit of Courtship? and another ?Auld Robin Gray;? in 1833 by ?The Spanish Refugees? and ?John Anderson, my Jo,? and in 1834 by ?Sunset.? In 1835 he exhibited at the Royal Academy ?Tam o'' Shanter,? in 1836 ?The Wreckers,? in 1837 ?The English Harvest,? in 1838 ?The Saint''s Day,? engraved by William Chevalier for the Art Union of London, and in 1839 ?The Broken Heart.? Having been elected an associate of the Royal Academy in 1836, he was in 1839 appointed to the professorship of perspective, which he held until 1860, to the great advantage of the students. About 1840 he resumed portrait-painting and obtained much success, especially with his male sitters. The ?Heroes of Waterloo,? better known as the ?Waterloo Banquet,? in the possession of the Duke of Wellington, was exhibited in 1842, and engraved by Charles G. Lewis. In 1843 appeared ?John Knox endeavouring to restrain the violence of the people at Perth.? Knight became a royal academician in 1844, and in 1848 was elected secretary, after acting in that capacity for a year previously as deputy of Henry Howard (1769-1847) [q.v.]. This office he retained until 1873, and discharged its often irksome duties with much tact and ability. In 1848 also he exhibited the ?Peninsular Heroes,? which has been engraved by Frederick Bromley. Many of his works were presentation portraits, among them being those of James Walker, for the Institution of Civil Engineers; Arthur, duke of Wellington, for the City of London Club; Sir James Duke, bart., for the town-hall of Montrose; Sir Samuel Bignold, for St. Andrew''s Hall, Norwich; Sir George Burrows, bart., for St. Bartholomew''s Hospital; John Crossley, for the town-hall, Halifax; the Duke of Cambridge, for Christ''s Hospital; and Sir Charles Lock Eastlake, P.R.A., presented by the painter to the Royal Academy. His sitters were very numerous, and some of his portraits have been engraved. He exhibited last in 1878, in which year he was nominated a knight of the Legion of Honour.Knight died at 24 Maida Hill West, London, on 26 March 1881, and was buried in Kensal Green cemetery. He was an ardent follower of Edward Irving, and held high office in the catholic apostolic church. His wife, who died before him, exhibited at the British Institution and elsewhere between 1832 and 1837 a few pictures of domestic subjects. SourcesArt Journal, 1849 p. 209 (autobiographical sketch, with portrait), 1881 p. 159; Times, 30 March 1881; Illustrated London News, 9 April 1881, with portrait; Athen?um, 1881, i. 466; Bryan''s Dict. of Painters and Engravers, ed. Graves, 1886-9, i. 738; Sandby''s History of the Royal Academy of Arts, 1862, ii. 174; Royal Academy Exhibition Catalogues, 1824-1878; Exhibition Catalogues of the British Institution (Living Artists) and Society of British Artists. ContributorR. E. G.
PUBLISHED 1892