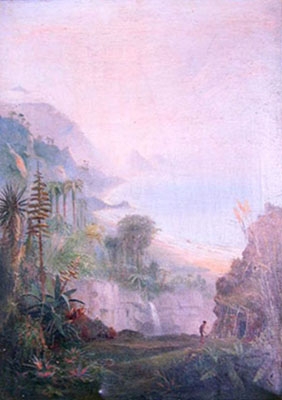 inscribed on the stretcher " JT Widdrington Esq and J J Onslow "
The Widdringtons of Newton were a powerful and influential land owning family associated with Northumberland as far back as the 12th-century. Theirs is a fascinating history coloured by Royalist favour, Jacobite sympathies and military honors. Descendents include William, 2nd Baron Widdrington (d.1675), an M.P for Northumberland who accompanied the Marquis of Newcastle to the Restoration of Charles II in 1660; William, 4th Baron Widdrington (1677/8-1743), who took a leading role in the northern English contribution to the Jacobite uprising of 1715; Captain Samuel Edward Cook, R.N. (1787-1856), who was awarded a rare group of orders and decorations by Dom Jo?o IV of Portugal, and who married Dorothy Widdrington, daughter of Alexander Davison, confident and agent to Admiral Lord Nelson. Alexander Davison (1750-1829), who worked for more than twenty years as a government contractor, providing uniforms, weapons, transport and supplies. He was very well connected with leading political figures, and his government contracts enabled him to build up a lucrative business. The profits from this helped him to buy a substantial house in St. James?s Square, London, where he regularly entertained Horatio Nelson and other leading figures of the day, including the Prince of Wales, the Duke of Clarence and William Pitt. He was soon wealthy enough to purchase, Swarland Hall and Park, Northumberland, and he spent a fortune improving the house and grounds and buying adjacent land, in addition to building an extensive collection of paintings, as well as fine collections of porcelain, jewels and books.
Captain J J Onslow was the son of Admiral Sir Richard Onslow who was second in command of the Camperdown. Captain JJ Onslow spent most of his Naval career in the royal navy working in the South American Station . He commanded various ships, HMS Clio,1832, HMS Daphne 1845, on the South American Staion. He was involved in the reclaiming of the Falkland Islands fro the British in 1833. The Widdrington family married into the onslow family in the late 19th century.