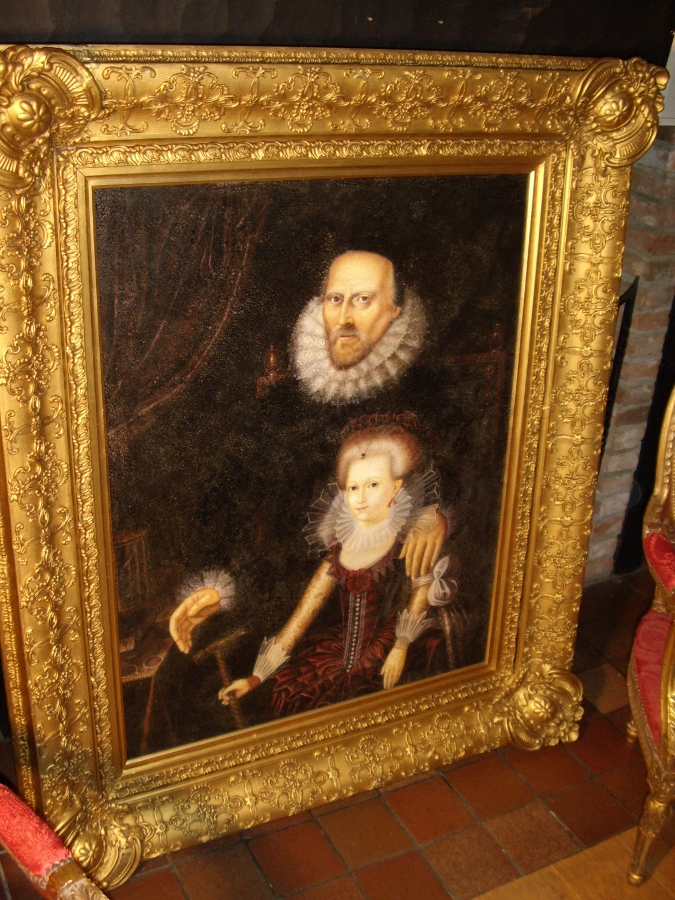 ABOUT THE ARTIST
John de Critz or John Decritz (1551/2 – 14 March 1642 (buried)) was one of a number of painters of Flemish and Dutch origin active at the English royal court during the reigns of James I of England and Charles I of England. He held the post of Serjeant Painter to the king from 1603, at first jointly with Leonard Fryer and from 1610 jointly with Robert Peake the Elder.De Critz was born in Antwerp. His Flemish parents brought him as a boy to England from Antwerp, during the Habsburg persecution of Dutch Protestants, and apprenticed him to the artist and poet Lucas de Heere, also from Antwerp, who may have taught members of the Gheeraerts family and Robert Peake as well.[1] De Critz established himself as an independent artist by the late 1590s, [2] and in 1603 he was appointed serjeant-painter to the king.SITTERS
FRANCIS WALSINGHAM
Sir Francis Walsingham was principal secretary to Queen Elizabeth I of England from 20 December 1573 until his death, and is popularly remembered as her "spymaster". Born: 1532, Chislehurst
Died: April 6, 1590, Barn Elms
Education: King's College, Cambridge, University of Cambridge
Spouse: Ursula St. Barbe (m. 1566–1590), Anne Barne (m. 1562–1564) Children: Frances Walsingham Sir Francis Walsingham (c. 1532 – 6 April 1590) was principal secretary to Queen Elizabeth I of England from 20 December 1573 until his death, and is popularly remembered as her "spymaster".Born to a well-connected family of gentry, Walsingham travelled in continental Europe after leaving university before embarking at the age of twenty on a career in the law. A committed Protestant, during the reign of the Catholic Queen Mary I of England he joined other expatriates in exile in Switzerland and northern Italy until Mary's death and the accession of her Protestant half-sister, Elizabeth.Walsingham rose from relative obscurity to become one of the small coterie who directed the Elizabethan state, overseeing foreign, domestic and religious policy. He served as English ambassador to France in the early 1570s and witnessed the St. Bartholomew's Day massacre. As principal secretary, he was a supporter of exploration, colonization, the use of England's maritime power, and the plantation of Ireland. He worked to bring Scotland and England together. Overall, his foreign policy demonstrated a new understanding of the role of England as a maritime, Protestant power in an increasingly global economy. CONDITION
The surface finish has been produced to emulate an aged 16thc.appearance having a realistic heavy craquelure throughout providing a charred look often seen when pictures have been hung above open fires.
The frame is a re-gilded early 19thc antique example.ELIZABETH I (TUDOR)
Elizabeth I (7 September 1533 – 24 March 1603) was queen regnant of England and Ireland from 17 November 1558 until her death. Sometimes called "The Virgin Queen", "Gloriana" or "Good Queen Bess", Elizabeth was the fifth and last monarch of the Tudor dynasty. The daughter of Henry VIII, she was born a princess, but her mother, Anne Boleyn, was executed two and a half years after her birth, and Elizabeth was declared illegitimate. Her half-brother, Edward VI, bequeathed the crown to Lady Jane Grey, cutting his two half-sisters, Elizabeth and the Catholic Mary, out of the succession in spite of statute law to the contrary. His will was set aside, Mary became queen, and Lady Jane Grey was executed. In 1558, Elizabeth succeeded her half-sister, during whose reign she had been imprisoned for nearly a year on suspicion of supporting Protestant rebels.LINK To Full Details:
http://en.wikipedia.org/wiki/Elizabeth_I_of_EnglandReign 17 November 1558 – 24 March 1603
Coronation 15 January 1559
Father Henry VIII
Mother Anne Boleyn
Religion Anglican .MEASUREMENTS Including Frame
HEIGHT 58 INCHES
WIDTH 49 INCHES
DEPTH 6 INCHESTELEPHONE ENQUIRIES 07765 856171
HOURS 10AM - 10 PM 7 DAYS A WEEKDELIVERY UK MAINLAND & WORLDWIDE
QUOTES AVAILABLE ON REQUESTOUR REF : 0484