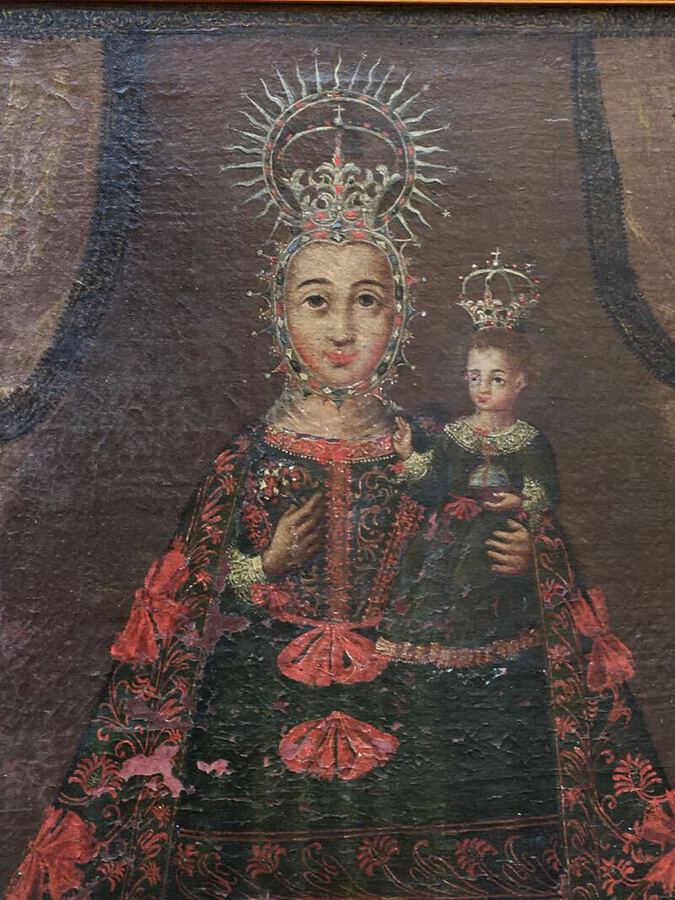 Oil on canvas mounted on canvas representing a Madonna carrying a child. Like all the works of this school this one is characterized by the delicacy and the delicacy of the subject as well as by the opulence of the precise details of the costumes depicted. The CUZCO School was founded by two Italian painters, Bernardo BITTI and Angelino MEDORO around the middle of the 16th century at CUZCO which was at the time the new conquered capital of the Inca Empire. They discovered that the indigenous people had - apart from other highly developed talents - a very special aptitude for painting, - although their subjects were largely or exclusively - scenes from nature, such as flowery and rural landscapes. with birds and trees. The newcomers of the time of BITTI and MEDORO taught them everything about plastic and human forms, and their characteristics as well as - Most importantly - EVERYTHING about Catholic FAITH. This is how the CUZCO School, forming an integral part of the Theological College of San Antonio, began to produce almost exclusively Works with Religious Themes (of course, the Pictorial Art of the time only represented Religious Scenes) - but executed by the clever mixture of two styles: Indigenous Naturalness and European Sophistication - a kind of Cultural and Religious Osmosis (source: Podcast Journal - Peruvian Arts).
canvas 64 x 49 cm
frame 78 x 63 cm