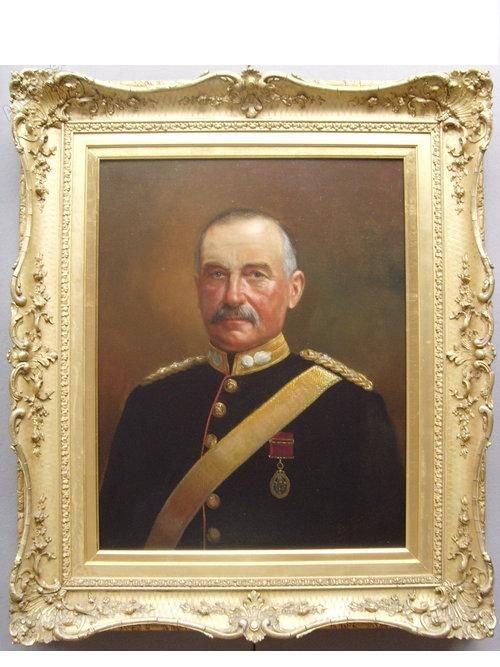 I am delighted to offer for sale this superbly executed oil portrait by the German artist Eugen Schwarz, who has signed the painting in the lower right hand corner and inscribed the word 'London'
below his signature.

The provenance of the painting is by descent from the family.We have confirmed the sitter is the said Colonel Stanley Arnold, as there is a smaller, but virtually identical painting of him in the Museum of Liverpool, where his title is given as 'Colonel S. Arnold Commanding Officer of Lancashire Royal Garrison Artillery Militia (1888-1904)'.
The museum lists it as being by an unknown artist, but, in our opinion it is also by Eugen Schwarz.Colonel Arnold is seen in his navy blue uniform, with the artillery grenades on the collar, gilt epaulettes and a gold braid sash.
The medal Col Arnold is wearing is the Companion of the Order of the Bath (Civil division) pre-1917 breast badge(See Image 8 below)This research has been very kindly supplied to us by an EBAY member,who we are grateful to for their help.Link below is attached to a website about medals.http://www.omsa.org/photopost/showphoto.php?photo=1095&size=bigEUGEN SCHWARZ Was born in May 1851 in Burgheim, Germany. He was a portraitist and studied under Ferdinand Keller in Karlsruhe and under H. Canon in Vienna. He worked in Berlin from 1896, where he died in 1904. Source Benezit.Stanley Arnold was born in 1845 in Walton, Liverpool, the son of Samuel J. Arnold, a general produce broker. He had a monied background and in the census of 1871, at the age of 26, was living with his 21 year old wife Frances Elizabeth (nee Edwards) at 30 Gloucester Place, London W.1 with a butler, cook, housemaid and lady's maid. He joined the Royal Lancashire Artillery as a Captain in 1872 and is shown on the Army List in 1878. The base for the Royal Lancashire Artillery was the Seaforth Barracks in Liverpool.The Royal Lancashire Artillery Militia, was one of many militias throughout the country, which were incorporated in the early twentieth century into the newly formed Territorial Force.By 1881 and also 1891, the family were living at Addlestrop House, Stow on the Wold in Gloucestershire and Stanley was a Lieutenant Colonel and Hon. Colonel, The Lancashire Artillery, Southern Division, Royal Artillery. He was also a Justice of the Peace. The family, including his two daughters, had a multitude of servants. Addlestrop House is a beautiful mansion and a Grade II listed building, images are on google.By 1901, they had moved to Barton House, Barton on the Heath, Warwickshire,a superb building, but on the 14th March,1906 Stanley Arnold died at Chipping Norton,Oxfordshire,two years after his portraitist.The painting is framed in its original 5 1/2" ornate, swept gilt frame and slips and will be supplied wired and ready to hang.MEASUREMENTS(Including Frame)
HEIGHT 39 1/2 Inches (103cm)
WIDTH 33 1/4 Inches (84.4cm)CONDITION
Very good condition commensurate with age.
There are no repairs to the canvas. There are no stretcher marks, craquelure or paint loss.
The gilt frame is original to the painting and the plaster mouldings have some signs of shrinkage with age and fine cracks as per normal.There have been some old minor repairs to the frame,but not too obvious.There is a very smaller version of our quality signed original in the Liverpool National museum.
Copy & Paste Link below:http://www.bbc.co.uk/arts/yourpaintings/paintings/colonel-s-arnold-commanding-officer-lancashire-royal-garr104339HOURS 10AM - 10PM 7 DAYS A WEEK BY APPOINTMENT ONLY
DELIVERY UK MAINLAND & WORLDWIDE / QUOTES ON REQUESTTELEPHONE ENQUIRIES 01530 411126 or 07765 856171
OUR REF 0601