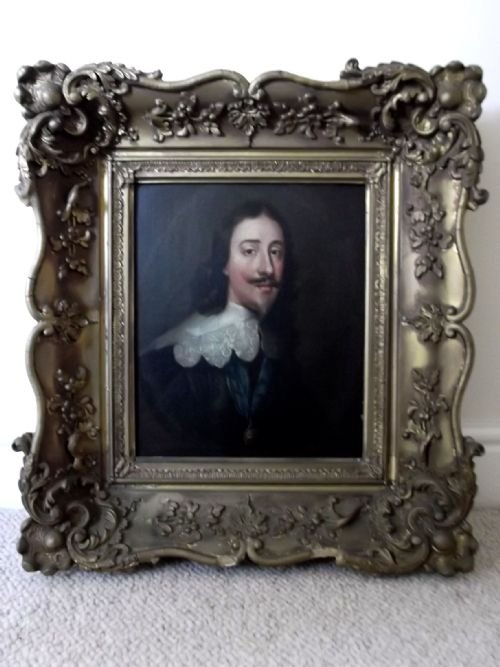 This portrait on canvas is an excellent version of one of Van Dyck’s finest portraits of Charles I and depicts him wearing the Order of the Garter on a blue silk ribbon with a gold locket attached.
>
SIR ANTHONY VAN DYCK (22 March 1599–9 Dec 1641) was a Flemish Baroque artist who became the leading court painter in England, after enjoying great success in Italy and Flanders. He is most famous for his portraits of Charles I of England and his family and court, painted with a relaxed elegance that was to be the dominant influence on English portrait-painting for the next 150 years.
>
These reduced portraits of van Dyck's works are difficult to date precisely,but copies were produced around the middle of the 17th century, particularly during the time of the English Civil War and the King's execution in 1649. They were much in demand as 'cabinet' pictures, adorning the private walls of Royalist supporters. (The 'cabinet' in the 17th century was a small, intimate room in which were kept items important to the owner,and only their closest friends would be admitted).
>
One of the series of portraits after Van Dyck and Lely. By the reign of George III they were attributed to Theodore Russell (1624-88), nephew of Cornelius Johnson, but on stylistic grounds and format they are now attributed to Remigius van Leemput, believed to have been at one time an assistant in Van Dyck's studio.
>
REMIGIUS VAN LEEMPUT,(1609?–1675), painter, born at Antwerp about 1609, was received into the Guild of St. Luke there in 1628–9. He came to England in Charles I's reign, and among other works for that king he made a small copy in oils of the famous painting by Holbein at Whitehall of Henry VII, Henry VIII, and their queens, which was afterwards destroyed by fire Van Leemput's copy is now at Hampton Court. He was one of the purchasers at the sale of King Charles's collection, and among his purchases was the great picture of Charles I on horseback, by Van Dyck (now at Windsor), which was recovered from him with some difficulty at the Restoration.
>
ABOUT KING CHARLES 1ST
Charles I (19 November 1600 – 30 January 1649[a]) was monarch of the three kingdoms of England, Scotland, and Ireland from 27 March 1625 until his execution in 1649.
Charles was the second son of King James VI of Scotland, but after his father inherited the English throne in 1603, he moved to England, where he spent much of the rest of his life. He became heir apparent to the English, Irish and Scottish thrones on the death of his elder brother, Henry Frederick, Prince of Wales, in 1612. An unsuccessful and unpopular attempt to marry him to a Spanish Habsburg princess culminated in an eight-month visit to Spain in 1623 that demonstrated the futility of the marriage negotiations. Two years later he married the Bourbon princess Henrietta Maria of France instead.
>
FRAME
Two missing pieces of plaster lower bottom now restored)
Presented in a later decorative moulded frame dating itself 1800-1810,having had some good old repairs which are hard to spot.Fairly original old gilt finish and suits the portrait.
>
CONDITION
The portrait has been relined and put onto a new stretcher 200 years ago and still has a very faint sign of an oval mount from the earlier 17th century period.
There are no visable stretcher marks or damage.
>
There is the normal fine craquelure as expected,but all painted surfaces are stable and requiring no work.
There has been old signs of a little minor retouching of the lace work.The portrait is ready to hang.
>
PROVENANCE
See Image 5 which shows Sutton Hall in Norfolk,
DATELINE Estimated to be mid-late 17thc (1650-60)
>
MEASUREMENTS (Including Frame)
Height 21 Inches
Width 19 Inches
ACTUAL CANVAS SIZE VISABLE
Height 12 Inches
Width 10 Inches
>
TELEPHONE ENQUIRIES 07765 856171 VIEW BY APPOINTMENT
DELIVERY UK MAINLAND & WORLDWIDE / OUR REF 0608

* NO OTHERS AROUND AT THIS GENUINE BARGAIN PRICE