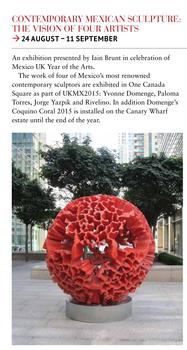 One Canada Square to host exhibition of contemporary Mexican sculpture as part of Mexico-UK Dual Year 2015
Artists include well-known Mexican sculptors Yvonne Domenge, Rivelino, Paloma Torres and Jorge Yazpik
Bank Street on Canary Wharf Estate will also showcase Yvonne Domenge’s two-metre diameter Coquino Coral 2015
Work by some of Mexico’s most admired modern sculptors will be on display in London for the first time in a free exhibition of Mexican contemporary art taking place in the lobby at One Canada Square. The exhibition will run for three weeks from Monday 24 August until Friday 11 September.

Curated by Iain Michael Brunt of www.gonemodern.com and Katrinka Wood, a specialist in Latin American art, the exhibition is part of a wider project – Contemporary Mexican Sculpture: The Vision of Four Artists – which will display recent works in bronze, resin and stone by Mexican artists Yvonne Domenge, Rivelino, Paloma Torres and Jorge Yazpik. These eye catching works will feature in prominent locations across the London, including Bank Street in the Canary Wharf Estate, to celebrate Mexico-UK Dual Year 2015. Supported by the Mexican Embassy, the project was proposed by Nuri Contreras Martret of Art4 and is sponsored by Lodgeo.

On display in One Canada Square will be smaller works by the artists, including a collection of maquettes of the monumental works that will be installed in outdoor spaces across London. The collection of works will represent Mexico’s best-known sculptors spanning many decades, as part of Canary Wharf’s ‘Sculpture at Work’ exhibition programme.

The works by the well-established sculptors represent generations between the 1940s and 1970s and aims to present pieces that encourage public reflection of different aspects of the contemporary human condition and demonstrate a variety of sculptural languages. The project also aims to showcase large-scale sculptures designed specifically for public spaces.
Details of the works on display at One Canada Square lobby by each of the artists are as follows:

Yvonne Domenge
Yvonne Domenge’s two-metre diameter Coquino Coral 2015 will feature on Bank Street. The fibreglass and sand evokes the beauty and fragility of coral formations. Meanwhile, her bronze sculpture Flower 2015, which will be on display at One Canada Square, has a lustrous finish, reminiscent of the beauty of nature.

Rivelino
In One Canada Square he is showing three works: Interior Answers XXV 2010, Playing with Fire III and Playing with Fire VII both of 2013. The youngest of the four artists, Rivelino’s themes are derived from situations or issues of public and current interest.

Paloma Torres
Two of her works are showing in One Canada Square, created in high temperature ceramic: 3 Spheres 3 Images 2010 and Totem with Urban Structures 2011. Paloma’s works are shaped by her belief that that all city spaces shape the spirit of their citizens.

Jorge Yazpik
His work is abstract and geometrical and is characterised by his handling of mass and the play of light, achieved by creating cracks and grooves. Three untitled works, two carved in obsidian and one in jade will be on display in One Canada Square.