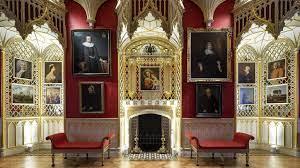 The Strawberry Hill Trust is appealing for public donations to buy a painting by William Hogarth (1697-1784) of Horace Walpole. A painting by William Hogarth (1697-1784) of Horace Walpole, later 4th Earl of Orford (1717-97). It depicts the young Horace in a landscape with a sundial and a Cupid statue pointing to the Roman numeral 10 on the dial. The dog is one of a long line of spaniels owned by Horace throughout his life.

Walpole – the 4th Earl of Orford (1717-97) – lived at Strawberry Hill in Twickenham and the portrait has been on loan to the house from a private collection until now.

The trust has an opportunity to buy the painting from the private collection as it has been offered to the nation in lieu of death duties.

However the painting has been valued at more than the tax due which means there is a £230,000 funding gap.

The National Heritage Memorial Fund has donated £115,000 and the Art Fund has given £90,000. The remaining £25,000 is being sought from the public via the Art Fund’s crowdfunding platform, Art Happens. The funds are needed by April 14.

Auction house Christie’s has advised the trust on the acquisition.

Strawberry Hill director Derek Purnell said: “The value of this painting lies in the fact that it allows us to celebrate Walpole and Hogarth at the same time, their contributions to the 18th century British art world and their relationship. Both Walpole and Hogarth, in different ways, challenged the prevailing 18th century classical ideal in art and played a defining role in shaping an authentically English school of painting and architecture, with their ideas having a considerable impact on subsequent generations.”

The trust said the picture was of “exceptional interest” as it is the earliest surviving oil portrait of Walpole; a rare and significant example of Hogarth’s early mature pictorial work; the earliest-known commissioned picture of an identifiable sitter by Hogarth and his first-known portrait of a child.

The painting was commissioned by Horace’s father, Sir Robert Walpole (1676-1745), the first British prime minister, when his youngest son was aged 10 and a pupil at Eton.

Horace grew up to be an historian, collector, and social commentator and his home, Strawberry Hill, is one of the original and best-known examples of Gothic Revival architecture.