“I’ve worked very  hard, in order to give back.” Giulia Maria Crespi was an Italian media proprietor. She was a non-profit executive and environmentalist who founded Fondo Ambiente Italiano (FAI) whose model is The National Trust in the UK.  FAI’s properties include numerous castles, gardens, monastic buildings and other cultural assets throughout Italy. She became Knight Grand Cross of the Order of Merit of the Italian Republic. Crespi died on 19 July 2020, aged 97.

Giulia Maria Crespi lives in an elegant palazzo in the centre of Milan.  The windows overlook a leafy courtyard with garden, and one feels like a character out of a Stendhal novel here. The only nod to the modern world is a black telephone, though it is from forty years ago, sitting on a table.

Signora Crespi, you are an elegant and aristocratic lady who has always  found the time to work, first at the Corriere della Sera [an Italian daily newspaper] and today for FAI [the Italian National Trust].

I am not elegant, and I don’t have time for that. I work on FAI, quality nutrition, and biodynamic agriculture. I attended a course held in my company on nutrition for cancer patients. But I’m dejected because there is often talk of nutrition that focuses on products that aren’t harmful to the environment, but there’s not much talk of proper nutrition for cancer patients. Those who are sick were not sufficiently warned about the dangers of agriculture that relies on chemicals.

Why is this so important to you?

I’ve had cancer a few times. I never did chemotherapy, and I feel great. I have a company, headed up by my son Aldo Paravicini, that makes natural foods. I put a great focus on this type of agriculture out of love for the land and as a way to show solidarity.

“I would like to able to provide everyone with healthy food and a country that isn’t in ruins.” 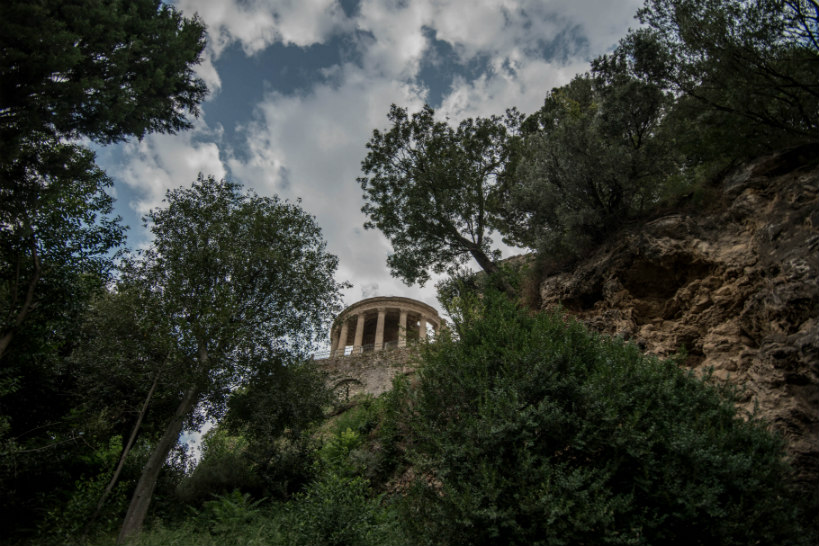 Parco Villa Gregoriana: This scenic park, laid out by Pope Gregory XVI in 1834, cascades down a steep, thickly wooded gorge overlooked by a 2nd-century BC Roman temple.

Why do you work so hard?

I believe in what I do.  Providing healthy food does me good, and trying to prevent our landscapes and monuments from falling into ruin is a way to help people physically and spiritually.

Did you learn this from your father?

The “haves” must give back. I quite like doing this, and I’m not even tired despite the fact that I’m 78 years old.

When did you begin working on social issues?

When I was 12, I began working for “L’Ape Laboriosa” to help  poor children. I began working on environmental issues in 1965. I founded FAI with others, taking inspiration from my friend Elena Croce who believed that it was important to found an organization like the British National Trust.

What kinds of results have you seen?

We could restore more heritage landscape assets if we had more funds. We are really fighting to get more bequests. All it would take is for someone to leave us one million…

What relationship does FAI have with the government?

We get very little from the government, but the Piedmont region, where there is more of a civil sense, helps  us, as do other regions, Lombardy to some extent as well. Revenue mainly comes from sponsors and our 50,000 members. But we never have enough money. For example, in an area near the reception rooms of the Manta Castle, near Saluzzo, we discovered traces of frescoes from the same era as the 1420 reception room (late Gothic), which were part of the main floor, and we need to restore those. But we need 600 million to do it.

“My love of the land and my fight against chemicals used in agriculture keep me going at 78 years old.”

You are from Lombardy, but you  talk about Piedmont quite a bit.

Yes, but we have quite a few sponsors in Lombardy, and we have six beautiful FAI properties. The rest can be found throughout Italy. We’ve also recently  opened the Kolymbethra Gardens in the Valley of Temples in Agrigento. I have to say that sitting in that wonderful place, I was truly  content.

Can you tell me about other magnificent places?

In the spring, we will open our property in Leranto, on the Amalfi Coast. It’s a magical place donated to FAI by Prodi, and I hope he will come to the inauguration.

You’ve also worked to defend the Masino Castle, which risked being turned into a sort of Disneyland.

I carry out these battles because, in Italy, not many of our landscapes have remained intact. We aren’t against the creation of a sort of “Disneyland,” but they should do it in one of the blighted areas outside of Ivrea. So with this Disneyland, they could create jobs and depollute the land.

What relationship do you have with Milan?

I live here. Of course, the air is really polluted, but this is my home. I have to say that Rome has a special place in my heart and, in the last few years, the historic centre has been really beautified. But, getting back to Milan, I can’t forget how the outskirts are neglected and lack in services. But my great love is La Scala.

What will become of La Scala?

I don’t know. I haven’t yet seen the new theatre.

Are you a music lover?

Yes. I really like music. Actually, I’m about to leave for Berlin to hear Parsifal performed by the Berliner Philharmoniker.

Why don’t you like to talk about your past?

I believe in the future and the present. I will write a book when I’m very old, can no longer get around, and can no longer work for FAI.

It seems like you are hesitant to talk about the Corriere, which belonged to your family.

No. It is that I’d have to speak poorly of certain people, and I don’t want to do that. We greatly need positivity right now.

Have you left the world of publishing behind?

I think the media is important, in order to engage, to raise awareness with people, provided the publisher wants to do that.

Do you still frequent journalists and intellectuals?

I frequent many people. From farmers to journalists. I don’t discriminate. 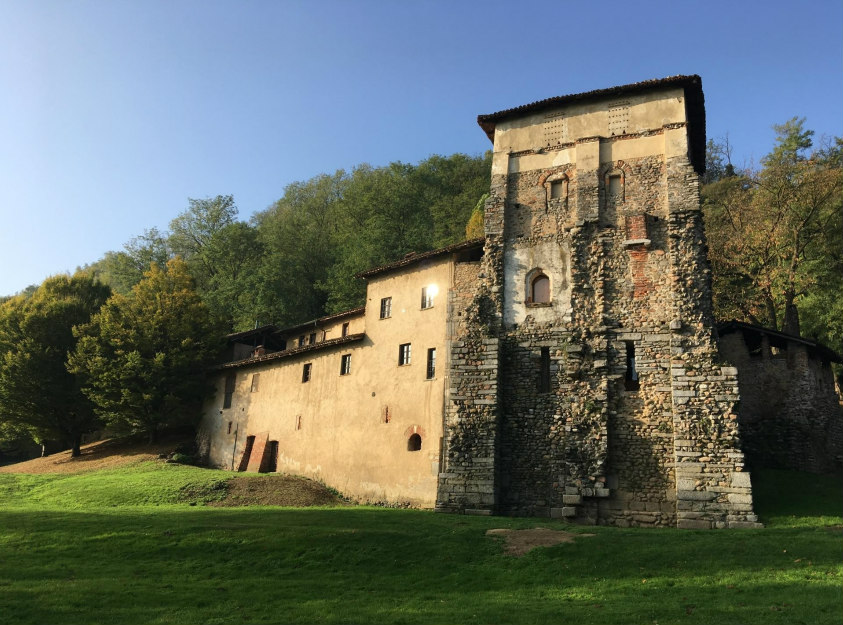 Torba Monastery is a former Benedictine nunnery in Lombardy. The abbey was entered on the UNESCO List of World Heritage Sites in June 2011. 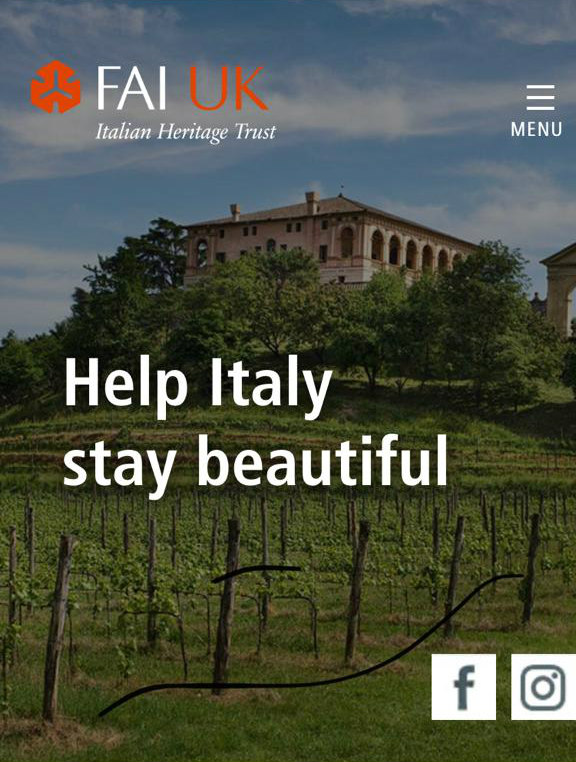 FAI UK: Italy has shaped all of us and is our heritage too. We take for granted that it will always be there for us, but beauty and antiquity need constant vigilance and care to survive. They belong to the world and need the help of the whole world. FAI UK and FAI exist to enable this to happen. 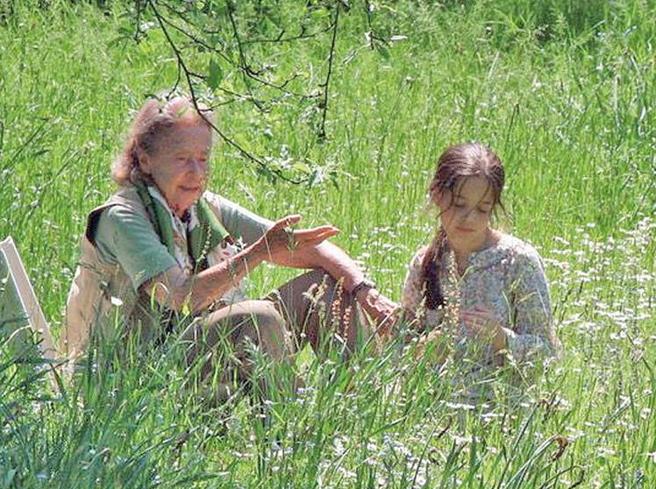 Giulia Maria Crespi worked hard to restore and preserve the patrimony of Italy for future generations. 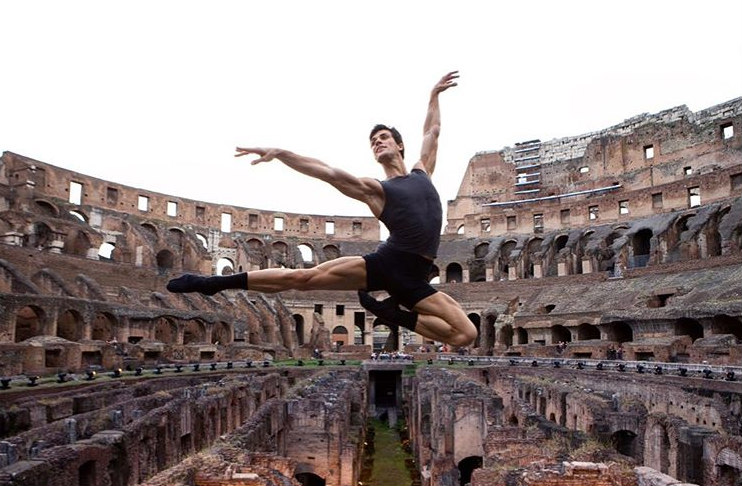 Famed dancer Roberto Bolle published this image in her honour, saying: “Thanks to Giulia Maria Crespi for having fought so many  battles to save our country’s cultural and landscape heritage with courage, tenacity, and foresight. She was an enlightened woman and we should all be infinitely grateful to her.”

In St. Francis’ woods beneath Assisi can be found the Rebirth Symbol, developed by Italian artist Michelangelo Pistoletto, representing the ‘rebirth’ of society – a new world, where the ‘human community’ is united, dialogue between opposites is fostered, and balance and harmony is achieved. 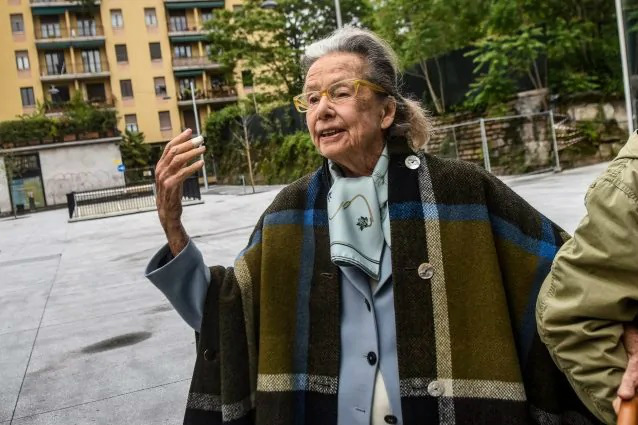 “I had cancer and never did chemo. Nutrition is fundamental.”

Do you think museums should be privatized?

Everything could be but with a great deal of support from the proper cultural departments of the government. The private sector also has to have a charitable spirit and not just think about earnings. It is rare for cultural properties or even parks to be profitable.

What do you mean by that?

I want more tourists to be able to come. In terms of the national parks, I tried to convince the Ministry of the Environment – which is getting rid of the boards of the national parks and replacing them with a commissioner that it hand selects  – pointing out that the parks are in the red. This decision is very worrying for many nature lovers.

Are you an impassioned woman?

Yes, I would  say so. I am also a grandmother with seven grandchildren.

Do you find time for them?

Not enough. I try to read with them, to show them affection and to offer them simple yet wonderful experiences.

My daughters-in-law say so, but I wish I weren’t.

Do they say you are authoritarian?

Yes, I think this is one of my negative qualities. I would like to try to understand people, but I don’t think I’m fully able to.

What plans do you have for the future?

To continue doing what I’m doing. But I would also like to have more time to take walks in nature and to read. Despite everything, Italy is the most beautiful country in the world.

Do you look to any particular country as a model?

England for its civic sense and respect for nature and the environment, for the way the English live because they are able to laugh at and truly see themselves for who they are. In Italy, nobody tries to do this.