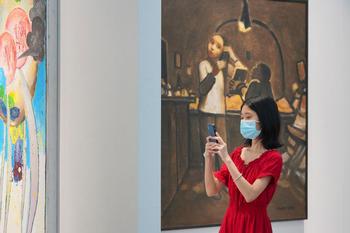 The reality is beginning to dawn that mass events will not return any time soon. It was a coincidence, but felt significant, that on the same day in January both Art Basel and the UK’s Glastonbury music festival cancelled their landmark June events—for the second year in a row.

Both began in 1970, but their pandemic messaging is different. Glastonbury’s organisers have been clear about the “severe financial implications” of the cancellation. Art Basel, and other art fair organisers, are still putting on a brave face. Most such events are being “postponed” rather than outright cancelled, which has the added benefit to organisers of being able to roll over any fees paid in advance by exhibitors. Glastonbury—which makes more money from ticket sales—does not have such a luxury.

But this can’t continue for art fairs either, as galleries cannot risk their cash indefinitely. Only the better funded fairs will survive two years of no revenue. “It’s a case of having enough in your pocket to play with,” says the event organiser Tim Etchells. His fairs include Art Central in Hong Kong and Singapore’s Art SG—which has yet to have its first edition. Etchells assures me, though, that his business is “well-resourced” to face what is looking like another fallow year.

The big-brand art fairs are trying to be a bit more creative than “put it all online” this time. A few, including Art Basel in Hong Kong, still hope to press ahead in real life, (albeit much smaller) this May. To swell the ranks, it will incorporate Art Central and has offered to host relatively low-priced stands for overseas dealers who can send their art but not themselves.

Frieze’s organisers are still committed to running a smaller event in New York in the same month and have also launched a new subscription model for their magazine with future plans for a membership scheme for new collectors.

Most significantly, Frieze is to open a gallery hub across two buildings on London’s Cork Street for a rolling programme of “ambitious” four-week exhibitions. It’s a similar model to London’s Cromwell Place though requires a shorter-term commitment from galleries and is on a much smaller scale. If fully occupied, the hub could bring nearly £800,000 annually and is a scalable project that is much more realistic than a mass event in the mid-term.

For now, though, none of these initiatives will bring in the big bucks necessary for the Old Normal—though, frankly, I don’t think that is what’s needed anyway. All are decent ways to keep an important sense of community and buy time for event organisers to figure out what comes next. Glastonbury recently launched the first cheddar cheese from its farm, which is certainly food for thought—though possibly too off-brand, even for an event in Switzerland. But art fair models have to change, whichever way organisers want to slice it.