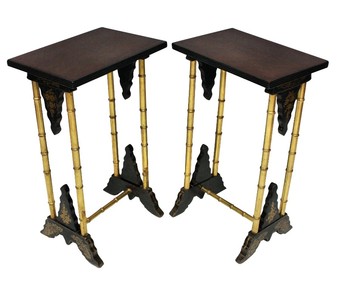 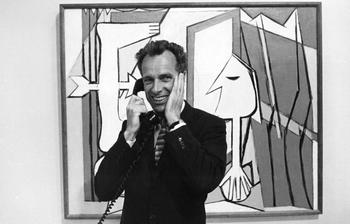 In 1955, Ernst Beyeler was transfixed by Picasso’s Guernica at the Palazzo Reale in Milan, and the Spanish painter has been his idol since that day. He began to collect the artist’s works and went on to become one of the greatest dealers and collectors in Europe. Beyelerwas “Europe’s pre-eminent dealer in modern art”, according to The New York Times and “the greatest art dealer since the war”, according to The Daily Telegraph. In 1982, he and his wife Hildy founded the Beyeler Foundation to show his private collection, which on his death was valued at US$1.85 billion.

You went from being a shop assistant in a bookstore to one of the biggest art dealers in Switzerland in the twentieth century, and you also have one of the greatest modern art collections in the world…

Yes. My book of memoirs, “A Passion for Art: Interviews by Christophe Mory”, is coming out in Italy this June. I should point out that in this period there will be a surrealistic Picasso show at the foundation and an exhibition of Rothko’s works on paper in the gallery.

How do you divide your time now?

Usually, the afternoon in the gallery and the morning at the foundation.

What is the foundation working on right now?

The foundation is located in a building designed by Renzo Piano where there will be the new exhibition, Picasso Surrealista 1924-1938, from 12 June to 12 September 2005. This is the first exhibition devoted to this time period, which is quite significant but hasn’t been studied much as of yet. There are 200 works, many of which come from the Picasso Museum in Paris. A parallel exhibition of works by René Magritte entitled La Chiave dei Sogni is running from 7 August to 27 November 2005, and that will have ninety pieces from private collections.

“The criteria of our collection is “semi-abstract”.” 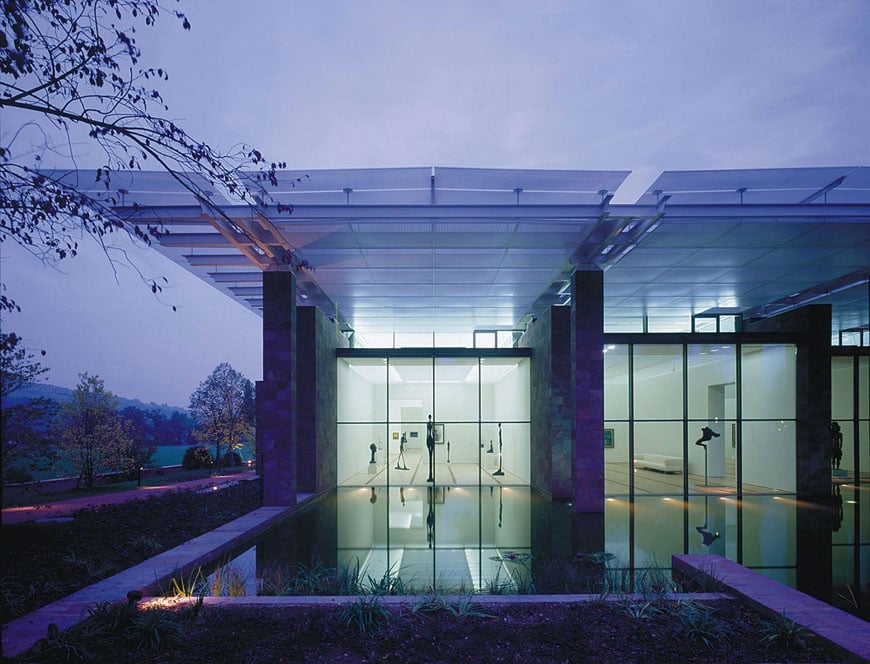 The Beyeler Foundation museum came into being between 1991 and 1997 when arts patron and collector Ernst Beyeler decided to share his extraordinary art collection with the public. It was built in the park of the 18th-century Villa Berower, which houses the museum’s offices and a restaurant. Photo Cristian Richters

Why did you choose Renzo Piano to create the Beyeler Foundation building?

I think Renzo Piano did an amazing job at the Pompidou Centre in Paris and the Menil Foundation in Houston, Texas.

How many people have visited the foundation?

Around 2.5 million. It is very important, and it has brought many important exhibitions to life. It is mainly a collection of abstract cubist and surrealist art.

You are a big Picasso collector, aren’t you?

Yes, around twenty-six paintings were bought as a single group from Picasso himself. I wanted to buy forty-five of them. Today, there are more or less thirty-five paintings. There are also paintings by Legér and two beautiful Kandinsky paintings.

In your memoirs, Picasso isn’t the only painter that makes an appearance…

No, there are mentions of artists like Giacometti and Dubuffet, and dealers like Kahnweiler and Wildenstein, as well as collectors such as Giovanni Agnelli, who bought a Klee and a Mondrian from me.

Yes, I have a group of fourteen Matisse paintings from different eras, and I even have an important group of Mondrians from his early to his later years. We also have six important Bacon pieces.

Do you have works by Lucian Freud? Next week, they are opening a retrospective of his works at the Correr Museum in Venice.

No. He’s a great artist, but he’s traditional. I admire Freud as an artist, but he doesn’t fit the criteria of our collection, which, let’s say, is “semi-abstract”.

In addition to purchasing for the foundation, do you still sell as a dealer?

Much less than before. A piece every once in a while. But I have to say that I’m mainly focused on the foundation.

“Today, in the art field, there’s much more style than quality.”

Ernst Beyeler, what did you write about in your book?

The story of my life. I explain how I changed course from a gallery to a foundation. I tell the story of fifty years of the gallery, which has held 250 very important shows. I talk about the quality of our exhibitions from the very beginning.

Has the world of collecting changed much?

What I mean is, are things very different now than when you began?

It has become a very selective world because everything is much more expensive than in the beginning.

Is the fact that the prices are so high dangerous?

I think it could be dangerous and create a lot of speculation. Let’s say that it is a much more speculative market, because people follow the fashions through mass media. Today, in the art field, there’s much more style than quality.

In your opinion, which artists will stand the test of time?

Some artists certainly will, such as Bacon and even Freud. Picasso, Matisse, Ernst and Mondrian will.

What about in contemporary art?

It is hard to say what is trendy and what isn’t.

What about the prices? 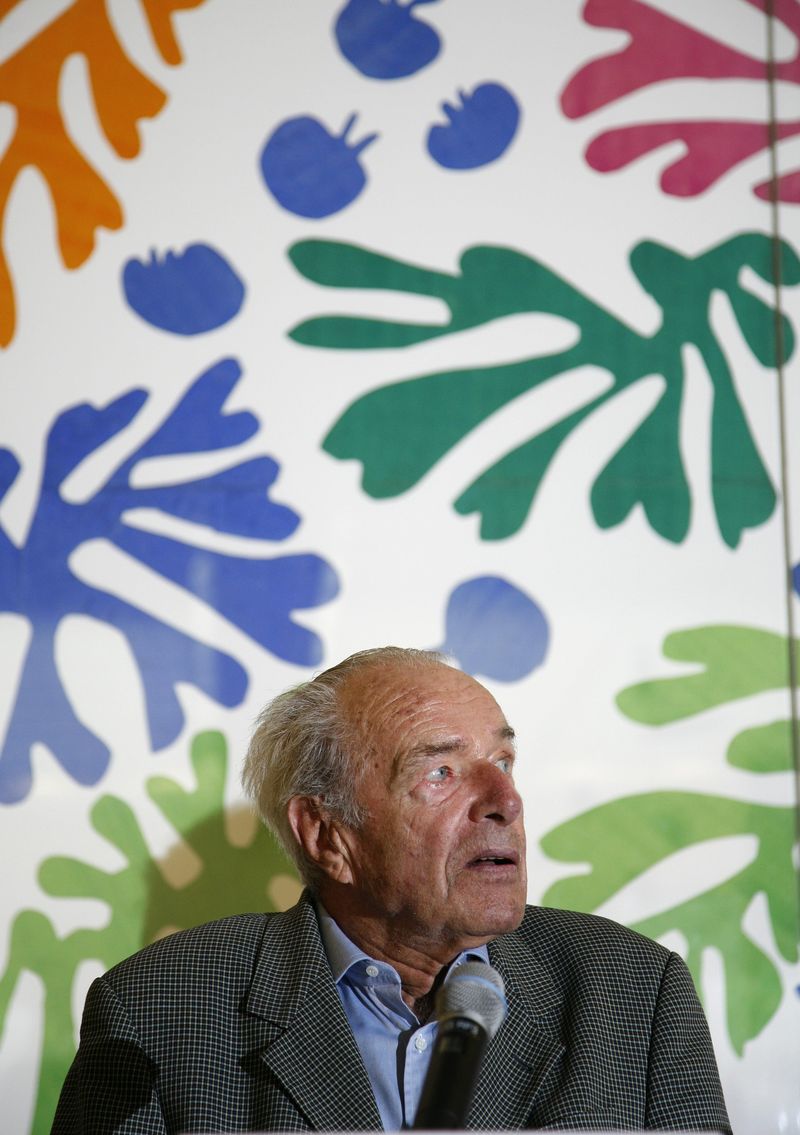 Ernst Beyeler speaks at a press conference in the Beyeler Foundation in Riehen on August 16, 2007. 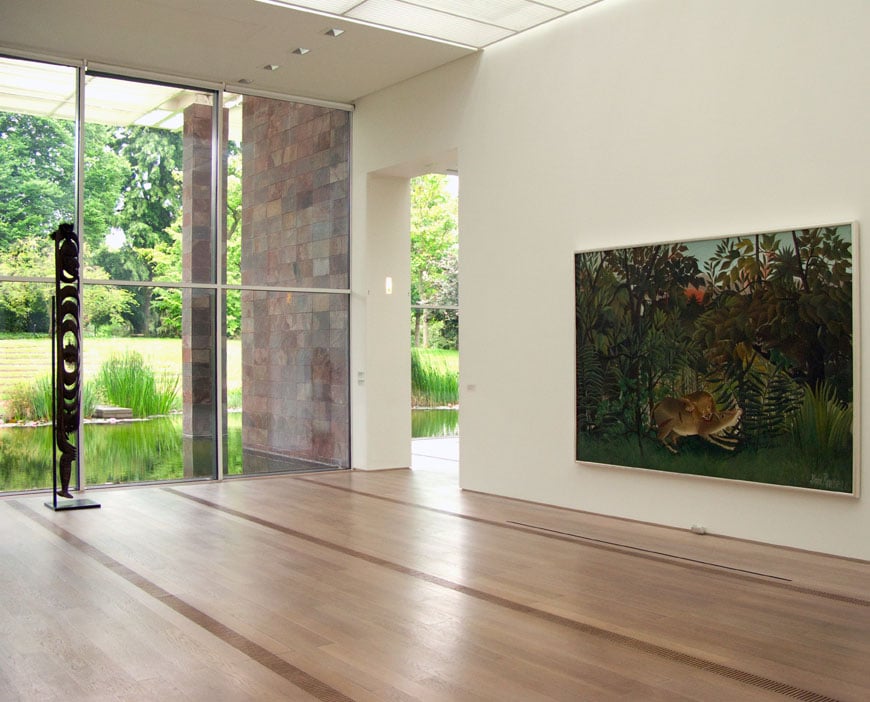 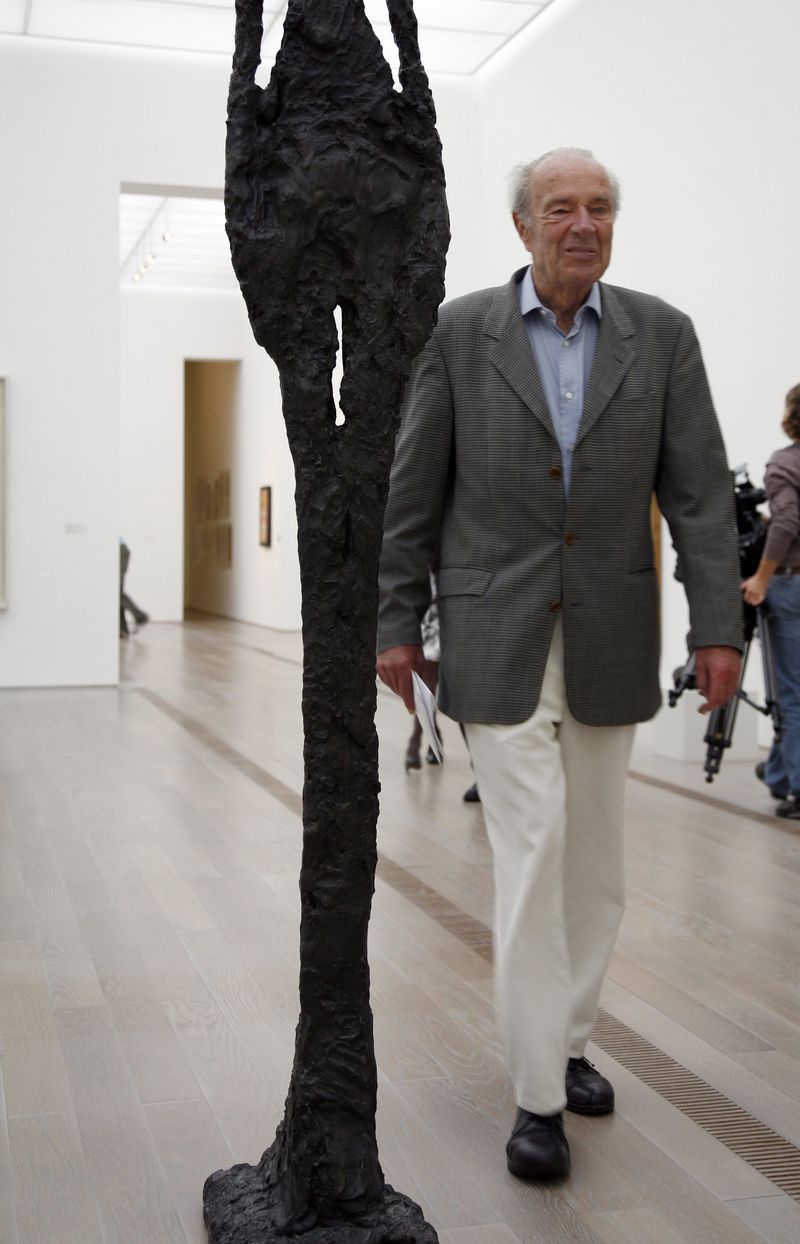 Ernst Beyeler walks in the Beyeler Foundation in the Basel suburb of Riehen, Switzerland, in this August 16, 2007 file photo. 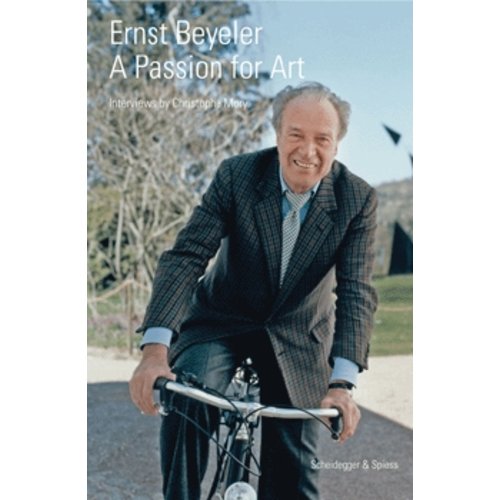 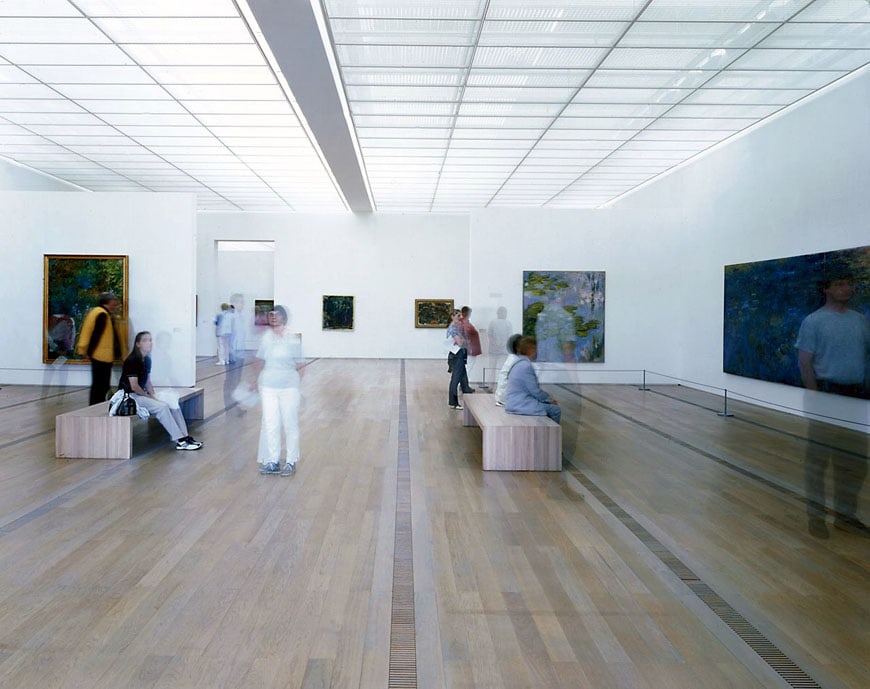 Beyeler Foundation, one of the exhibition rooms, photo Michel Denancé 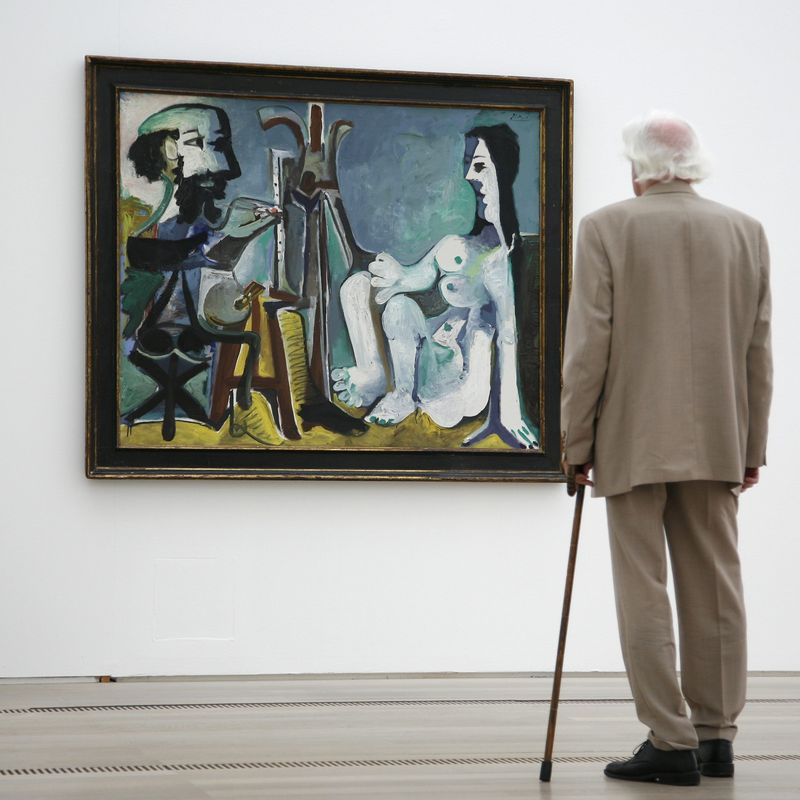 A visitor watches the work of art “le peintre et son modele” (the painter and his model, 1963) by Pablo Picasso (1881-1973) in the Beyeler Foundation in Riehen, Switzerland

“People who come say that we are good at what we do.”

Despite having the Beyeler Foundation, have you maintained your clients?

Not many, but some of them still hope I will be able to find an important piece for them.

What about your collection?

We continue to grow the collection, strengthening it. We want to maintain a high level of quality in our pieces.

How many years have you worked in the art world?

Sixty-five, and I have to say that I love my profession.

It is difficult to make discoveries because you need to look for quality, and in order to do that you have to travel a lot, see many exhibitions and many artist studios. For the time being, I’m staying where I know the artists well. That means cubism and abstractionism, which are the two most important movements from the previous century, along with surrealism.

Are you satisfied with your work and career?

Yes, because the people who come say that we are good at what we do, and I’m happy that people love my foundation. Today, we are number one in Switzerland in terms of number of visitors.

What is your formula for success?