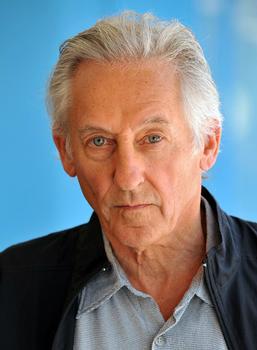 COURSE OF EMPIRE.  Over the span of his influential six-decade career the artist Ed Ruscha has shaped the way we see the American landscape.  Ed Ruscha’s elegant, highly distilled, and often humorous work conveys a unique brand of visual American zen.

What about your exhibition ‘Course of Empire’ which is at the National Gallery in London until 7 October, 2018, and is supported by Gagosian Gallery?

Why is their exhibition happening in London now?

Thomas Cole and the National Gallery are important to me.  One of the reasons this show is happening is because there is also a Thomas Cole exhibition at the National Gallery.  He painted in the 1820s, 30s and 40s in America, and died in the late 1840s.  Thomas Cole did a series of paintings called ‘Course of Empire’.  One day I was walking through the New-York Historical Society, and by accident came across these five paintings depicting the progress of a nation.

What are the five ‘Course of Empire’ paintings of Thomas Cole about?

The beginning one is of a ‘Savage State’, and it is developed from there.  The second shows a kind of Eden, and the third one is a larger painting called ‘Consummation of Empire’ and shows a Roman civilisation with prosperity and success.  And then the fourth is ‘Destruction’, where war comes into this beautiful civilisation; there is pillaging, murder and grim life, and you see the destruction of this great empire.  In ‘Desolation’, the fifth and final painting, the scene goes back to a savage state and returns to the beginning.

“Life and art is all so useless and valuable at the same time.”

What are your ten paintings about?

I was very inspired by Thomas Cole.  Not by his landscape paintings, but by his ideas.  My paintings are imaginary, and his are more based on real landscape, but the meaning is very similar.

Are your paintings and his exhibited together?

Mine are in a single room, towards the front of the museum.  You have to pay to see his, mine are free.

Are you the same kind of artist?

Are you a zen artist?

I’ll accept that term.  In the National Gallery exhibition my paintings are stacked one on top of the other, the black and white at the top and the new in colour down below.  The ones up above are imaginary buildings, and the ones below are those same venues many years later.

You are known for putting words on paintings?

The words are like signs on the buildings.  One early painting has ‘TELEPHONE’ on it; it’s a telephone call box.  In the later painting the call box has gone; they don’t use that call box any more.  Replacing it is a tree and a traffic sign.

When did you start to paint words?

I learned how to set type when I worked for a printer in art school.  I wanted to be a sign painter, and it just developed from there.  The idea of poetry, a selection of oddities of words, strange or double meanings, became my interest.  I began to see that painting words was a real thing, a legitimate subject matter.

Are you considered a Pop artist like Andy Warhol and Claes Oldenburg, or are you a loner?

In the 1960s I was put in with Pop artists.  Mario Schifano painted in that vein too.  I felt like we had a common interest in popular culture, which means ordinary things.  The curator Walter Hopps titled this movement ‘New Painting of Common Objects’.

You were in California, far from New York?

Yes, and Hopps was too.  He curated many exhibitions, with Robert Rauschenberg and other artists.  He was at The Menil Collection in Houston, and had the first Pop art show at Pasadena Art Museum in California in 1962.

Pop art came after the Jackson Pollocks and Mark Rothkos?

Every one of the so-called Pop artists loved and respected that school of painting called ABEX (Abstract Expressionism), myself included.  These were great artists making great art in expressionistic modes.  We all felt it was such a beautiful movement, but it was worked to death, and explored and defined and studied and hammered down.  It had been done, and there was very little room to add anything new to that story.

Was this why you did something else?

Yes.  It’s not true that Pop artists disliked Abstract Expressionism.  They were just doing something that was entirely different.

“I have changed, but it’s so slow. It’s slow like molasses.”

You picture Californian and American life with your words.  Do you do what the American Realist painter Edward Hopper did?

Similar, I think so.  The Abstract approach to the world eventually comes through our work too.  All art is made from other art.  It would be difficult to find any artist in history that was completely separated from the previous art.

What did you do after Pop art?

I made books of photographs, and then I was called a Conceptual artist.  The Conceptual artists were artists for whom physical artwork was finished.  Ideas were the basis for their art.  Mine was in-between, because I produced physical books.

Who significantly influenced you?

Jasper Johns was my introduction and connection with the art world.  I saw his painting of an American flag and I always think of it as the atomic bomb of my education.

Lawrence Weiner, who was a pure Conceptual artist.  He would make a verbal statement into a work of art.  “AN OBJECT TOSSED FROM ONE COUNTRY TO ANOTHER”  That statement would be his work of art.  That really defines what Conceptual art is about.  Thought was the essential ingredient in their work.  I was not firmly committed to the Conceptual art movement, because I still did paintings.

Many artists are defined within one movement, but you are not?

No, but I share some of the ideas, some of the thinking.  I don’t belong.  Any true artist is not exactly one thing and one thing only.  The ABEX painters even liked Surrealism, which was very much before them.  The world keeps getting more people, and consequently there are more artists today than ever before.

Are there new movements?

I think there are.  They are ill-defined, there’s nothing exact about the progress of history.  An artist comes along and does something a little bit different, and that is seen as being a new frontier.

Why is art so tied up with money nowadays?

We are in a prosperous time.  There is activity and interest, and many more people collect art than twenty years ago.  There is more demand, and consequently more artists with more statements.

How much have you changed over the years?

I have changed over the years, but it all connects back to when I was 18 years old.  The way I felt then is much the way I feel today.

What do you feel?

That I have some vague vision of life. “It all connects back to when I was 18 years old.”

What are you working on now?

An exhibition for the Vienna Secession museum in November.  Gustav Klimt was the founder.  I am showing some paintings of American flags, reproductions of earlier paintings.  In 1980 I did an American flag, and then another in 1996, and then I did one last year that is flying against a black background.  The wind is blowing it, and tearing it apart.  It is tattered.

What is the Secession exhibition called?

‘Double Americanisms.’  The second part of the exhibition will be a series of paintings on circular vellum drum skins with words around them.  I grew up with people who spoke with double negatives and used statements like, “I can’t not do that,” or, “I can’t find my keys nowhere.”  It’s like saying, “I can find my keys.”  Some of the drum skins have been played with and are dirty and old.  This is new work.

How much do you work?

Do you produce a lot of work?

It’s hard to think about the production of art.  I just keep making it.  Sometimes in four or five days I haven’t produced anything that I am happy with.  That doesn’t worry me.

Is it difficult to be new?

I have changed, but it’s so slow.  It’s slow like molasses.  It’s a slow process.

How do you feel about our changing times?

This is what I think is so interesting about Thomas Cole.  His five paintings are like a story from beginning to end, about the passage of time.  My work has a lot to do with the change of time.  I have been photographing Sunset Boulevard in the same way every year for about fifty years.  I go with an automobile and a Nikon camera, and photograph every storefront on both sides of the street.  It’s a study or a document of the change, and I feel like there is some important value to that way of thinking.  The Getty Museum has my archives of Sunset Boulevard, and next year I will photograph that again and give it to the Getty.

Are there any particular artists you admire?

Right now it is Thomas Cole which immediately comes to mind.  Throughout history I can’t think of anyone who shows the same scene 500 or 1,000 years later.  In literature I think of ‘The Picture of Dorian Grey’ by Oscar Wilde, but I don’t know of any other artist who has shown the same picture later and later and later and later.

The passage of time is your obsession?

Yes, a diary of my own life.  Life is a folly.  It’s all so useless and valuable at the same time.

Life and art is all so useless and valuable at the same time.