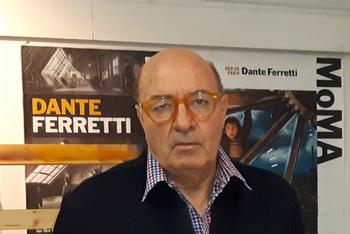 THE MULTI-AWARD WINNING IMAGININGS OF DANTE FERRETTI, the Italian production designer, set decorator and art director who has worked with acclaimed directors throughout his career. A protégé of Federico Fellini, he worked closely with Pier Paolo Pasolini and latterly even more so with Martin Scorsese.

Dante Ferretti, where are you at the moment?

I’m at home in Rome where I have a small office for creating my storyboards. I’m going to take a walk later, and tomorrow I will return to Cinecittà where I have my office. I feel more comfortable there because I have more space, all of my sketches and my storyboards. I’m waiting to be able to return to the United States, to Oklahoma where I am working on a film called The Killers of the Flower Moon with Martin Scorsese. It stars Leonardo di Caprio, and Robert de Niro will play William Hale, a serial killer.

Who are the female leads?

We were in the midst of casting when the coronavirus broke out, and everything came to a halt. We were working near Tulsa, in a town called Pawhuska, where we will shoot the film.

What is it about?

It is a western, set in Oklahoma in 1921 and 1922. There are cowboys with wagons and horses. The film is an adaptation of the David Grann novel of the same name, and it talks about the killings and the damage done to the Osage Native-American tribe. It tells the story of a tribe that was given a large swathe of land that white men had no interest in, and they really loved it there. The reservation was fenced in, and the tribe couldn’t get out. They slept in tents or huts. Then some young Native-American boys began digging holes in the ground and discovered oil. For about ten years, the Osage tribe were some of the richest people in the world. Then, just as happened in other places like, for example, the mines of Colorado, white European men moved in with force and took over, killing many Native Americans. Another interesting element of this story is the FBI, which had only recently launched, helmed by J. Edgar Hoover.

“It is terrible if people can’t go to the cinema or theatre or opera, but we will try to survive.” 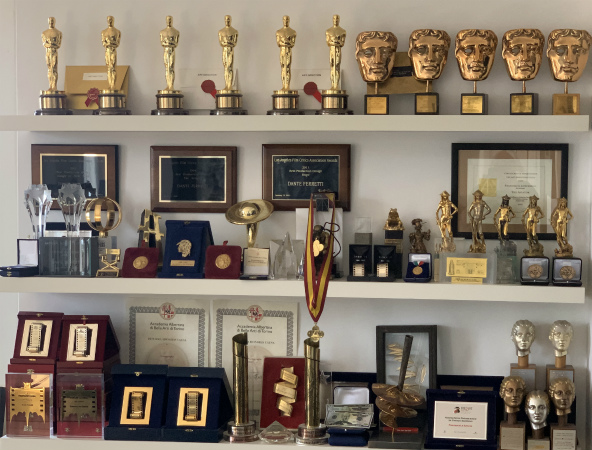 Dante Ferretti, getting back to you, what have you done during these past few months in Italy?

I have mainly worked on doing the storyboards for the film, which is a very big project. I did sketches. I worked on some operas, including La Bohème, which I was supposed to have done in Tokyo, but it was pushed back a year. I also worked on the one hundred year anniversary celebrations for Fellini, and reconstructed the Cinema Fulgor, first in Rimini and then at Cinecittà. I also reconstructed the bordello from the film City of Women. Actually, that film has great significance for me.

I met Martin Scorsese thanks to that film. I owe a lot to him and Federico Fellini. When we were filming City of Women in a bordello, Scorsese, who was a big fan of Fellini’s work, came to visit with Isabella Rossellini while they were on their honeymoon. Fellini said that certainly wasn’t the ideal setting for a honeymoon, but that’s where we met.

What happened after that?

Scorsese asked me to come and work with him, but I was working on Terry Gilliam’s The Adventures of Baron Munchausen. I was nominated for my first Academy Award thanks to that film. Not long after, one of Scorsese’s assistants, a guy of Italian descent, called me. He said, “Martin wants you for a film, The Age of Innocence.” I told him, “I’ll be there immediately!” I dropped everything I was working on, something I never did, and flew to New York.

The rest is history.

Which are the Scorsese films you’ve most enjoyed working on?

Without a doubt, Kundun, The Age of Innocence, and The Aviator.

I got a call from the city of Macerata because they want to build a large museum dedicated to my work. I was asked to illuminate a part of the city. The Jesuit priest Matteo Ricci was born there, and I was born not far away. Actually, in China they want me to rebuild a part of the monastery where Matteo Ricci lived, because he was someone who became very important in China. But the project is on hold for the moment.

Another thing I should mention is that I recreated Leonardo’s The Last Supper in Gent, Belgium, shot by Storaro and with costumes by my wife, Francesca Lo Schiavo. It is a ten-minute film, directed by Armondo Linus Acosta , but it is to be part of a larger movie. I think that is a really wonderful project, and it should be shown in Rome, Milan, and New York.

“I would rather be creamed than cremated, frozen and enjoyed like an ice cream, but not thrown out to sea.”

Dante Ferretti, if I’m not mistaken, haven’t you taken up painting in these last few years?

Yes. I’m doing very large paintings. They are figurative in a certain sense, like a series of ship relics. For example, I painted an anchor and a sunken ship. The art historian Achille Bonito Oliva asked if I wanted to put on an exhibition in one of the big museums in Rome, but that’s on hold for now as well.

How has this coronavirus period been for you?

I feel really bad about it because everything has come to a halt. It is difficult to live with masks, stay away from people, and never be able to see friends. It is an absolute disaster for everyone and as for the cinema, there isn’t much to say because you can’t even go to the cinema. It is terrible if people can’t go to the cinema or theatre or opera, but we will try to survive.

You’ve spent so much time at home, have you been watching many movies or television programmes?

Thankfully, there’s Netflix and we can watch films at home. And there are some television programmes that aren’t bad.

Which ones, for example?

I prefer not to say, for obvious reasons.

Do you think the popularity of television programmes will do damage to the film industry?

I hope everything will go back to how it was before. They say things will be sorted in a few months and get back on track, otherwise I could open a nice funeral home [he says with bitter irony], make fun coffins with televisions and iPhones inside, and that way people could call the dead. I would rather be creamed than cremated, frozen and enjoyed like an ice cream, but not thrown out to sea.

Considering you knew Fellini and worked with him for many years, do you think he would have made a film about this situation?

I don’t know if he would have made a film. This is reality.

Has this been a frightening time for you?

I never got down about it, and I just stayed home. But it’s not over. Who knows what may happen. I’m not at all worried, except for the fact that I wasn’t able to do the film I was working on with Scorsese, and I’m very sorry about that. Actually, he and all of the rest of us can’t wait to get back to it.

How have you been handling this?

And you’ve been quite successful…

Dante Ferretti: Design for ‘The Aviator’ 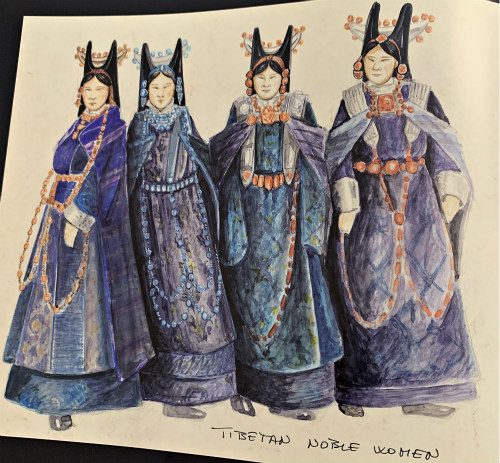 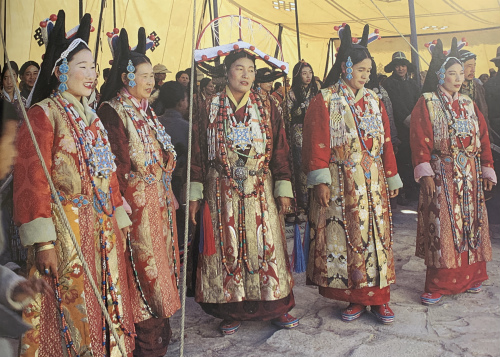 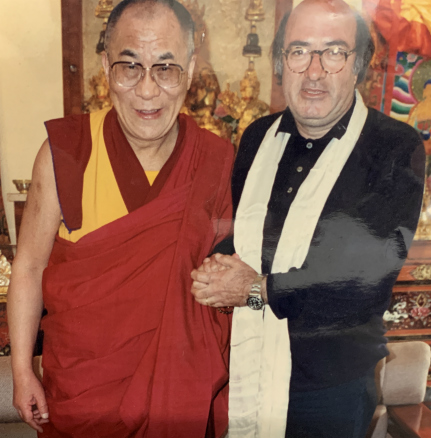 The Dalai Lama and Dante Ferretti. 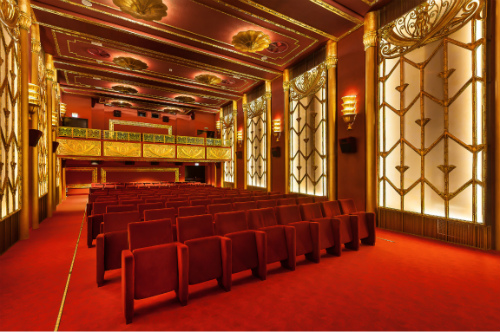 Dante Ferretti reconstructed the Cinema Fulgor, first in Rimini and then at Cinecittà. 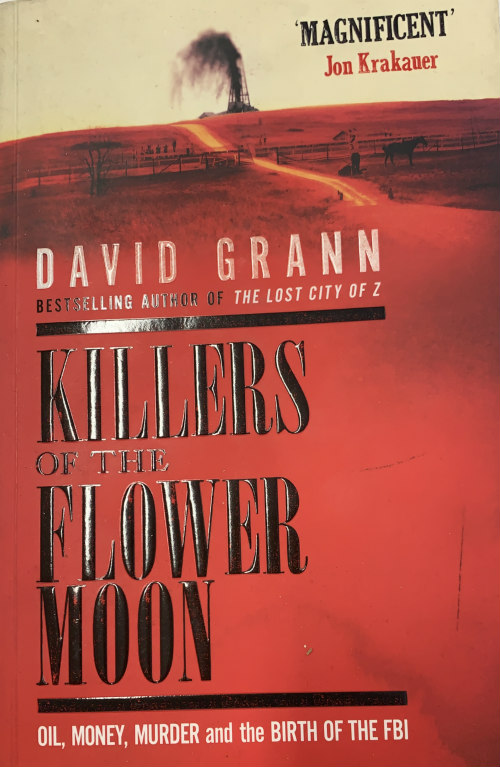 Dante Ferretti is working on a film of the book ‘The Killersof the Flower Moon’ with Martin Scorsese. It stars Leonardo di Caprio, and Robert de Niro will play William Hale, a serial killer.

“I don’t like to be seen as a maestro, though they did give me an honorary degree in architecture.”

Dante Ferretti, why don’t you ever work on Italian films?

On one hand, it is because they don’t have the budget to pay me and, on the other hand, there is a new generation of directors who have come up through the ranks with their friends who do set design or costume design.

Do you regret not making films in Italy now?

Was it another kind of cinema?

I felt I belonged more to that world. I worked with directors who were older than I was, and when they called I felt like an important scenographer chosen by an important director. I have to say that I was very fortunate because I was able to work with the best.

What about Italian cinema today?

There are some really good directors, but they tell other kinds of stories.

No, when I get to Cinecittà they bow and call out “maestro! maestro!”, but I don’t like to be seen as a maestro, though they did give me an honorary degree in architecture.

Do you think the pandemic has killed the cinema?

Not yet. There will always be cinema. Cinema is life and, fortunately, now we can leave the house, though we need to stay away from people.

Are there still ‘films d’auteur’?

Absolutely, they still exist. For example, getting back to Martin Scorsese, he is one of the greats because he has made great films and has inspired many people. He is idolized in the United States.