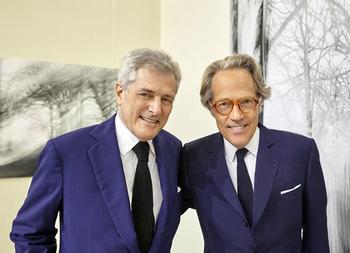 THE IMAGE MAKER. Charles March is a photographer and owner of Goodwood Estate in West Sussex where he founded the Goodwood Festival of Speed and the Goodwood Revival. I interviewed Charles March in London earlier this year while he was planning the exhibition ‘Photographs 1980-2017’, whose opening I attended and which runs from 25th May to 30th June, 2018 at the Galleria del Cembalo in Rome.

I interviewed you as Lord March for Goodwood, and now you are the 11th Duke of Richmond?

Since my father died last year Richmond is my last name, so now I am Charles Richmond, but I am still using the name Charles March for the photography. My name originally was Charles Settrington, so I was known as that in photography when I was a young man, but later on I used Charles March.  In my life my names have been Lord Settrington, then the Earl of March, then the Duke of Richmond.  My whole identity has changed, including my passport.

How many Dukes are there?

I think there are about 20 Dukes in England and Scotland.

How does a Duke like you compare to the Royal Dukes?

We have been around much longer.  Those titles are given by the Queen to a child or a cousin, but the Dukedom of Richmond goes back to 1675 and Charles II, who had a lot of illegitimate children.

What role do you have in the English structure?

Traditionally certain dukes have certain roles, and my family carry the sceptre behind the monarch at the coronation.

“I am an image maker rather than a photographer.” You kept on being an artist and are going to have your first exhibition in Italy in the Galleria del Cembalo at the Palazzo Borghese in Rome which opens on May 25th?

Yes, before I have been in America, Russia and London.

When did you start being a photographer?

I started taking pictures when I was a boy at boarding school aged 10 or 12.  Then I was at Eton, which I did not enjoy and I left very early when I was about 16.  I immediately went into the film and photography world and an Australian filmmaker who was living in London was teaching me.  He said there was a job going with Stanley Kubrick who was making ‘Barry Lyndon’.  Kubrick was a very good photographer who had worked for LOOK Magazine, and the art director was Ken Adam.  I got the job, and the film was in pre-production so I would take pictures all day and in the evening go through everything with them and they would critique my work.  I did that for about a year and it was an amazing experience at 16/17 to be around somebody where there was no compromise for anything.  It either had to be the best or it didn’t work.

What did you do next?

My formal education was pretty sketchy.  In 1972/3 I went to Africa for a year to get my own pictures in Kenya, Somalia, and Ethiopia, and when I came back to London I started taking pictures for Harper’s Bazaar and Queenand Italian Vogue.  I did reportage to start with and got very involved with complicated still life advertising, making special effects in the studio.  London was the best place for that then and it was an exciting time.

Where did you work?

I had my first big studio in a house at Parsons Green just off the Kings Road and I made a good business out of it, so was then lucky enough to be able to buy Hurlingham Lodge.  It was a wonderful house but very run down at the time, and I built a big studio on the side of it.

How long did you do that for?

I did that for about 12 years, all this was before the digital world.  I did very creative, complicated still life special effects which looked like they were impossible, and I worked for all the big advertising agencies.  Advertising then was very creative, you never even showed the product!  Many pictures took days and days to do, with complex set building and huge budgets.  The Galleria del Cembalo is going to show some of these early pictures.

Then I stopped working as a photographer and focussed on driving the business of Goodwood.

How would you define Goodwood and running it?

Goodwood is a country estate that has been in my family for 300 hundred years, and it has six sports attached to it that I have tried to reinvigorate, horse racing, motor racing, golf, flying shooting and cricket.  I have tried to turn it into a self-sustaining business so that the estate can carry on and survive.

Did you continue to take photographs?

All the time, but just for myself.  Very informal pictures of where I was, very different to those I did in the studio.  I developed a very particular technique of moving the cameras during the exposure.

“I am trying to get the feeling of what it is to be there, trying to minimise the amount of information.”

What cameras do you use?

Who were your influences?

Ben Lewin the Australian photographer who made ‘The Sessions’ in which the actress Helen Hunt was nominated for an Oscar was a big influence on me.  My photographs were of nature, and at the time the whole idea of photographing nature and the divine was prevalent.

Who buys your work?

Urs Schwarzenbach bought the first series of very big pictures for the Dolder Hotel in Zurich.  I took photos of trees all over the world for about five years before I showed anybody, then I showed an agent for a well-known photographer and then I met Edward Lucie-Smith and he said he was keen to do a show at a Gallery he had in Bermondsey and that went really well.  Three years ago we did a show in Saint Petersburg in the Marble Palaceand in Moscow.  When I was in Russia I took a lot of pictures and Tim Jefferies at Hamiltons saw those pictures and we did a show of the Russian tree pictures in London which went really well. And then with Adam Lindemann, who has a big gallery in New York, I did a show of more trees and that went really well.

Is photography an art?

It’s a craft, and I believe it is art and I am selling it as art.  The camera is moving around, and the direction the camera moves is critical.  It’s very hit and miss and unpredictable so I am shooting thousands of pictures to get one.  I am trying to create a feeling of a place.

What size editions do you make?

I do all the printing myself.  Some editions are just one and some are three.

Are they very expensive?

The small ones are about £4,000 and the most valuable £25,000.  I do most of them both small and big; some are huge inkjet prints almost the size of the wall of a living room.

What are you showing in Rome?

A mixture of all the trees including some of the Russian ones, and I did a show a year ago in LA of big sea pictures taken in Eleuthera in the Bahamas.  Again the camera is moving so it’s very complicated with the sea moving and the camera moving!  I am trying to get the feeling of what it is to be there.  The exposure is very slow so they are like a quick sketch trying to give an impression of the place.

How many are going to Rome?

25 of the big ones, trees and seascapes, and I am also launching a book of 25 photographs that were taken onthe island of Jura on the West Coast of Scotland, where William Astor my brother-in-law has an estate. “I am trying to convey what is going on inside myself at that time.”

What are you doing with the moving the camera technique?

I am trying to minimise the amount of information.  In photography you have so much visual information it can become a burden.  Moving the camera reduces the information in the image.

When do you work?

At night, in my own time, or when I am away.  I have thousands of pictures I haven’t really looked at, so I am working my way through them.  I love the whole process and the technology.

Has photography changed much since you started?

Dramatically.  It has gained some things and lost some things.  In the days of working in advertising photography did not lie, but now with digital special effects you don’t believe it any more.  One of the joys of photography in those days was the fact that it never lied.

What is photography for you?

It was always more than a job, it started as a passion.  I have loved being able to express myself in this way from when I first bought a Pentax at school.  I felt it was something I could do, and people also responded well to what I did.  I loved being on my own in the dark room, and people were very positive about it, my parents encouraged me and that was also helpful.  I fell in love with it at an early age and I have now done it for 50 years, so it has been a very important part of my life.  I can do it very privately.  I had no alternative to trying to make a success of Goodwood, but the photography is me, and when I have a difficult day my step is lighter if I have a photography project on the go.

Do you always travel with your camera?

I do, but I don’t always take pictures.  I need to get into the zone of feeling where I am and be on a bit of a mission to go and do it by myself.  I don’t have to do it for anybody else.  I ask myself why am I doing this double work and giving myself a headache.

What is the zone of feeling for you?

Trees have always played a big part in my life and I am trying to convey what is going on inside myself at that time, and when I look at a sea view that hasn’t changed for millions of years nevertheless I am making an impression and doing things to disturb that environment with whatever is going on for me at that time.  I am an image maker rather than a photographer.

Do you have a main gallery?

Tim Jefferies at Hamiltons Gallery in London and Adam Lindemann in America.

What is your next series of images going to be about?

Perhaps more about people, where people become part of the impression of the place as well.