Beware of auction valautions and take more than one opinion 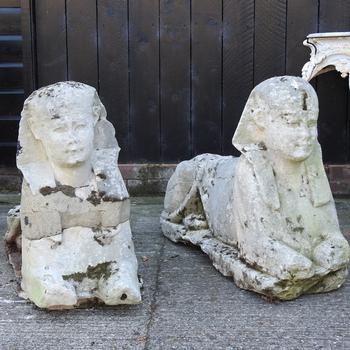 These Sphinx Patio Ornaments Were Offered for $700 at an English Auction House. Turns Out They’re Ancient—and Sold for $265,000 Two sphinx statues that sold for $266,000 this month. Courtesy of Mander Auctioneers.

Last weekend, a pair of sphinx statues were offered up at a small auction house in England. Weatherworn after spending the last 15 years in the garden of a local couple, they were estimated to fetch £300 to £500 ($410 to $680).

Mander Auctioneers, the Suffolk-based firm that organized the sale, described the three-foot-long sculptures as 19th-century replicas of Egyptian sphinxes. But bidders seemed to have known something the auctioneers didn’t.

“Opinion was that they were genuine ancient Egyptian examples, which had somehow passed through recent history as 18th century copies,” the house said in a post-sale statement. An unidentified gallery ended up walking away with the statues, paying over £240,000 after the 24 percent buyer’s premium. The next highest price paid for an item during the night’s sale was just £3,200 ($4,400), for an oak dresser.

The couple that owned the sphinxes contacted Mander and his team earlier this year, when preparing for a move. They had purchased the statues for a “few hundred pounds” at another sale 15 years ago, the auctioneer explained, then stuck them on their garden patio for decoration.

One of the statues had broken under the care of its owner before that and was reattached with cement by a local masonry expert. “All the time they sat there and they [the sellers] had no idea what they had in their garden,” Mander told the BBC.

Upon first seeing the statues, Mander’s staff assumed they had been acquired by British gentry during a tour of Europe, likely in the 18th or 19th centuries. “And we’ve just presumed they were 18th century Grand Tour items,” he explained to CNN. “As it turns out they’re thousands of years old and genuine. So it’s quite amazing really.”

The auctioneer explained that work is now being done, post-sale, to identify the statues’ true provenance.

Representatives from Mander Auctioneers did not immediately respond to Artnet News’s request for comment.