A Short History of Desks 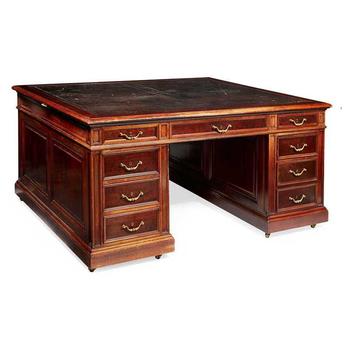 The term desk stems from the Medieval Latin ‘desca’ meaning ‘table to write on’ and most of the desk forms we know today were designed in the 17th and 18th centuries.

Over time the designs of desks have changed so greatly, that the term includes several types:

The French term 'escritoire' was first seen in the 18th century and was originally used to describe a small, transportable writing desk - taking the form of a fall-front writing slope over a neat-sized chest of drawers or box.

Over time, escritoire designs became larger and had a writing desk with a hinged flap, over a substantial chest of drawers or a stand. The flap would open to a writing surface with several drawers and compartments.

Developed in 18th century England, the kneehole desk has an open central selection (so that one could sit close to the writing surface) and is flanked by a pair of drawers (or pedestals). The kneehole would sometimes feature a small cupboard to the back. In the Victorian period, some kneehole desks had a more classic, simple design - but we often see cabinet makers adding their own flair!

Gadrooning is often found on kneehole desks, and is a carving technique also used across other pieces of antique furniture. The term was borrowed from the French 'godron' / 'goderon' meaning a concave ornamentation on a drinking vessel. It is a carved panel of convex curves, forming a pattern (seen below on the top edge of this Georgian style kneehole desk).

This form of desk was designed in the early 19th century so that banking partners (usually in senior positions) could work together at a pedestal desk. They are often a larger version of the kneehole desk, with a central open kneehole section flanked at either side by drawers.

You may see the term 'freestanding' being used when describing partners desks - this means that the piece is able to sit in the middle of a space and likely has drawers or cupboards to both sides. This is a term used regularly in the antiques trade, across all sorts of furniture and it means a piece could have: access from all sides (front and back), is polished to all sides, or isn't requiring support from a wall.

This was a popular desk for wealthy patrons in the 18th century, and many examples featured clever mechanical devices to open the roll top, or reveal hidden drawers.

These had a cylinder or roll top opening to an interior with drawers and compartments. Often, as the top receded back into the body of the desk, the writing surface would simultaneously move forward. One of the earlier examples was designed for Louis XV, King of France (1710-1774) and known as the 'Bureau du Roi'. A more commercial type of rolltop desk was widely made in the early 1900s and were a standard item of office furniture from the Edwardian times onwards. They were usually made in oak, with some nicer examples made in walnut and mahogany.

This term generally describes a drop-front secretaire, or a fall-front desk. It is a little similar to the escritoire, with a concealed writing suface opening to the front, over a set of drawers.