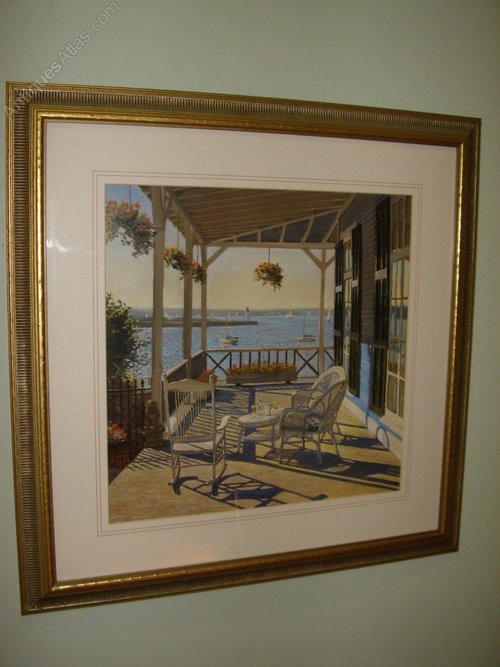 A good quality textured coloured print depicting a summer day seen from a veranda looking out towards the sea and harbour with sailing vessels and fishing boats throughout the waters.
In the foreground a solitary rocking chairs sits empty alongside a pair of wicker outdoor chairs sat around a low table full of refreshing drinks.
The comfortable relaxed looking environment is complimented by hanging baskets full of red geraniums hung from the eaves and shaded from the days hot sunshine.The picture bears a copy in the bottom left corner of the artists signature with the date 1990 alongside.ABOUT THE ARTIST
Born in 1956 and raised in Minneapolis, Minnesota, Mr. Hagen showed a strong interest in drawing and painting as a child. His training began at an early age, at the Minneapolis Art Institute. This training continued at various art schools in Kansas, Colorado, the Minneapolis College of Art and Design and the private atelier of Richard Lack, where the teachings of the Boston School so strongly influenced the young artist he decided to move to New England in 1980 in hopes of furthering his studies and career.
After earning a Bachelors and Masters degree from the Rhode Island School of Design, in 1984, he established himself as a superb painter and draftsman, eventually settling in Newport, Rhode Island. The numerous awards and honors received during and after his years at RISD quickly secured his reputation as one of the finest landscape and portrait artists in the region.
His work has since been acquired by many private and public collections worldwide. Some of the regional public collections that display his work are Brown University, Newport County Courthouse, Rhode Island State House, Providence College, the Westin Hotel, Providence and the Hay-Adams Hotel, Washington, DC. His small figure studies have been compared with 16th century Italian masters. Upon discovering this talent and acquiring his work, Steven Spielberg cast him as a 19th century courtroom sketch artist in the movie Amistad. Paintings and articles about Mr. Hagen have been published in England, Germany and throughout the United States including ARTnews, American Art Review, Newport magazines, Boston Globe, Minneapolis Star Tribune, Providence Journal, Associated Press, and United Press International.
During his years in Newport, he was introduced to another midwesterner and soon to be wife, Dede. In 1997, they were married and moved to Martha's Vineyard to raise a family. They purchased a house on Lamberts Cove Road, near Tashmoo Farm and are now year round residents along with their son, born in 1999.
Mr. Hagen is best known on the Vineyard for his scenic coastal and pastoral oil paintings. He typically creates small field studies on location, up to 16x20 in. Larger works are generally done in his Vineyard studio. He also maintains a studio in Newport, not far from the New York Yacht Club. He has traveled extensively throughout Europe, North America, North Africa, the Middle East, Bermuda, the Caribbean, Mexico, and Hawaii. On an annual painting excursion, he has traveled to Monhegan, Maine since 1992.
Brown University has not only commissioned this artist for his extraordinary draftsmanship skills in painting the likenesses of past university presidents, they have also contracted the artist for five years to produce archeological drawings at the university's excavation of the Great Temple in Petra, Jordan. The excavations conclude in 2005, with the findings to be published soon after. As seen on a National Geographic special, one of the unique features of the Great Temple are the stone, hand-carved elephant heads capitals atop its columns, found nowhere else in the world. Although the time commitment is just a few weeks each summer to gather field drawings on location, most of the finished drawings are complete over the winter. This schedule allows Mr. Hagen to capture, on canvas, the same unique landscapes that draw so many to these beautiful islandsNicely presented under glass to protect inside a ribbed 1.75 inch width wooden gilded frame with 2.5 inch border.MEASUREMENTS (Including Frame)
Height 24.5 Inches (62cm)
Width 24.5 Inches (62cm)TELEPHONE 07765 856171
HOURS 10AM - 10PM 7 DAYS A WEEK BY APPOINTMENT ONLYDELIVERY UK MAINLAND & WORLDWIDE / QUOTES ON REQUESTOUR REF 0594 A colourful detailed collectors print.