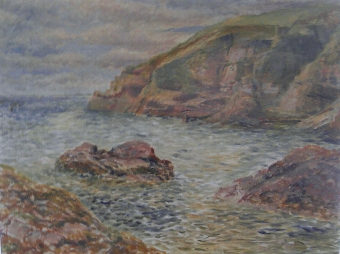 21st Century Gallery @ AM Fine Art has 21 antiques for sale.
click here to see them all

GOOD QUALITY OIL PAINTING OF A COASTAL SCENE IN SCOTLAND.

HELMUT PETZSCH (1920-2008)Helmut Petzsch was born in Berlin in 1920 and his family escaped persecution at the hand of the Nazi’s by moving to Scotland in 1933. Like a agreat many German families they were interned at the start of the war on the Isle of Man. They were soon released and returned to Edinburgh where the young Helmut studied at Edinburgh College of art from 1947-51. Here he was taught and greatly influenced by Sir William Gillies RSA. Gillies encouraged his painting and in 1951 he started a series of works revolving round the circus and the people involved. This culminated in 2 major works being exhibited at the Royal Scottish Academy in 1952.
They were both titled “The Circus” with Catalogue no’s. 439 and 631.
Helmut went on to teach art and exhibit regularly at the Royal Scottish Academy and the Society of Scottish Artists. At the SSA he became a mainstay of the Society during the 1950’s to the 70’s. He died in 2008.
A fine artist with a light touch and as yet underrated due to his illness which precluded him from painting when 20th C. Art was being re evaluated in the past 20 years.

21st Century Gallery @ AM Fine Art has 21 antiques for sale.
click here to see them all