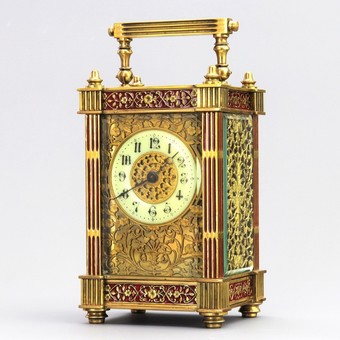 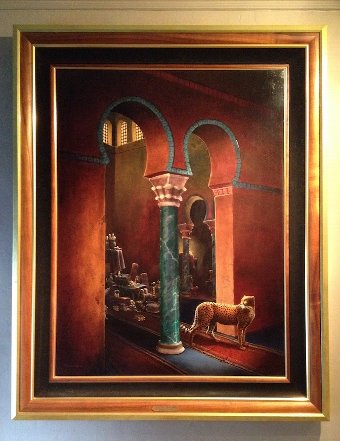 Gage Taylor and Uriél Dana rarely painted large oils. Hindsight is one of the three largest. Painted on multiple sanded coats of gesso on a surface as smooth as skin and in layers of oil glazes that create a multidimensional depth. This painting embodies every universal archetype from the East, the West, and the Middle East found in a Taylor Dana painting.

In the photos to the left, the first picture shows the painting lit, the second shows the painting without lighting.The Symbolism in the Painting
“Many cultures around the world use the temple as a symbol for the body, either literally, like the great cathedrals of Europe, or metaphorically, as in the chakra system. The body or temple represents a portal to our soul in a Taylor-Dana oil.
Each of us is a temple of treasure, and as we explore that treasure, we often discover jewels within ourselves we may not be aware of. (The hidden treasure in the background).
We used carpets as the symbol for the secret doctrines, inspired by the flying carpet legends, which evolved from the use of prayer rugs.
Cats, large and small, were used in temples all around the world because of their ability to sense the non physical as well as the physical. Cheetah’s were a favourite of ours because they are the most telepathic and dog-like of the feline kingdom. Joy Adamson (author of the well known book and movie, Born Free) kept and studied Cheetahs for years and revealed their astonishing personalities in a book called, The Spotted Sphinx. We use them as a symbol of the higher self.” Uriél DanaAdditional Painting Information
Hindsight is painted in oil on canvas. Parts of the canvas have over 50 glazes giving it a mystical, almost glowing effect when lit with a dimmer. The frame was designed by the artists . It is handmade in Hawaii out of hand rubbed koa, gold Italian moulding, faux suede fabric covered scoop. (Uriél Dana is a vegetarian).Hindsight is from the private collection of the artists. (After Gage Taylor’s death in 2000 it stayed with Uriél Dana who owns the copyright). It was included in a one person museum exhibit of the collaborative artists in 1993. Entitled “The Mythic Image”, 60 paintings of the artists were exhibited at the Egyptian Roscicrucian Museum in San Jose, California. The Museum commemorated the event with their first poster in 70 years (Taylor-Dana’s “Honoring the Goddess”).
Hindsight was also a best selling card with both Queens Cards and Milk and Honey Publishing. It was distributed in the USA, Europe, Australia, and Japan.
Hindsight was in a brochure published by Conacher Gallery of Maiden Lane, San Francisco, who represented the Artists until his death.MEASUREMENTS
----------------
60" x 47" Framed
40" x 30" UnframedFor international buyers we offer a 10% discount to help defray shipping costs.SHIPPING
--------------
Please contact us before purchase to confirm shipping requirements.About the Artists
---------------
Uriél Dana has been honored for her work as a fine artist, writer, and lecturer for over two decades, in 12 countries on 4 continents. In addition to her three decade painting career, Uriél collaborated for 17 years with internationally acclaimed painter Gage Taylor until his death in 2000. They worked & traveled together internationally as Ambassadors of the Arts for the US State Department, “Arts in America” program.Their work is included in many private, corporate & celebrity collections.Gage Taylor is considered one of the six originators of what came to be known as “California Visionary Art" (see the book Visions published by Pomegranate Press).Gage Taylor's work was featured in Newsweek, Omni, and other publications. Mescaline Woods, considered a pivotal painting at the time, is owned by the Haggin Museum in Sacramento. It is included in the book "25 Years of the Art of the San Francisco Bay Area" and was in the exhibit at the Oakland Museum based on that book.Taylor's work has exhibited in The Smithsonian, The Whitney Museum, San Francisco Museum of Modern Art, Huntsville Museum. Internationally he exhibited at The Paris Biennale, The India Triennale, and in Italy, Germany, Japan, Chile, Peru, and Nepal.Uriel Dana became Gage Taylor’s apprentice is 1983 and by 1985 their collaborative work had surpassed their individual work from their patrons. They continued to work together until his death.

Art, Antiques, Rare Treasures & Other Curiosities. We are based in the San Francisco Bay Area, California. You can also see more items in our store: Treasure Chamber

Other antiques available from treasure chamber