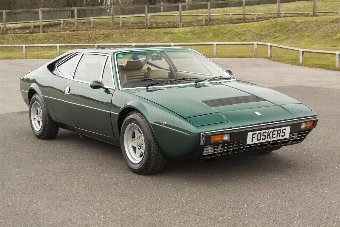 Every single mid-engined V8 Ferrari up to the new 488 GTB can be traced back to the 308 GT4. Bertone’s bold, angular car was the successor to Pininfarina’s svelte Ferrari Dino 246 GT, and with a transverse-mounted engine, the design allowed for a 2+2 seating layout.

Ferrari’s Dino 308 GT4 is a wonderful car to drive, with a powerful and flexible 3.0-litre V8 and fully independent suspension, which allows for fast, relaxed and comfortable progress. The Ferrari was a smash hit with the motoring press at the time, with Motorsport magazine’s 1974 road test concluding: ‘This must be the car for which nearly every Dino 246GT owner has been waiting’. In Autosport magazine, John Bolster added, ‘It is delightful to drive and worthy of bearing that most famous name’. This particular Ferrari 308 GT4 is an outstanding example, finished in the rare combination of Verde Pino Metallizzato with the optional full leather interior in cream hide. The Ferrari was also ordered new with air-conditioning and a heated rear windscreen. The first owner of this 308 GT4 was the managing director of a London clothing company. He was adamant that he did not want a red Ferrari, so chose this superb green hue from the colours offered. It was supplied new via H.R. Owen and was first registered on 26 January 1978. For the first two years of its ownership, the car was looked after by Maranello Concessionaires’ own service centre, but once it was purchased by its second keeper in June 1980, it was entrusted to a highly respected marque specialist, which was then based in Middlesex. The third owner acquired this beautiful Ferrari in November 1981, by which time the mileage stood at around 37000. He kept the car for nearly two years, thoroughly enjoying it, and adding some 13000 miles to the total. Throughout the 1980s and well into the 1990s, the car was cared for by three of the most well-known Ferrari specialists of the time, keeping it in fine fettle. The sixth owner had bought the car in the late 1980s, only selling it on in 1997 when it had covered approximately 80000 miles from new. More recently, the car has been treated to an exhaustive restoration, including a bare-metal repaint in the original factory colour, engine and gearbox rebuilds; stripped and rebuilt carburettors, renewed fuel and brake lines, fully restored suspension and brakes; full stainless steel exhaust system, all new water and oil hoses, fully refurbished interior trim and renewed rubber body seals throughout. As you would expect, all of this work is documented in the vast history file, which also includes invoices dating back to 1980. The substantial folder also features a complete record of ownership provided by the DVLA. Foskers has sold more Ferrari 308 GT4s over the last two years than anyone else, and this car is quite simply one of the best we have ever seen. Few - if any - GT4s have received a restoration as extensive as this car, and in such a rare and beautiful colour scheme it is a truly superb and head-turning classic Ferrari. For more information about this Ferrari Dino 308 GT4 for sale in Kent, or to arrange an appointment, please contact our sales team on 01474 874555 or 07921 430430. Download PDF
Back to current stock